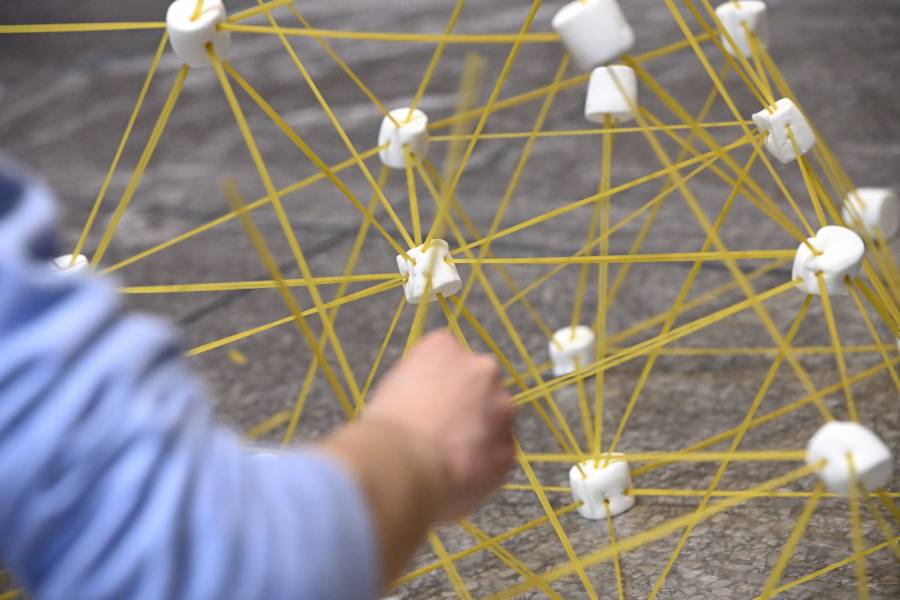 Some say the strongest building material is steel; others say concrete or iron. But for some Baltimore middle schoolers this week, it was Barilla spaghetti and Wegman's brand marshmallows. With just 30 minutes to create the next Empire State Building or Egyptian pyramids of Giza, students vied for the top spot in this year's Tower of Power event, hosted Tuesday afternoon in the Glass Pavilion on the Johns Hopkins Homewood campus by the university's chapter of the Society for Women Engineers.

Part of the Whiting School of Engineering's annual celebration of National Engineers Week, or E-Week, the Tower of Power is a friendly competition designed to engage members of the Johns Hopkins and greater community and to inspire the next generation of engineers. Each year, participating teams of undergraduates, graduate students, staff, alumni, and area middle school students are tasked with building the largest structure they can with the edible materials provided, putting their engineering acumen to the test.

As introduced by Ed Schlesinger, dean of the Whiting School, the Tower of Power is the "signature happening" of the university's E-Week festivities. This year, teams from McDonogh School, Waldorf School of Baltimore, Perry Hall Middle School, Maryvale Preparatory School, and The Summit School participated.

With last year's competition held virtually, SWE members were excited to welcome competitors back to Hopkins for the organization's third year hosting the event.

"I'm really glad we got everyone out here to participate and inspire our young, future engineers," said Olivia Arbogast, SWE member and a second-year biomedical engineering major. "The last [event] was all online with people submitting pictures of their tower, so it was really fun to see everyone come in here with all their energy."

The afternoon of the event, the Glass Pavilion buzzed with excitement from both competitors and their supporters as builders raced against the clock.

With glory, bragging rights, and gift cards on the line (and toppling towers threatening their victories) you could snap the tension in the room like an uncooked spaghetti noodle. Though emerging structures around the room varied in height and design, many groups followed the reliable pyramid method for their build.

Jolee of McDonogh School said her team's strategy for the event was well planned, even down to the length of each spaghetti noodle beam.

"The base would be six by six [marshmallows] on each side, connected by one-third of a spaghetti [noodle], and then we would build a whole pyramid," she said. While their strong base looked promising, time got the best of Jolee and her partner Ally, and their tower fell apart before the final judging.

Students from The Summit School had to alter their plans mid-build due to uncooperative materials, but their edifice still earned the "Most Creative Tower" prize, an honor introduced this year and judged by Schlesinger. It may not have been the tallest tower, but their ability to build around a slowly tilting structure earned their team top spot in creative engineering.

However, at the chime of the bell, the Johns Hopkins undergraduate trio of second-year economics major Ellie Chen, first-year mechanical engineering major Jonik Suprenant, and first-year applied math and statistics major Annie Wang were crowned the 2022 Tower of Power champions with a staggering structure measuring 57 inches.

Arbogast of SWE shared her final thoughts as the collection of towers came tumbling down, "A lot of engineering is flexibility and changing the game as you go," she said.

But luckily, these engineers' future endeavors will not involve materials that are made of carbohydrates.