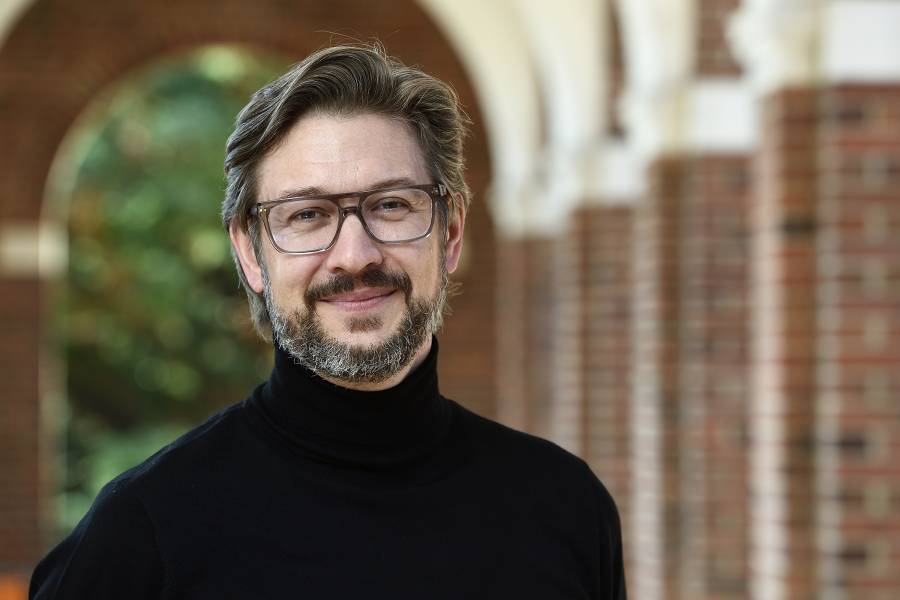 As the new director of Johns Hopkins' Expository Writing Program, Pavesich is focusing on one of the earlier stations along that lifelong route: the undergraduate period. The program will deliver a writing class to every first-year student in the Krieger School of Arts and Sciences beginning in spring 2023 and will offer writing instruction integrated into each Krieger School major throughout a student's career.

"Writing programs can't always count on the attention, support, and investment that Hopkins is showing now. This is a rare opportunity," Pavesich says.

Hopkins' approach to undergraduate writing instruction shifted with the 2020 arrival of CUE2: the set of recommendations by the Second Commission on Undergraduate Education that will guide the university's teaching and learning model for the next 10-plus years. Among other priorities, it calls for instruction in six "foundational abilities," the first of which reads: "Students should recognize the importance of language and have a command of it as readers, writers, and speakers."

"Writing is about people. That's why it's so important to study and teach it, but also to love it and be careful with it because it's a way of caring for others."
Matthew Pavesich
Director, Expository Writing Program

With his background in rhetoric, pedagogy, and the public humanities, Pavesich stands poised to lead the Expository Writing Program into a new era of depth, breadth, and adaptability. One of the first orders of business is hiring: To meet the new first-year requirement, the program's faculty is slated to almost triple in size over the next two years, with new hires hailing from a variety of disciplinary backgrounds—though all will bring expertise as both writers and teachers of writing. In the longer run, Pavesich expects the program to offer advanced undergraduate and, later, graduate courses in topics including advanced academic writing, writing in digital environments, public writing, professional writing, and maybe even personal writing—all in partnership with a range of departments and possibly community organizations, he says.

Pavesich envisions the first-year writing class as a "dynamic space" where students will learn to be "agile writers." "Being an agile writer means being able to adapt to new styles, forms, and processes of writing but also anticipating the need to adapt," he says. "It helps students to understand that one writing class isn't an inoculation; no one ever gets to the point where they'll never again need to think critically about their own writing. Our classes will help students become agile writers by assigning a wider variety of genres and inviting students to write for a number of different audiences within one semester. It's by pivoting from one genre or audience to another that students begin to see how they can become agile writers throughout their lives."

While many universities offer writing support to first-years, Pavesich sees Hopkins' writing instruction requirement as key. "Writing instruction is important enough that we should neither leave it to students to opt in nor should we require it and then grant lots of student exemptions, as is the case on so many campuses. This is going to be a genuinely universal writing experience shared by all Krieger first-years," he says.

He also plans to pay explicit attention to what the research calls "transfer," where students are trained to take knowledge learned in one context and apply it to new ones. The training involves thinking about rhetorical framework, analyzing your audience, and teaching yourself to write in a new genre you might encounter in a new job or a new lab, for example. "You basically profile the genre, analyze how it does what it does. And then you make your choices as a writer within those conventions when it's your turn to write in that form," Pavesich says.

Raised in Bristol, Illinois—a town of about 30,000 approximately 50 miles west of Chicago—Pavesich earned a bachelor's degree in English Literature/Secondary Education from the University of St. Francis (Illinois) in 2000, and went on to earn master's and PhD degrees in English at the University of Illinois at Chicago.

In his doctoral program, Pavesich started out studying 17th-century poet John Milton under expert Stanley Fish. But everything changed the moment he entered the classroom to teach his first course in first-year undergraduate writing as required by his doctoral funding, sending him down a very different path.

"It just cracked everything open," he says. "It changed my scholarly research focus, it changed my entire professional trajectory. The intellectual challenge of it, the human element of teaching writing, to me is magic."

Pavesich says he was drawn to the field by how "big" writing is. When considered through a lens of rhetoric, he says, it includes speech, informal messages, and facial expressions, becoming nothing less than the very ways we connect. "Writing is about people. That's why it's so important to study and teach it, but also to love it and be careful with it, because it's a way of caring for others," he says.

"I want to build a writing program that is a leader in innovative pedagogical approaches. I want us to be the folks that people want to partner with for cool new classes, new initiatives, new projects."

Teaching writing tapped into a sense of urgency for Pavesich, one where he experienced a coalescence of the intellectual and emotional needs of first-years who, he says, recognize that they will need to write differently throughout their lives, and also recognize that they don't feel well equipped to do so. The solution has to do with skills and confidence, he says, but also with the need so many cultural observers have recently articulated for democratic citizens to develop a strong grasp of literacy as well as their own ability to interact in the public square.

"All this stuff is so urgent, and it's packed into what I think a writing program takes as its major task," Pavesich says.

Following graduate school, Pavesich served as a lecturer in English at the social justice–oriented Roosevelt University in Chicago, then followed his wife to Washington, D.C., for her new job. Since 2011, Pavesich taught English at Georgetown University, becoming associate director of Georgetown's Writing Program in 2015.

Since arriving at Hopkins in fall 2021, Pavesich has sipped a lot of coffee with a lot of new colleagues. It's part of his effort to deepen the program's connections across the university. "I want to build a writing program that is a leader in innovative pedagogical approaches," he says. "I want us to be the folks that people want to partner with for cool new classes, new initiatives, new projects. I want to send the message that we're open for business. Our mission spans the entire campus. We can't do our job without being connected to everybody." 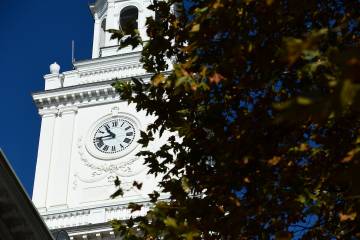