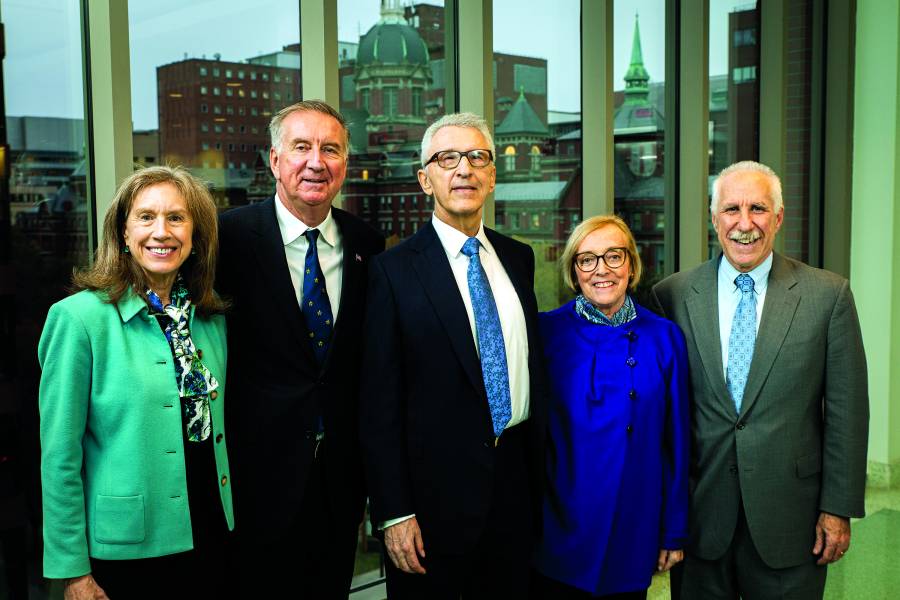 After losing his sight as a college student, Sanford "Sandy" Greenberg, an emeritus trustee of Johns Hopkins University and Johns Hopkins Medicine, vowed to end blindness "permanently and for everyone." Now, to further that goal, the Johns Hopkins Wilmer Eye Institute has launched the Sanford and Susan Greenberg Center to End Blindness, with support from several philanthropists, including Wilmer board member Allan Holt and his wife, Shelley.

"When I woke up newly blinded, I promised God that I would do everything I could for the rest of my life to make sure no one else would go blind," Greenberg says. "It was an insane, adolescent promise, but it stayed with me all this time. The launch of this center means the end of blindness is near."

In planning the center, Greenberg says he wanted to inspire promising early-career researchers who have an abundance of high-risk, high-reward ideas but lack the funding to pursue those ideas.

Funds for the new center will initially create four rising professorships for young scientists specializing in research toward eliminating blindness, providing a stable source of funds to cover their salaries and many other expenses associated with their research for up to seven years each to get their careers—and their potentially transformative research—off the ground. Such professorships are usually aimed at more senior, established scientists.

"That sort of unrestricted support, coming at such a juncture in a young researcher's career, is critical," says Peter McDonnell, director and William Holland Wilmer Professor of Ophthalmology at the Wilmer Eye Institute at Johns Hopkins.

"If you're a young researcher and you're competing with established, often very famous senior people who have very large research teams, it's very challenging," McDonnell says. "Sandy and Sue's efforts mean that these brilliant young scientists will get up to speed at an age closer to 30 than 50."

Greenberg plans to work with Wilmer Eye Institute leadership to raise up to $100 million to fully endow the center and to ensure it fulfills its ultimate goal of ending blindness for everyone.

In a December 2020 ceremony streamed worldwide, Sandy and Sue Greenberg awarded $3 million to researchers around the world who are spearheading the drive to end blindness.

"Vision loss remains a significant problem for millions of people around the world," says Paul B. Rothman, dean of the medical faculty of Johns Hopkins University School of Medicine and CEO of Johns Hopkins Medicine. "This generous gift will significantly advance our work to develop innovative strategies to treat and prevent blindness. We are so grateful to Sandy and Susan Greenberg for their tremendous support, and we especially appreciate their willingness to foster research from younger faculty members."

In addition to directly funding early-career researchers, the Greenberg Center will provide mentorship and grant-writing resources to help young scientists apply for competitive federal research grants much earlier in their careers than they previously would have.

As an inventor, entrepreneur and public servant, Greenberg has long worked to better the lives of those who are blind. Early in his career, he invented and patented a speech-compression machine to help blind people process sound at increased speeds. He also chaired the federal government's Rural Health Care Program, created by Congress to bring the benefits of telemedicine to America's rural areas, and was a member of the National Science Board. Greenberg currently chairs the board of governors of the Wilmer Eye Institute.

"Those of us at Wilmer can imagine no more noble goal to which to dedicate our professional lives than to end blindness," continues McDonnell. "The Greenbergs have been instrumental partners in this pursuit."