An invitation to unravel a mathematical mystery

The Krieger School's Yiannis Sakellaridis earned the prestigious honor of speaking at the International Congress of Mathematicians, where he'll discuss a conundrum known as L-functions 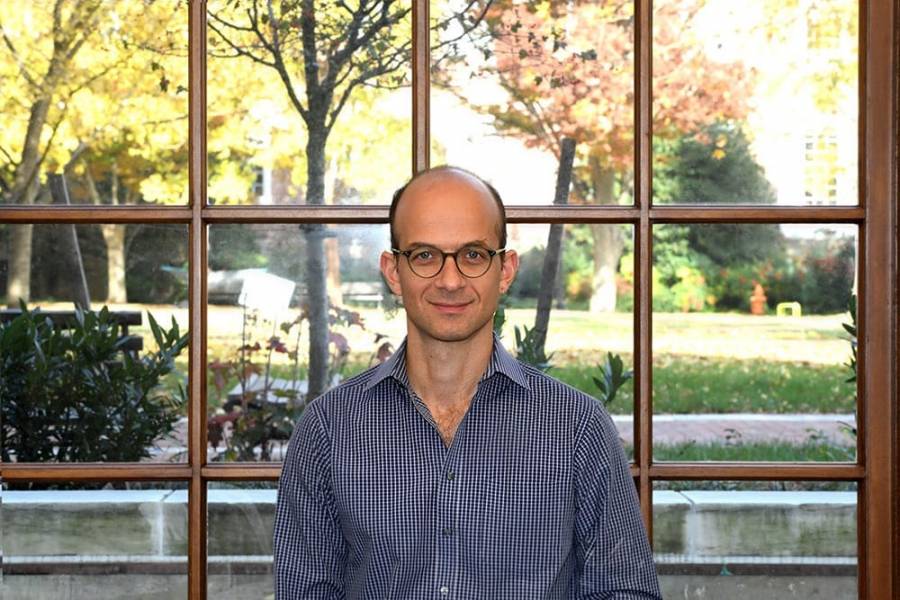 Like a non-competitive Olympics of math, the International Congress of Mathematicians is held every four years, in a different city each time. By invitation only, top mathematicians from around the world speak about their work in one of 20 topic areas, with just about 10 speakers in each area. There is even the occasional medal: Most notably, the Fields Medal, which is the highest prize in mathematics.

Next July, when the conference is held in St. Petersburg, Johns Hopkins University's Yiannis Sakellaridis will be among those elite few. A professor in the Department of Mathematics in the university's Krieger School of Arts and Sciences, Sakellaridis is the fifth member of the department's current faculty to have been invited to speak at the ICM.

"An invitation to speak at the International Congress of Mathematicians, held every four years, is one of the biggest honors in mathematics," says David Savitt, who chairs the math department.

"L-functions and their properties are pointing us toward big mysteries in mathematics, and every time we manage to understand something about these mysteries, suddenly we see connections between different fields."
Yiannis Sakellaridis
Department of Mathematics, Krieger School

Sakellaridis, who arrived at Hopkins in 2019, studies L-functions, which are analytic objects that arise in number theory. L-functions, also known as zeta functions, are continuous functions that can be attached to discrete problems, shedding considerable light on them, Sakellaridis says.

So, historically, mathematicians would tackle them on a case-by-case basis, he says, coming up with ways to represent one function at a time and deduce some of its properties. The best known of these is the Riemann zeta function. The Riemann hypothesis is often considered to be the greatest open problem in mathematics.

Sakellaridis wanted to put L-functions into greater context, so he spent more than 15 years working to understand the methods by which mathematicians study them in order to describe a uniform approach. That context is a large set of mathematical conjectures known as the Langlands program, which relates discrete questions in number theory to the frequencies of certain higher-dimensional "drums," or arithmetic manifolds. Eventually, Sakellaridis was able to piece together the developments that had occurred in various fields over the previous two decades into a larger explanation, and helped develop the "relative" Langlands program, extending the classical one.

"I just found a coherent way to think about these examples," he says.

As Sakellaridis and his collaborators continue to work on these issues, they have unearthed even deeper explanations of L-function representations, he says, even discovering an unexpected linkage with mathematical physics. This fits the objects' reputation: Everyone knows that L-functions are very important objects, he says, but their true significance lies beyond their known applications.

"The importance of these objects is that every time that we manage to discover something about them, our understanding of broader issues becomes much better. Every time that someone tried to solve the problem about L-functions, it opened up many other doors," he says. "L-functions and their properties are pointing us toward big mysteries in mathematics, and every time we manage to understand something about these mysteries, suddenly we see connections between different fields."

At the second ICM, held in Paris in 1900, German mathematician David Hilbert presented his famous list of 23 unsolved problems for the new century, some of which have since been solved, but some of which are still motivating active mathematical research to this day, Savitt says.

"In the spirit of Hilbert, the program committee for the ICM works hard to invite speakers who can best reflect on the preeminent developments of the past four years and suggest significant directions for the future," Savitt says. "In the research area for which Professor Sakellaridis has been invited ('Lie Theory and Generalizations'), at most nine people are invited to speak at each ICM, so every ICM speaker is truly at the pinnacle of their area. With this invitation, the ICM program committee is signaling that Professor Sakellaridis's vision for a 'relative Langlands program' and 'relative functoriality' is of major importance for the coming years, or decades."

"I guess I got a bit lucky," Sakellaridis says of his research. "But I also was a bit willing to look at things that people were used to taking for granted and weren't questioning. Someone came up with this way of writing down this L-function and everybody would be happy with it and just use it for applications, but I wanted to understand why this works, and I couldn't find a satisfactory answer, so I started looking. Instead of trying to find a similar ad hoc interpretation for a new L-function, I went back to things that were already known. And I realized that they were connected in ways that had not been understood."