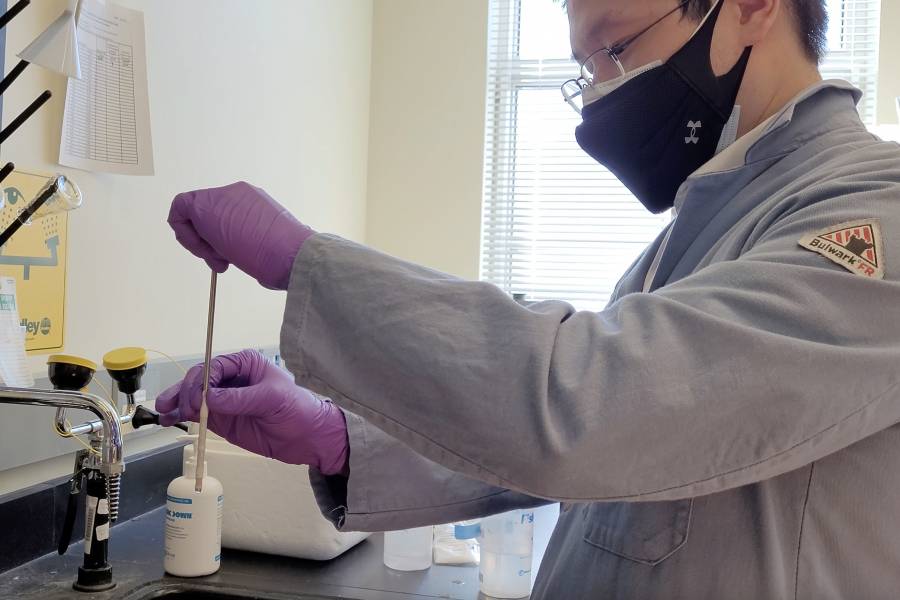 A team of Johns Hopkins University students are among the finalists in the Collegiate Inventors Competition for inventing a device to reduce pain from nerve damage in people with amputations.

Johns Hopkins has had finalists or winners 37 times in the annual competition, which was founded by the National Inventors Hall of Fame to encourage innovation and entrepreneurship at the collegiate level.

Under the team name Innerva, the Whiting School undergraduates invented a funnel-shaped biodegradable device to help direct the regrowth of nerves and prevent the formation of tumors called neuromas that cause severe pain in up to 80% of amputation patients. 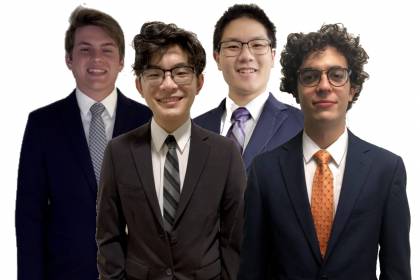 Unlike treatments that stop nerve regrowth completely, this procedure is compatible with advanced prosthetics that use nerve signals to direct movement. A surgeon takes the severed nerve, which is usually larger, and sutures it to a smaller motor nerve, Zhou explained.

"However, because of the mismatch in sizes between the severed nerve and motor nerve, the procedure has around a 30% failure rate," Zhou said. "Our goal was to address that size mismatch and allow for a tapered regrowth of the nerve."

The invention has a flexible outer sheath that guides the direction of nerve regrowth and contains a proprietary gel containing a bioactive agent that slows nerve regeneration.

"We're aiming for an almost paradoxical outcome where we're facilitating the regrowth of the nerve toward a target muscle, but also preventing it from disorganized overgrowth," Zhou said.

Team advisor Hai-Quan Mao, associate director of the Johns Hopkins Institute for NanoBioTechnology, said the students' organizational and leadership skills were critical for the success of the device. Enzmann noted that an interdisciplinary approach among the team members was another key to their success.

Early studies show that the device enhances normal nerve growth, prevents neuroma, and reduces pain and muscle atrophy in the area fed by the motor nerve. The team has secured a provisional patent and plans to conduct additional studies before hopefully moving to clinical testing.

As finalists, the team will present their inventions Oct. 13 in a virtual format to a panel of judges composed of the most influential inventors and invention experts in the nation—National Inventors Hall of Fame Inductees and United States Patent and Trademark Office officials. Winning teams will be announced on Oct. 14.