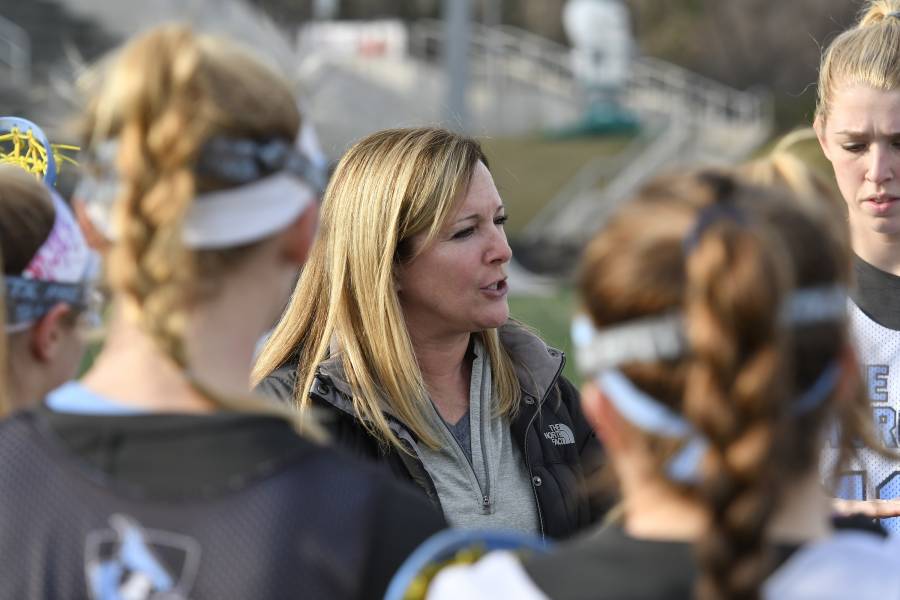 Tucker, who has led the Blue Jays to 303 wins since her arrival in 1993, announces that she will retire at the end of the 2022 season

Janine Tucker, who has served as the head women's lacrosse coach at Johns Hopkins University since 1993, announced today that she will retire from coaching at the conclusion of the 2022 season. Tucker is the longest-tenured head coach in program history and the second-longest tenured women's coach in any sport in school history.

"My 28 years as the head coach at Johns Hopkins have been as fulfilling and amazing as anything I could possibly have wished for when Bob Scott put his trust in me to lead this program," Tucker said. "The successes we've enjoyed are only a small part of what this experience has meant to me and my family. The relationships with the young women who have represented our program are what has truly made my time at Johns Hopkins so special; those player-coach relationships have grown into treasured life-long friendships that I will carry with me long after the 2022 season."

"The relationships with the young women who have represented our program are what has truly made my time at Johns Hopkins so special; those player-coach relationships have grown into treasured life-long friendships that I will carry with me long after the 2022 season."
Janine Tucker
Hopkins women's lacrosse coach

Tucker will enter her final season with a career record of 303-171, good for a .639 winning percentage). Included in that mark is a 235-155 (.603) record since she successfully transitioned the program from Division III to Division I in 1999.

"The decision to retire as a collegiate head coach, while difficult, came after some long, careful consideration and many conversations with our Director of Athletics, Jen Baker," Tucker said. "When I initially discussed this possibility with her, she was very supportive of my thought process and encouraged me to take as much time as I needed to work through this decision. I recently shared with her that the 2022 season will be my last; it is the right time."

A 1989 graduate of Loyola University Maryland and a member of the Greyhound Athletic Hall of Fame and the US Lacrosse Greater Baltimore Chapter Hall of Fame, Tucker has led the Blue Jays to double-digit win totals in 22 of her 28 seasons, nine NCAA Division I tournament appearances, three ECAC Division I championship games, and four NCAA Division III tournament appearances. In a career filled with thrilling victories and big moments, Tucker's most recent milestone came on April 18, 2021, as she became just the ninth coach in NCAA Division I history to reach 300 wins when her Blue Jays beat 13th-ranked Penn State.

The Blue Jays have enjoyed their most consistent run of success at the Division I level in the last eight seasons. During that time, Johns Hopkins has qualified for the NCAA tournament six times, including each of the last three full seasons (2018, 2019, 2021), and won 83 games.

"We are truly thankful to Janine for not just the highly-successful program she has built, but also the first-class manner in which she and her players have represented Johns Hopkins on and off the field," Baker said. "I look forward to enjoying her final year as our head coach and utilizing her nearly three decades of experience to help us craft a vision for the future of the program she built." 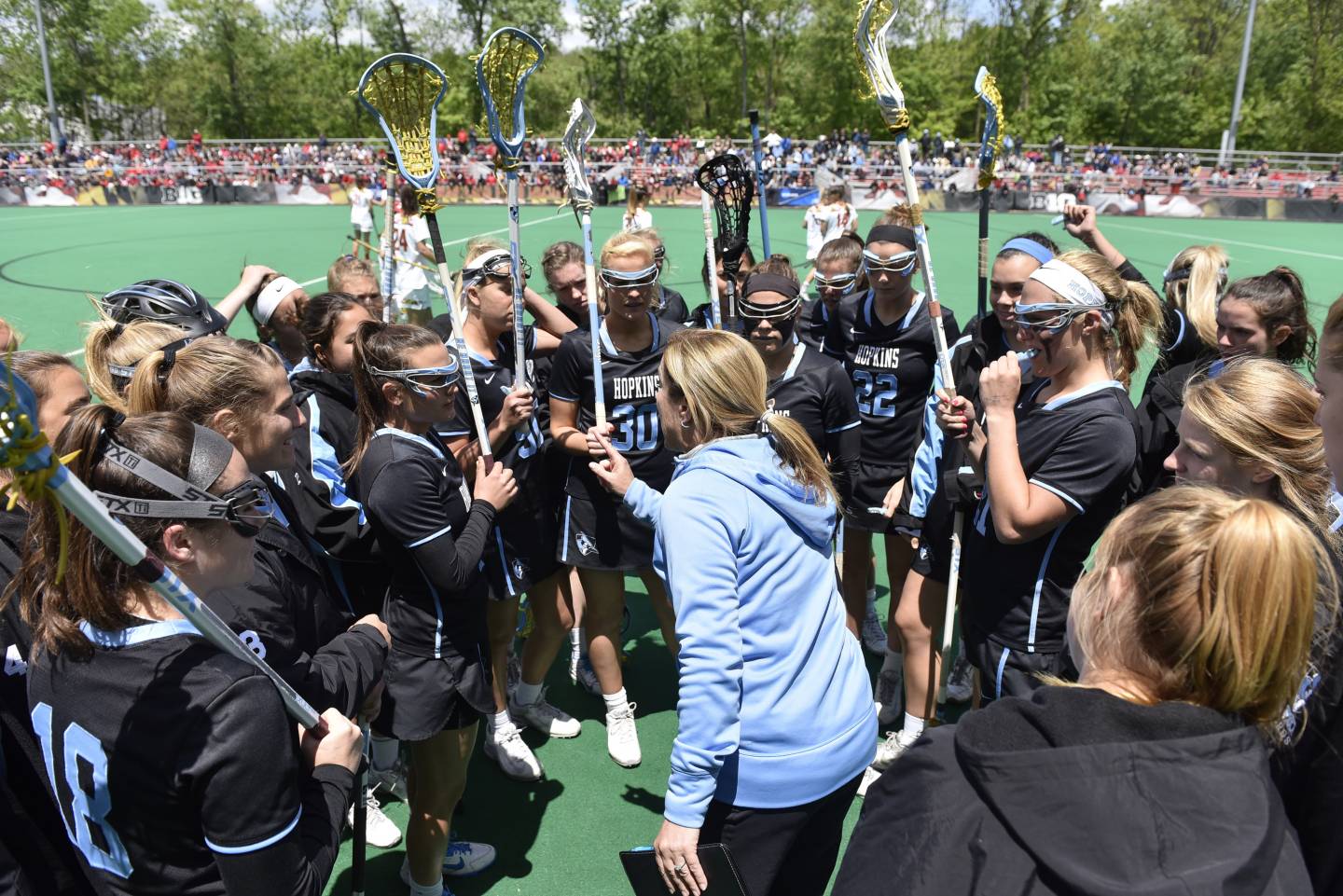 Image caption: Johns Hopkins women's lacrosse coach Janine Tucker has led the Blue Jays to 303 wins and nine NCAA Division I tournament appearances in her 28 seasons. Tucker announced Friday that she plans to retire after the 2022 season.

A five-time IWLCA Regional Coach of the Year (1994, 1995, 1996, 1997, 2014), Tucker guided the Blue Jays from a highly-successful run at the Division III level to Division I in 1999. It didn't take her long to guide Johns Hopkins to the national stage at the sport's highest level as the Blue Jays topped Penn, 18-12, to win the ECAC Championship in 2001, just the program's third Division I campaign.

Three years after that first title at the Division I level, Tucker led Johns Hopkins to its first Division I NCAA tournament appearance, and the Blue Jays would qualify for the tournament three times between 2004 and 2007. That four-year stretch was capped with a run to the 2007 NCAA quarterfinals.

At the Division III level, Tucker guided the Blue Jays to the brink of the NCAA championship game four times. In Tucker's debut season, Johns Hopkins finished with its best record to date, posting a 16-1 mark and advancing to the 1994 NCAA Division III semifinals. Tucker led the Blue Jays back to the semifinals in 1995 and 1997 and to the quarterfinals in 1998. In five years of play in the Centennial Conference, Hopkins posted a near-perfect 49-1 record, won four conference titles, and finished undefeated in conference play in each of its four championship seasons.

Tucker has two sons, Ryan and Devin. Ryan was a four-year standout on the Virginia men's lacrosse team and played five seasons for the Bayhawks of Major League Lacrosse. He currently teaches at Norfolk Academy and is the head coach of the boy's lacrosse team. Devin earned both his bachelor's and master's degrees from Johns Hopkins and works for ABinBev in St. Louis as a sourcing manager.

"Johns Hopkins will be the only collegiate team I ever coach, and I look forward to being a part of the exciting next chapter in the history of this program."
Janine Tucker
Hopkins women's lacrosse coach

"Johns Hopkins will be the only collegiate team I ever coach, and I look forward to being a part of the exciting next chapter in the history of this program," Tucker added. "I will enjoy attending not only women's lacrosse games here at Homewood, but also those of our many other highly-successful teams that are coached by some very close friends. At the same time, this will allow me to devote more time to my own family and do some of the other things I have truly enjoyed. While my time as a head coach is coming to an end, my association with and support of Johns Hopkins women's lacrosse and Johns Hopkins athletics certainly is not."

After a successful career as an All-American lacrosse player at Loyola, Tucker broke into the coaching ranks at her alma mater as an assistant. She helped coach the nationally-ranked Greyhounds for four seasons, and her success as an assistant for a prominent Division I program led her across town to Hopkins when the women's lacrosse position became available in 1993.

She is the director of Tucker Lacrosse, which helps her promote women's lacrosse through camps, clinics, and speaking engagements across the country. Tucker co-wrote her first book with Maryalice Yakuchik entitled The Baffled Parents' Guide To Coaching Girl's Lacrosse, which was published in 2003. She has since published five more books: Women's Lacrosse: A Guide for Advanced Players and Coaches (2008, 2014), Go To Drills: Developing the Complete Lacrosse Player (2009), Building the Modern Midfielder (2012), Building the Modern Attacker (2013) and Building the Modern Defender (2015).

A noted and highly sought-after public and motivational speaker, Tucker is also a member of the Positive Coaching Alliance National Board of Advisors as well as the Collegiate Officials Association and the US Lacrosse Long-Term Athlete Development Model Committee.

"I am very much looking forward to the coming year with my team, my staff, and my co-workers," Tucker said. "There has never been a day when I didn't truly love coming to work and I will treasure every minute of my 29th year at Johns Hopkins."