'A global leader of unparalleled determination and integrity,' she will be recognized during ceremony at SAIS on Thursday

Johns Hopkins University will award an honorary degree Thursday to German Chancellor Angela Merkel for her principled and courageous global leadership. The ceremony begins at 11:30 a.m. at the university's School of Advanced International Studies in Washington, D.C. 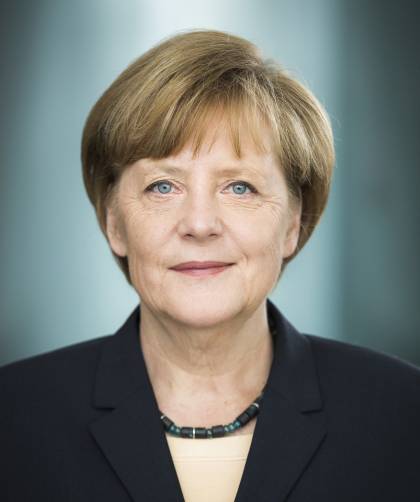 Merkel will be presented with a Doctor of Humane Letters, honoris causa, by JHU President Ron Daniels. Following the degree ceremony, Merkel will deliver remarks and answer questions submitted by Johns Hopkins students.

The event is closed to the general public but will be available via the Johns Hopkins livestream channel.

"A global leader of unparalleled determination and integrity, Chancellor Angela Merkel has not only led Germany but been a beacon for the world during crises from the Great Recession to the COVID-19 pandemic," Daniels said. "Bringing a scientist's rigor to policy and a deep humanity to politics, she has defended the values of open discourse, freedom of inquiry, and human flourishing that lie at the heart of democratic society and its institutions, including research universities like ours. In this, and in all she has accomplished on the world stage, Chancellor Merkel embodies the core ethos of Johns Hopkins, and we are truly honored and privileged to call her a part of the Johns Hopkins academic community."

Merkel has served as Germany's chancellor since 2005 and will conclude her fourth and final term later this year. She is the first woman to lead Germany since it became a modern nation-state in 1871 and is the first former citizen of the German Democratic Republic to lead the reunited country.

Merkel entered politics in 1990 when she joined the Christian Democratic Union (CDU) political party. She served as deputy chairwoman of the party from 1991 to 1998. During the same period, Merkel served in Chancellor Helmut Kohl's cabinet as minister for women and youth and minister for environment, nature conservation and nuclear safety.

Merkel was named secretary-general of the CDU following Kohl's defeat in the 1998 general election and began her 18-year tenure as chairwoman of the party two years later. From 2002 to 2005, she led the parliamentary group of the CDU and the Christian Social Union (CSU) in the German Bundestag. In 2005, Merkel was elected chancellor after the CDU/CSU and Social Democrats (SPD) agreed on a coalition deal.

As chancellor, Merkel is celebrated for her efforts to foster Germany's economic rebirth in the wake of the Great Recession in 2008, and she is widely recognized as the glue that has held the European Union together. Merkel is the longest-serving national leader in the EU and the senior G7 leader.

"For 16 years, Chancellor Merkel has been an outstanding leader shaping Europe, the trans-Atlantic bond, and international relations, and she has earned the highest honor that the university can bestow," said Jeff Rathke, president of the university's American Institute for Contemporary German Studies, which since 1983 has served as a leading think tank focused on pressing issues at stake for Germany and the U.S. "During a tenure spanning four U.S. presidents, the chancellor has ensured a strong and collaborative German contribution to addressing crucial issues—climate change, the COVID-19 pandemic, and promoting international stability—to name just a few."

Before entering politics, Merkel planned a career as a researcher. She earned a degree in physics from the University of Leipzig in 1978, then became one of a small cadre of female researchers at the Central Institute for Physical Chemistry at the Academy of Sciences in Berlin, where she served on the academic staff from 1978 to 1990 and earned her doctorate in quantum chemistry in 1986.

Her scientific background has informed her policies, including her environmental advocacy and her push for increased investment in basic science research to advance scientific breakthroughs. In recognition of her outstanding service to science while chancellor, Merkel last month became the first head of government to receive the Harnack Medal from the Max Planck Society. It is one of many honors that have been bestowed upon Merkel, including the Charlemagne Prize for her effort to unite Europe and the Presidential Medal of Freedom from President Obama in 2011.