A conversation with William Cho, president of the Johns Hopkins Class of 2021

When William Cho ran for senior class president, he had no idea he'd be shepherding the Class of 2021 through a school year unlike any other.

Now, as the senior class prepares to graduate, Cho has been working to help plan the university's first in-person Commencement ceremony since 2019 because of disruptions caused by the COVID-19 pandemic.

The Hub caught up with Cho to discuss the upcoming ceremony, the past year of student programming, and the challenges of bringing unity to a class still spread out around the world. 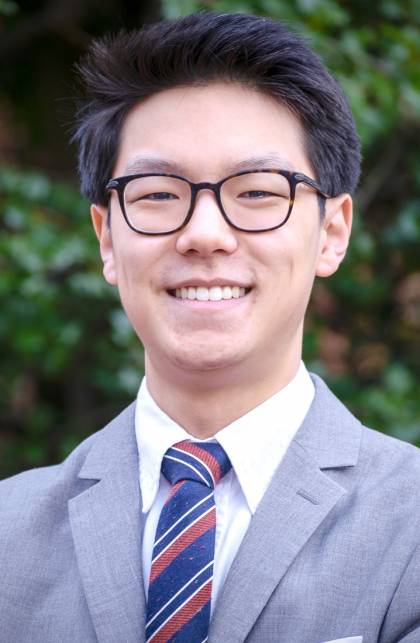 Image caption: William Cho, senior class president, will give pre-recorded remarks at the Class of 2021 Commencement ceremony, May 27

You ended up serving in what turned out to be a very unusual year. How would you say your role had to evolve due to the pandemic?

In terms of things that didn't change, I was still responsible for trying to promote class unity and using the budget we were allocated to help put together programming and engagements with the senior class.

One of the ways that it was different was that it was really difficult because we were expected to plan programming where we would have a virtual component and then an alternative in-person component, and trying to balance everyone's needs in that way.

You mentioned the idea of promoting class unity. Did that role take on an added importance this year?

I would say so, because people were really pushed into periods of isolation or isolating circumstances that no one would have normally foreseen or wanted, per se. It's already hard enough trying to bring together 1,350 students in normal circumstances. With everything being online, it was important to try to keep it all as inclusive as possible.

What has it been like planning for the university's first in-person Commencement since 2019?

We obviously don't have the power to exactly plan the explicit details of Commencement, but we have the opportunity to provide input and feedback to the planning staff. We really wanted to push for something that was in-person if completely feasible and safe with COVID. So we were super excited to really push for that before the announcement came out, and when it was decided that it could be in person we were really happy that our feedback was taken on that.

One of the caveats, as you may know, is that friends and family are not able to attend, which is obviously very unfortunate considering that we would never be here without all the support that we've come through so far. But at the end of the day, we decided to make this kind of hard decision where the planning staff told us that either we can have everything online and it's equal for everyone, or only the graduates can attend but families and friends can't. That was a difficult decision, but we decided that it would still be better that way, because we wanted to resume to normalcy as much as possible, and we knew that our friends and family would be supporting us no matter what. [Editor's note: Because of changing public health guidance, up to two guests per graduate will be permitted to attend the Commencement ceremony.]

Looking back at the past year, are there any achievements that you're particularly proud of?

I'm on the student advisory committee for the planning of the [Hopkins] Student Center. That's supposed to be finished by 2024 tentatively, and I've been voicing a lot of concerns with accessibility for students with disabilities.

I think it's really important in the spirit of inclusivity and fairness that I was voicing these concerns, and no parts of the student center should be inaccessible for anyone with a disability. Because anyone can get disabled at some point. You might break your leg, or it doesn't have to be a pre-existing condition or anything. So I think fighting for inclusivity in general for students and making the student center as comfortable an environment for everyone was something that I was particularly proud of in my time at SGA.

Do you have any parting remarks for the Class of 2021?

I just ask that everyone treats whoever they meet with kindness and tolerance. We're increasingly struggling with hatred or antagonism in the world. I've always felt that even if you do disagree with someone, it just proves better to act with kindness and understanding.