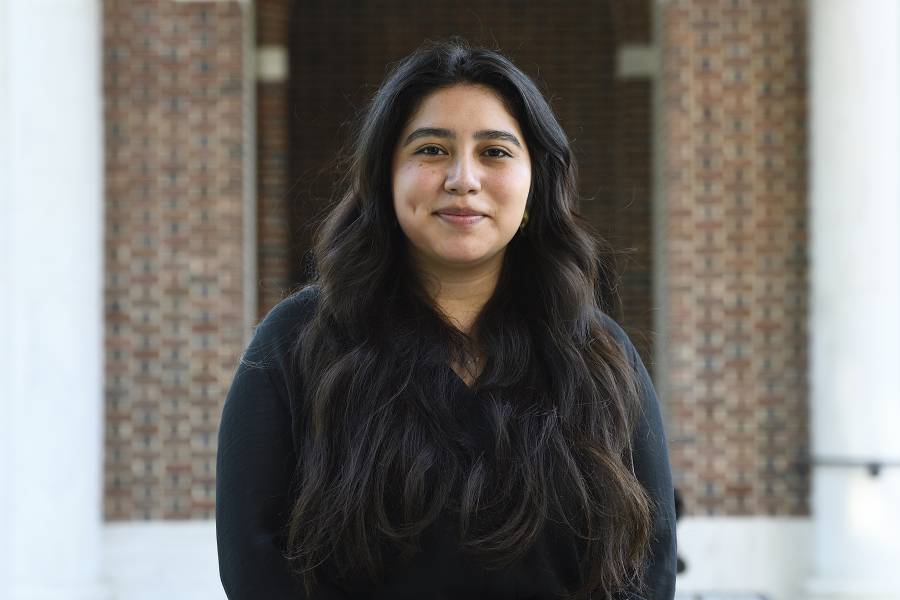 Warrior of the workplace

After her own brushes with warehouse accidents, senior Rubi Ramirez has set her sights on workplace safety and discovered a new calling along the way

Rubi Ramirez reached up and gently tapped a box in a 40-foot stack. In the recycling warehouse where she'd been working for a few months, workers often patted the stacks of boxes, which contained cardboard and plastic, to make sure they were light enough to knock over so they could continue with the task of breaking them down.

But this time, at the same moment she realized how heavy this box was, it came crashing to the floor. She managed to dodge it, and watched as an entire stove landed where she had been standing.

She brought the situation to her supervisor's attention. "But then nothing changed," Ramirez says.

It wasn't the first incident Ramirez, a Johns Hopkins senior, had experienced at the warehouse, and it wouldn't be the last.

When Ramirez took medical leave from Hopkins in the spring of 2015 after her first semester, she went home to Pomona, California, and found a job in the San Bernardino County warehouse where her mom worked. Safety was a top priority there; management even played a song every morning to make sure workers had their personal protective equipment and their stations were clean.

But soon enough, the company moved to Mexico in search of cheaper labor, and Ramirez found a new job. The difference was stark from the beginning; she was handed a vest and a razor knife and sent to the warehouse floor, where she resorted to asking a group of teenagers what she was supposed to do.

"I vaguely knew of OSHA's existence and that it made sure workplaces were safe," she says, referring to the federal Occupational Safety and Health Administration. "But once I started working there, I realized, how can you have both of these warehouses with completely different attitudes and climates? There were things that they should not be doing. How are both of these warehouses in similar standing in the eyes of OSHA?"

"Everybody spends a majority of their day at work, and if you have to spend it someplace where you might not come home the way you went in, that's unacceptable."
Rubi Ramirez

Ramirez started asking her co-workers—many of whom were Latino and some of whom were undocumented—how long the company had been leaving them unprepared and unprotected, and learned it had always been that way. And then her boss asked her to use a broken ladder to retrieve a box, and she refused.

The incident sparked something in Ramirez.

"From that moment on, I started to do a little bit more research and get really interested in this, because I just couldn't believe these things were happening. Everybody spends a majority of their day at work, and if you have to spend it someplace where you might not come home the way you went in, that's unacceptable."

Shortly after these observations, Ramirez was cleared to return to Hopkins, and just a few weeks later she was back in class. But the experience made her rethink her previous plans for medical school. She realized her passion lay in the area of worker safety, and she switched her biology major to public health studies.

Hoping to get involved in occupational health research, Ramirez soon found her way to Maria Bulzacchelli, who directs the undergraduate program in public health studies and whose research specialty is occupational injuries. Now, for her honors thesis, Ramirez is completing part of the project the two of them designed, which examines U.S. forklift fatalities between 2002 and 2018.

The country experiences about 100 fatalities a year, and about 95,000 injuries—stats that correspond with the practices Ramirez witnessed during her time in the second warehouse. "Forklift operators in that warehouse were essentially forced to not really operate their forklift safely because of the time constraints they were under," she says. "They physically would not be able to meet deadlines unless they started to cut corners."

Ramirez's research will update the data on forklift fatalities, and OSHA is now planning to update its forklift standards, which haven't changed in 50 years.

The most recent published forklift fatality study dates back to the 1990s, so Ramirez's research will update the data and put into 21st-century perspective an issue that disproportionately affects Latino and undocumented workers. Forklift technology is evolving rapidly, Ramirez says, and the warehouse landscape is changing. Some machines have new attachments that affect their balance, and some are even remotely operated, so current standards may not account for the ways the machines are used today. Meanwhile, the rise in online shopping means there are more warehouses and more people working in them. OSHA is now planning to update its forklift standards, which haven't changed in 50 years.

"I would like my research to just inform safety recommendations and help prevent forklift-related fatalities," Ramirez says.

The research, and the way Ramirez has approached it, go beyond typical undergraduate work, Bulzacchelli says. First, Bulzacchelli helped Ramirez narrow down a broad interest in Latino and temp workers in warehouses. Then, with minimal guidance, Ramirez jumped into the Bureau of Labor Statistics online database, mining it for relevant information. She scoured the internet for data on OSHA citations and enforcement. And she found online sources for information about the epidemiology of the vulnerable populations being injured, in what occupations, and in which industries—including age, race, and ethnicity—as a first step toward targeted interventions.

"We have that thing in common that not many people have, which is getting excited about occupational safety," Bulzacchelli says. "It really is more like working with a colleague."

Earlier this month, Ramirez presented her research at the Society for Advancement of Violence and Injury Research's national conference, hosted by Johns Hopkins this year. Spots giving oral presentations are competitive, and Ramirez was nervous making her professional debut, but she says it went better than she expected.

"I was talking about this project which I absolutely love and feel so passionate about with other people who share similar interests, and the conversation flowed so easily and the questions were amazing," she says.

The conference is likely to be the first of many, as Ramirez expects to continue her project after graduation, turning her focus toward the OSHA narratives associated with fatalities to identify patterns among the incidents. Until recently, her plans after that were to become a certified industrial hygienist to make a direct impact on workplace safety, but she's begun to shift her sights toward a master's degree or PhD so she can continue her research and broaden the scope of her impact.

"I need to keep doing this because I have so many questions," says Ramirez, who is the first in her family to attend college. "I know other people probably share some of my questions, but I just don't see the answers, and I think I might have to do it myself."