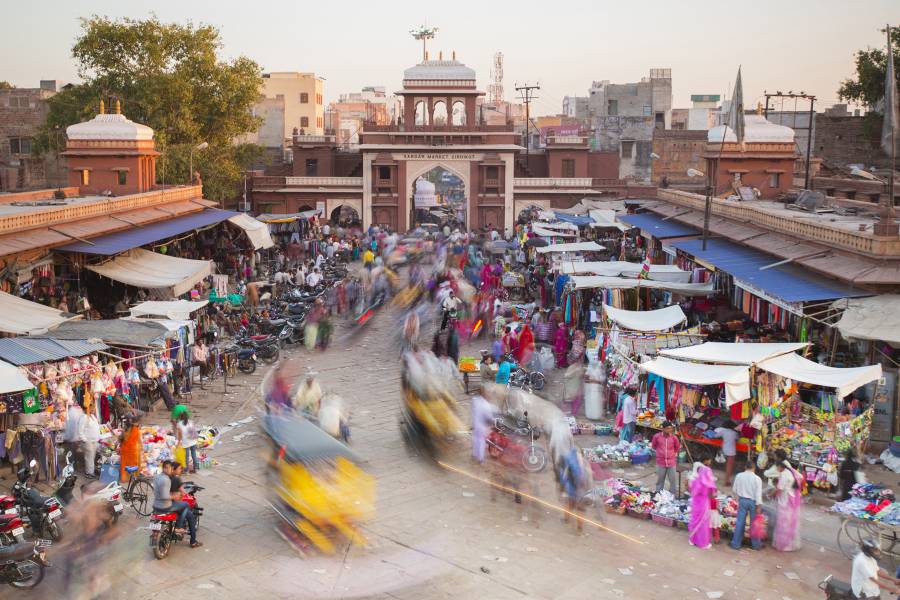 A bold new chapter begins for Hopkins and India

In 2004, Amita Gupta, then a Hopkins infectious diseases fellow, was conducting research in a crowded clinic in Pune, a sprawling city in western India roughly 90 miles south of Mumbai. A second-generation Indian American, Gupta spent many childhood vacations in various parts of the country, visiting with extended family. This time, though, she was focused on finding ways to surmount a huge challenge: the transmission, via breastfeeding, of HIV from mothers to their babies. Then, unexpectedly, another issue came to Gupta's attention.

"In the clinic," she recalls, "there were hundreds of pregnant women lined up to get their HIV tests, and I noticed many were coughing and wondered why." The cause, she discovered, was tuberculosis, a potentially deadly airborne disease prevalent in India, burdened by a quarter of the world's cases. Gupta and her team soon launched another study, focusing on TB and pregnancy, which, combined with their previous work, would address the spread of both HIV and TB.

Her efforts to better understand and prevent TB in pregnancy led to the first-of-its-kind global trial of the drug isoniazid, a study of which was eventually published in The New England of Journal of Medicine.

Gupta, now director of the JHU Center for Clinical Global Health Education, is one of hundreds of Hopkins-affiliated experts who've engaged in game-changing research and operations in India since the 1930s. Given this rich history, the university recently established the Johns Hopkins India Institute, or JHII, a multidisciplinary entity—housed under the Office of the Provost—that will leverage Hopkins' wealth of experience and expertise in India to expand education- and health-related impacts internationally.

"India's talent, scale, and reach are fueling progress across the globe at an unrivaled pace. We are proud to have supported India's achievements and, through the Johns Hopkins India Institute, envision an even greater future together," says Sunil Kumar, the university's provost and senior vice president for academic affairs.

While Hopkins researchers have been working with their counterparts in India for almost a century—resulting in the training of generations of health care and other professionals, as well as partnerships with India's government on multiple initiatives—they've done so under separate school banners. In coordinating efforts "the idea is that the whole is greater than the sum of its parts," says Gupta, who co-chairs the steering committee supervising the institute's creation along with David Peters, chair of the Department of International Health at the Bloomberg School of Public Health. "There's real strength in coming together and understanding the scope of Hopkins' schools' activities. We can share resources and unite around ideas, training, education, and research objectives specific to India." 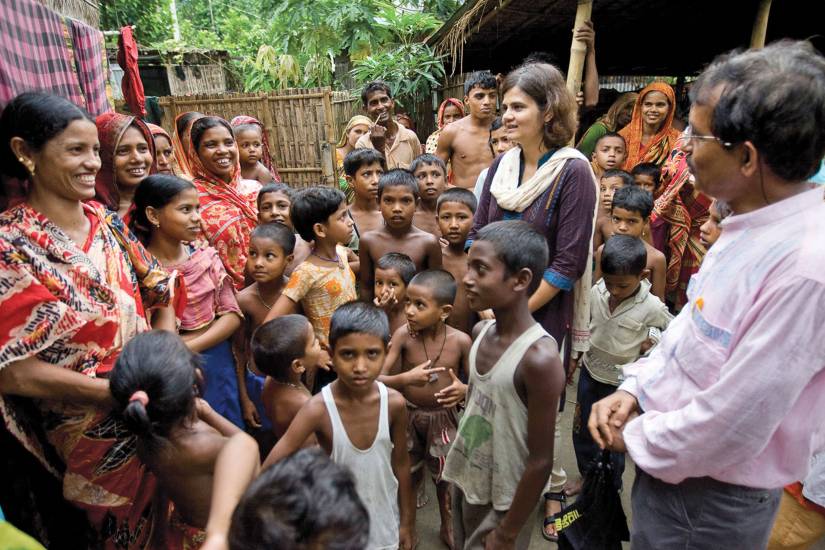 What initially drew Johns Hopkins and its affiliates to the country was the potential for large-scale impact. India, the second most populous country in the world, is home to more than 1.3 billion people. "It has diverse populations but also huge variability in terms of capabilities—in science and digital technology, for example—and needs," Peters says. India is home, for example, to escalating economic inequality between the haves and have-nots, reflected in part by a huge digital divide between urban and rural areas. It also leads the world in diabetes and TB prevalence and faces threats of air pollution, natural disasters, and a rise in noncommunicable diseases, including cardiovascular ones. "It's sort of a ground zero," says Peters, "and, for public health, that's an opportunity with global relevance."

The potential for widespread impact, combined with personal reasons, prompted the 10-year-old Ujala Foundation, founded by former Rohm and Haas CEO Raj Gupta and his wife, Kamla, to donate $1.15 million to the establishment of the JHII. Raj Gupta was born in India and moved to the United States in 1968 at age 22, and the Ujala Foundation has been a major supporter of the CCGHE's work for years. Gupta is also Amita's father and serves as chair of the institute's advisory board.

"I'm trying to be a resource to attract people to the board, both in India and the U.S., and help navigate the establishment process," he says. "We're not just writing a check but taking an active part in it."

Set to launch officially in September, the JHII will serve four primary purposes: raise awareness of Hopkins' work in India; promote interdisciplinary achievements to the broader population; build and sustain equal and innovative partnerships with counterparts in India; and expand research activity through local and institutional funding.

The institute will build on the momentum of grassroots fundraising and philanthropy in India. Over the past several years, donations to social causes by Indians, Indian Americans, and corporations have been on the rise. Prior to the formation of the India Institute, Hopkins founded Johns Hopkins India Private Limited and Johns Hopkins India Foundation to facilitate the expansion of work on the ground. The JHII will develop operating procedures and activities for these two new entities.

Already, Hopkins' involvement in India is considerable. More than 90 JHU faculty, representing all academic divisions, are currently working in India or on India-related projects, and the university has been awarded grants of more than $167 million in partnerships with more than 100 India-based organizations over the past five years. Affiliated with the JHII are two new Hopkins-founded operations: the Maternal Child Health Center in Kolkata and the Infectious Disease Research Center in Pune, for which Amita Gupta serves as director.

"Hopkins is very strong in maternal health, infectious diseases, public health, and medicine," she says, "but technology is where we can broaden our efforts. And India's a leader in AI and information technology. So we want to leverage that and work together on pressing global health challenges." 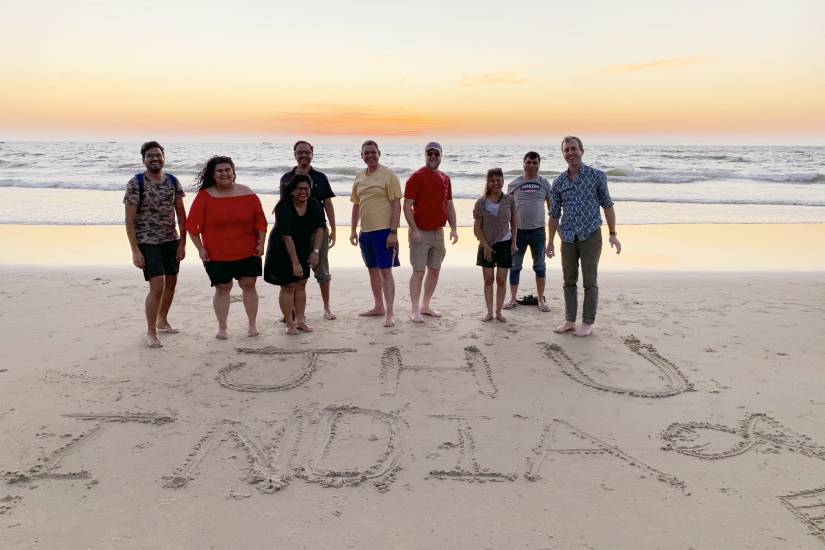 The partnership between Hopkins and India began in 1932, when the Rockefeller Foundation facilitated the founding of the All India Institute of Hygiene and Public Health in Kolkata. Over the next several decades, researchers at Hopkins and in India engaged in joint projects resulting in long-term benefits, among them:

Hopkins has also educated and trained thousands of Indian-born students and those of Indian descent, among them notable figures such as Sushila Nayar, who became India's health minister in 1952, and Indu Bhushan, who recently served as CEO of India's National Health Protection Scheme. Bhushan was the featured guest in a JHII-hosted Hopkins at Home seminar last October, when he discussed his supervision of the country's National Digital Health Mission, an ongoing effort to provide each of India's citizens with digital health identifiers and gather them in a unified system. The end goal is to improve personalized health care while studying and monitoring the country's many diseases. The latest of a series of online seminars, "The Impact of Indian Americans on U.S. Politics," covered the recent national election and featured several Hopkins experts in this area.

The webinars, Peters says, are a form of knowledge sharing about India-related issues that directly or tangentially involve Hopkins. As for what lies ahead for the JHII, a strategic plan focuses on multiple means of fundraising, as well as the establishment of additional medical centers, training facilities, and scholarship and exchange programs in India over the next two decades. "We're building this for long-term sustainability," Peters says. "It's not just a project. We want a permanent presence that is flexible and responsive."

A long-term investment is ideal for the Ujala Foundation. "Hopkins excels in so many fields, including medicine and business. They are the gold standard," Raj Gupta says. "And if we can think about Hopkins India in this domain, being the voice and the reference in 10 to 20 years, that says to me we've accomplished something."