Bruce Enzmann, Min Jae Kim, Shiker Nair, and Aaditya Rau are among a cohort of 410 Goldwater Scholars selected for 2021–22 from an estimated pool of more than 5,000 applicants 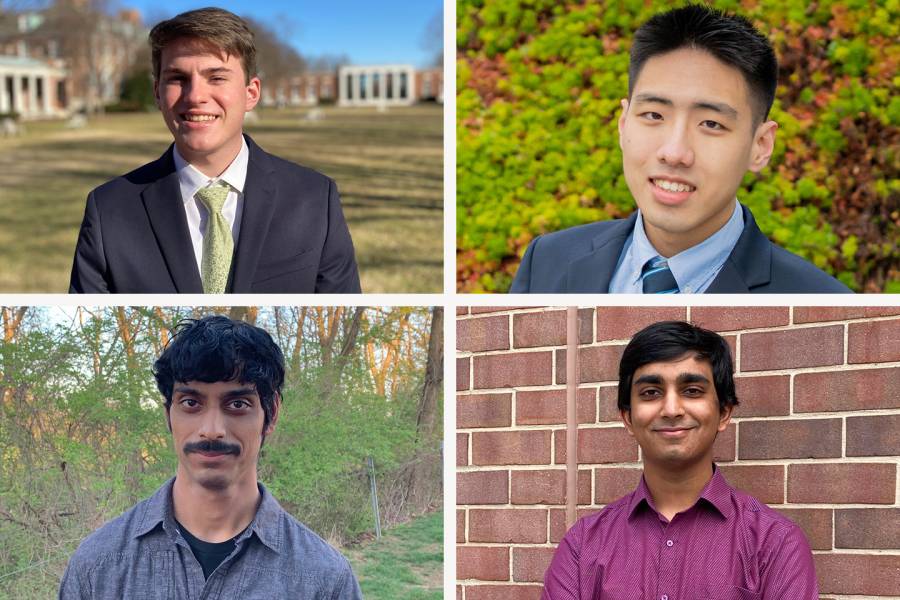 Four Johns Hopkins University students have been awarded Goldwater Scholarships for their research and achievements in the fields of science, technology, engineering, and math.

Juniors Bruce Enzmann, Min Jae Kim, Shiker Nair, and Aaditya Rau are among a cohort of 410 Goldwater Scholars selected for 2021–22 from an estimated pool of more than 5,000 applicants. Additionally, as part of JHU's Research Experience for Undergraduates program, faculty member Muyinatu Bell mentored Reese Dunne from Mississippi State University who also won a Goldwater Scholarship citing research conducted at JHU in his application.

Schools nominate up to four students from a pool of sophomores and juniors, selected for their research record and potential for leadership in STEM fields.

Bruce Enzmann, a junior materials science and engineering major, focuses on biomaterials design to enhance tissue regeneration for post-injury repair. Working in Hai-Quan Mao's group in the Institute for NanoBioTechnology, Enzmann has led the development of a nerve-wrapping device that prevents the formation of painful neuromas and decreases inflammation during recovery after peripheral nerve damage. He was awarded PURA and HOUR NOVA grants for this project. This summer, Enzmann made the most of a truncated, virtual NSF REU at the University of Pennsylvania to develop expertise in imaging analysis and data visualization in studying the interplay of cells and engineered hydrogels. He also recently worked on a project with the Mao group on the design of face mask filters to limit droplet transmission of SARS-CoV-2. Outside the lab, Enzmann is active in the JHU Materials Research Society and Society for Biomaterials.

Min Jae Kim, a junior biomedical engineering and neuroscience major, is driven to improve clinical tools for monitoring and treating Parkinson's disease and other neurodegenerative diseases. His most recent work, with Kelly Mills in the Department of Neurology at the School of Medicine, is focused on developing predictive models for deep brain stimulation, to help clinicians achieve greater accuracy in setting stimulation parameters. He has also worked with William S. Anderson in the JH Functional Neurosurgery Lab to develop more accurate tools for measuring motor symptoms in Parkinson's disease patients. Like Enzmann, Kim contributed to the scientific response to the pandemic: he led a team of engineering students seeking to minimize the leak of viral COVID-19 particles from CPAP masks, expanding safe access to noninvasive ventilator support, under the guidance of Noah Lechtzin in the School of Medicine's Department of Pulmonary Medicine. Kim devotes his spare time to educating the public about clinical research on movement disorders and, on campus, leading the Johns Hopkins Monarch Initiative.

Shiker Nair, a junior biomedical engineering major, strives to design computational tools to aid early diagnosis and personalized treatment of debilitating heart and lung diseases. As part of the CIRCUIT program at the Applied Physics Laboratory, he helped develop a computational pipeline for diagnosing and subtyping patients with chronic obstructive pulmonary disease solely from computed tomography scans. His team has recently filed a patent application for this computational tool. This past summer, Nair was employed by Merck Pharmaceuticals to develop an open-source algorithm for analyzing how cardiomyocyte stem cells respond to specific drugs. After 12 weeks, his new algorithm outperformed the $100,000 commercial system the company had evaluated for this same drug development task. When not in the lab or working with his BME design team, Nair stays busy volunteering with Thread and APL's SAT coaching program, and helping to run a youth mentoring program he co-founded in his hometown of King of Prussia, Pennsylvania. For fun, he makes his own rap music and beats to share with his SoundCloud community.

Aaditya Rau, a junior engineering mechanics and applied mathematics and statistics major, is working toward a career in advanced materials research in which he hopes to facilitate greater reliance on alternative energy sources. In Kevin Hemker's lab, Rau is working independently on a PURA-supported project to characterize novel nickel-molybdenum-tungsten alloys, which are of interest in the creation of devices for extreme conditions in industries such as energy exploration and generation, aviation, and automotive. He is also continuing research he began this summer with the Princeton Plasma Physics Lab on the interactions between boron and graphite and how they can be applied in the development of nuclear fusion devices. Beyond his research, Rau contributes on campus by playing violin with the Hopkins Concert Orchestra and participating in the Hopkins Undergraduate Society for Applied Mathematics. 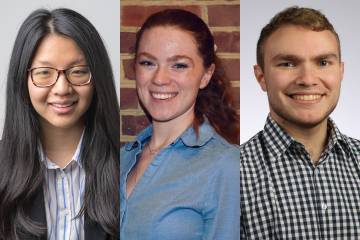 Published April 23, 2020
Annie Liang, Mickey Sloat, and Turner Woody are among 396 students selected for recognition based on research and achievement in STEM fields