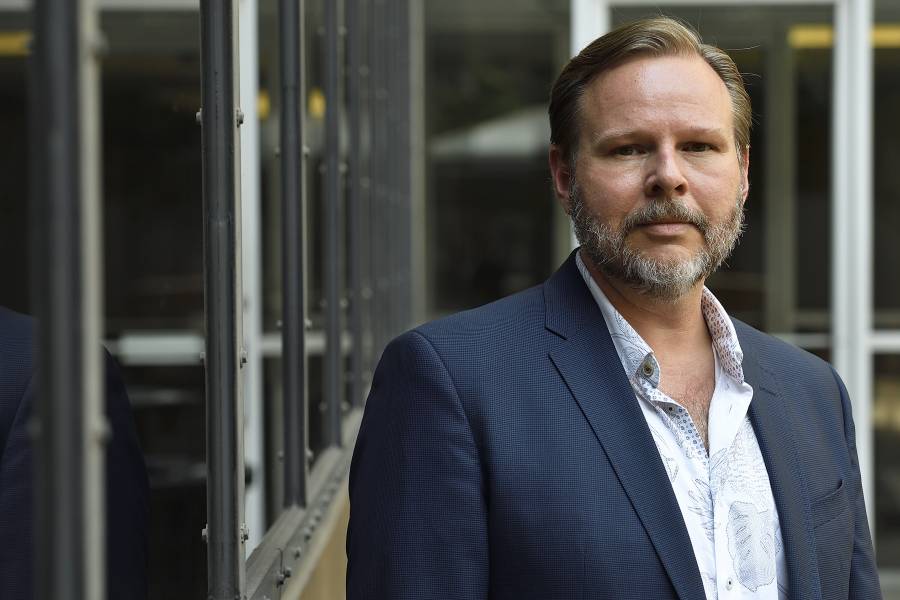 As a Bloomberg Distinguished Professor, he will hold appointments in the Krieger School of Arts and Sciences and the School of Medicine

It was during a research semester abroad in Stockholm, home of the Nobel Prize, that molecular biologist Jeff Coller discovered "scientist" was a viable career path for him, and it was a discovery that he calls magical.

Just a few years earlier, biologists Sidney Altman and Thomas Cech had won the Nobel Prize for their discovery that RNA—a building block of cellular function—can start or accelerate its own chemical processes, an ability that had only been considered possible for proteins. Coller happened to be studying a gene with this form of autocatalytic RNA, and from there it all clicked.

"I had learned that the only thing that could do catalysis [in a cell] was protein. But this guy, Tom Cech, told everybody that RNA can be catalytic, and he won the Nobel Prize for it. And that was just so cool," Coller says. "I was 21 years old, and my RNA research just never stopped. I've never really worked on anything else."

Coller, a groundbreaking genetics researcher whose work has led to fundamental shifts in the understanding of gene expression and to the creation of new therapeutics for treating genetic disorders such as Dravet syndrome, will join Johns Hopkins University as the Bloomberg Distinguished Professor of RNA biology and therapeutics. He will hold appointments in the Department of Molecular Biology and Genetics at the School of Medicine and in the Department of Biology at the Krieger School of Arts and Sciences.

"It's nice that you can still help people and make an impact even if you take a different path."
Jeff Coller
Bloomberg Distinguished Professor

Coller's work focuses on how RNA interacts with the ribosomes and how it degrades. In nearly all living organisms, DNA in the cell nucleus emits strands of RNA that tell the ribosomes what proteins to produce and in what quantity, allowing cells—and therefore the organism—to function. But as long as that RNA signal survives inside the cell, the ribosomes will continue to express the proteins it orders up. As a result, the timed and precise destruction of RNA is also an essential part of cellular function.

"Jeff's ambitious work in gene expression and in molecular and cell biology in general has had a transformative impact on the field and also on the work of other scientists," says John Toscano, professor of chemistry in the School of Arts and Sciences. He was previously vice dean for natural sciences. "Members of our Department of Biology are looking forward to working with him and to benefiting from his contributions to the laboratory as well as to the classroom."

Coller, who comes to Johns Hopkins from Case Western Reserve University, discovered that when it comes to messenger RNA, or mRNA, the information that dictates how long the signal survives is actually embedded in the sequence of the mRNA itself—like a genetic version of a message that self-destructs.

"Essentially, the ribosomes are the machinery that read the genetic code, and they do so at different rates," Coller says. "Those minute hesitations in reading the code are themselves interpreted by a complex of proteins that then respond and degrade the messenger RNA accordingly."

The discovery has led to more thorough understandings of the process of gene expression and the types of cellular messages that are important. For example, certain messages might degrade at slower rates, allowing the ribosomes to continue producing proteins that are needed in greater quantities. Other cellular messages might degrade immediately once the need is fulfilled. Coller likens it to the difference between reading a newspaper and rereading a novel.

"Jeff Coller has spent his career focused on cellular RNA and the mechanisms by which its stability is regulated," says Paul B. Rothman, dean of the medical faculty and CEO of Johns Hopkins Medicine. "His work has consistently broken new ground, and it also has clinical potential for a range of diseases. We are very excited that a scientist of this caliber is joining us in Baltimore."

He's spun out his findings into a number of side projects and new avenues for research, including one project that examines transfer RNA, or tRNA. That tRNA research has also led Coller to venture into therapeutic applications of his research. His science and research are the basis of the biotech startup Tevard Biosciences, which is developing RNA therapeutics that can mitigate the effects of Dravet syndrome, a genetic form of childhood epilepsy that is linked to severe seizures, developmental delays, and shorter life spans. It is a haploinsufficiency disease, meaning it is caused by genetic mutations that prevent cells from expressing an adequate number of proteins. In a majority of cases of Dravet, a stop code mutation in the SCN1A gene causes the ribosomes to pause reading RNA, prematurely stopping the production of necessary proteins.

The team hopes to design a virus that can deliver specially engineered tRNA strands to the central nervous system that integrates with the patient's DNA and supplements the shortage of proteins caused by the stop code. The group is also exploring ways of applying their work to treat muscular dystrophy.

The co-founders of Tevard Biosciences are both fathers of children with Dravet syndrome. As a parent himself, Coller says the work hits close to home.

"The therapeutic aspect is a very humbling experience," Coller says. "It's a different way of doing the science, but what keeps us grounded is the fact that we're working with parents of children with a debilitating disorder."

The work also brings Coller a sense of irony. As an undergrad majoring in biology and chemistry at the University of Michigan, he wasn't sure of his career goals. After his time in Stockholm, he chose the path of a research scientist over that of a physician—only to find himself back in the world of medicine.

"It's come full circle," he says. "It's nice that you can still help people and make an impact even if you take a different path. I guess my path takes a lot longer—25 years longer—but nonetheless, the ends are still the same."

With his appointment at Johns Hopkins, he's also hoping to fulfill a longtime goal for his teaching. After receiving his PhD in cell and molecular biology at the University of Wisconsin and completing his postdoctoral training at the University of Arizona, Coller joined the faculty at Case Western Reserve University in 2005, where he mostly taught graduate students and medical students. He says he's looking forward to teaching more undergraduates, who are more likely to be on the brink of the kind of career exploration that he had found so transformative.

"It's a time when you're really impressionable and a teacher can make a big difference in whether or not a student goes one path or another," Coller says. "When you're in grad school, you've already made that choice."

He continues: "It was really through my experiences as an undergrad that solidified that I could be a scientist—that I could make a career out of being excited about my daily life and work. And I think that is a magical moment."

"Jeff Coller is an exceptionally accomplished molecular biologist who will be a major collaborator with other researchers at Johns Hopkins," says JHU Provost Sunil Kumar. "We are excited to welcome him to Baltimore and look forward to him exploring new directions at Hopkins as a Bloomberg Distinguished Professor."