Meet the newest grantees of the Bisciotti Foundation Translational Fund

Four Johns Hopkins professors have received grants for their research through the Bisciotti Foundation Translational Fund.

Established with a generous multiyear gift from the Stephen and Renee Bisciotti Foundation, the fund provides $300,000 annually in seed money to advance Johns Hopkins discoveries on a commercial path. Recipients are awarded from $25,000 and $100,000 to conduct their work during a period of up to nine months.

For this year's funding round, 26 applications were submitted. Six finalists presented their work in late January to an outside panel of researchers, other scientists, and investors.

Each applicant has made a report of invention to Johns Hopkins Technology Ventures. 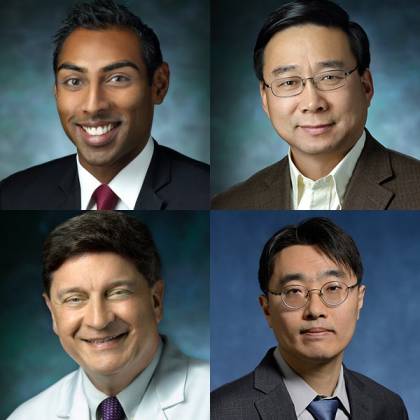 "This was a unique year with four recipients," says Brian Stansky, senior director of FastForward, JHTV's startup program. "Thanks to the generosity of the Bisciotti Foundation, the investment committee was able to provide funding in leading edge areas such as gene therapy, optical histology, advanced surgical procedures, and neurosurgery. We look forward to working with the faculty members on both their funded projects and longer-term commercialization efforts."

Applications for another translational fund, the Louis B. Thalheimer Fund for Translational Research, are due April 1.

The following researchers and their projects received the Bisciotti Foundation Translational Fund grants.

The pitch: A new gene delivery technology for liver diseases

Wilson's disease is a rare disorder that causes copper to accumulate in the body, which can lead to cirrhosis and liver cancer if left untreated. Patients need chronic care to manage symptoms, including multiple daily doses of copper chelators, which remove the heavy metal from the body. These treatments cost up to $300,000 annually. Current gene therapy treatments in clinical trials are based on viral vectors, but they can't be re-dosed and are complicated and expensive to manufacture.

Kumbhari and his colleague, Robert Kruse, have developed a gene therapy treatment for liver diseases based on hydrodynamic injection through the biliary system during a clinically routine, 30-minute endoscopic procedure. Successful delivery of several therapeutic genes has been achieved through testing focused on pigs because their livers are similar in size to humans'. The team plans to use the funding to refine its technology and eventually advance to human clinical trials.

The technology is available for licensing through JHTV, which also is pursuing patent protection. Kumbhari and Kruse plan to launch a startup for the technology.

Principal investigator: Xingde Li, professor of biomedical engineering with joint appointments in the Johns Hopkins Kimmel Cancer Center and the Department of Electrical and Computer Engineering

The pitch: A flexible and ultra-compact imaging system to view living biological tissues at histology resolution

Li and his colleagues have created a compact, flexible, lightweight, and portable MPF imaging system that can be placed atop rodents for functional brain imaging and can be used to perform "optical histology," meaning tissue does not need to be removed from the body for analysis. The researchers have developed and customized the system so that the imaging quality is comparable to that of a benchtop multiphoton microscope, but at a fraction of the cost.

Li and co-principal investigator Hyeon-cheol Park have developed a prototype and will use the Bisciotti funding to prepare for commercialization, including standardizing the engineering protocol, refining the technology and testing for safety. Johns Hopkins Technology Ventures obtained patent protection for the technology, which also is available for licensing. Li plans to launch a startup company and has already attracted industry interest.

The pitch: A medical device that simplifies a complicated vascular procedure

Microvascular and vascular anastomosis are highly specialized surgical techniques of hand-sewing together blood vessels during plastic and reconstructive surgery along with many other surgical procedures. While common procedures, they require years of training and practice, and hours to complete in the operating room. Kang, working with a team of vascular and plastic surgeons, used 3D printing to prototype Vaso-Lock, which holds together free vascular ends instead of requiring stitches. The device is made from materials approved by the Food and Drug Administration, and it is biocompatible.

By simplifying a complex surgical technique, the inventors hope to reduce operating time while allowing more vessel coupling during the procedure. The researchers also want to improve patient outcomes and safety, and make microvascular and vascular anastomosis more globally available.

JHTV is pursuing patent protection for the technology. The inventors, who last year were grantees of the Cohen Translational Engineering Fund, plan to form a startup to commercialize the innovation. The Vaso-Lock team also participated in the I-Corps program, during which they interviewed 40 surgeons, specialized operating room staff members, and industry workers to identify anastomosis challenges and help refine their business plan.

The pitch: A safer and easier way to operate on brain tumors

Surgical excision is the gold standard for treating tumors and blood clots deep in the brain. But retraction—holding apart brain tissue to enable access to a tumor—can cause brain bleeding, swelling, or bruising, leading to loss of motor control, vision, and speech. The size of most retractions is set prior to surgery, meaning doctors cannot adjust during the procedure.

Cohen developed Radiex, which uses an expanding "smart balloon" at the tip of a thin, rigid catheter to retract brain tissue. The shunt-sized device makes a minimally invasive insertion into the brain to reach the tumor, at which point the balloon can expand as needed to push the brain away from the operating area. Tests on simulated brain hydrogels and pig cadavers showed Radiex causes at least 40% less pressure on the brain compared to established retractors.

Students from Johns Hopkins Biomedical Engineering, led by Sun Jay Yoo and under the direction of Amir Manbachi, have assisted Cohen's work on Radiex. Yoo has become the CEO of CortiTech, which licensed the technology, and Cohen is clinical lead on the company's advisory board. The company plans to use the funding for technology validation and clinical partnership establishment as it moves toward commercialization. JHTV is pursuing patent protection for the technology.