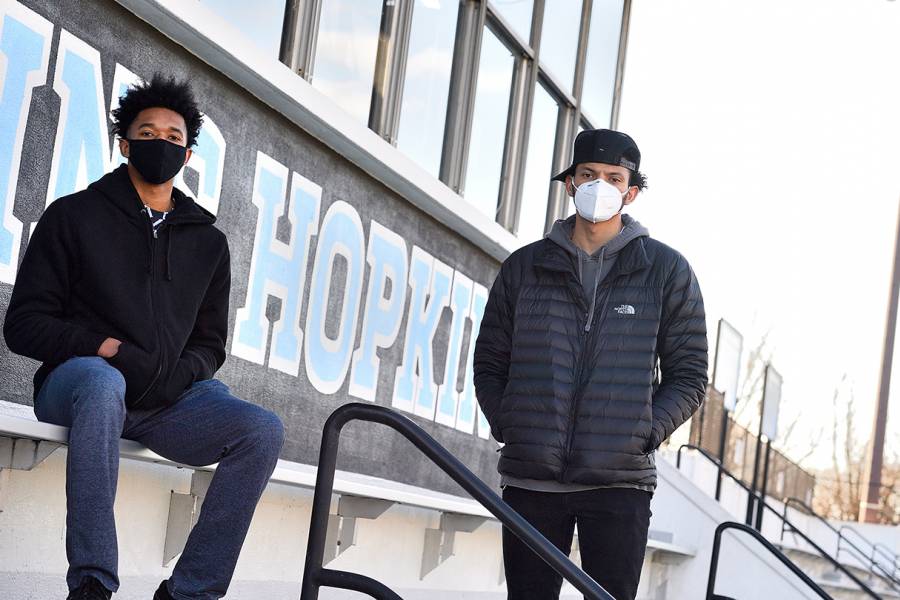 A turning point and opportunity

Growing up in Baltimore, junior Diego Thompson regarded basketball as more than a game. It was where he learned his values from teammates and coaches. It was a place where he could be comfortable with who he was and express himself.

Today, Thompson and the fellow members of the Black Student Athlete Association hope to use athletics to carve out a similar space for Black students at Johns Hopkins, creating a community bonded by identity and interests to support each other and make a positive impact on the world.

This summer, in the wake of national protests of the killing of George Floyd, Breonna Taylor, Ahmaud Arbery, and of racist police practices and abuse, the Johns Hopkins Athletics Department held a meeting where Black student athletes were invited to share their thoughts and feelings about these national conversations and the impact of structural racism on their lives. During the meeting, the athletes spoke about what was happening across the country, but soon the conversation turned closer to home.

"As we talked, we discussed instances where we felt we had been profiled, or felt that our experiences were not really shared by our teammates right here at Hopkins," said Ethan Bartlett, a junior public health major and member of Johns Hopkins basketball and track and field teams. He said hearing his teammates' perspectives made him realize the need for athletes to come together. "These experiences made them feel isolated or that they were kind of alone. It was in that moment, we saw a need to create a community."

Now, the students who attended the meeting are laying the groundwork to ensure the community they create will be here for generations of Black Blue Jays to come.

The Black Student Athlete Association, founded in June, is a combination volunteer organization, social network, and on-campus program. Open to all Black student athletes at Hopkins, the group was founded in an effort to amplify their voices in the Johns Hopkins community and provide a safe and supportive space for Black students to share their experiences and connect with fellow athletes, according to co-president Elise Moore.

"We realized that like this was a great turning point and a great opportunity to take the momentum of social justice that people expressed interest in over the summer and kind of try to build something sustainable for when that kind of faded," Moore said.

Thompson said he hopes the Black Student Athlete Association can become a family away from home for Hopkins' Black athletes.

"We want to be able to be our genuine selves without having to do things like code switch or any of the other common defense mechanisms we use in general Hopkins spaces and white spaces because we want people to receive us better and not think of us simply as our race," Thompson said. "That's the general idea, just a place where you can be accepted for who you are."

For Bartlett, who serves as the association's co-chair of community outreach, it was important that this group isn't a temporary show of solidarity, but a new, permanent resource for Black students at Johns Hopkins—that it become a network, a support group, and an advocate in the university community going forward.

"We want to establish a structure of permanence," Bartlett said. "Not only do we want to create a community for Black student athletes where you empower them and lift up their voices, we want to be alumni down the road that can provide guidance and be a community they can look up to."

Due to limits imposed by the COVID-19 pandemic, Bartlett said the association hasn't had the opportunities to be as active at Hopkins and in the community at large as they would like. Despite the setbacks, the group still works to make their voice heard.

They've met with Hopkins administrators, including with university President Ronald J. Daniels, and the newly-formed Hopkins Athletics Diversity, Equity, and Inclusion team, to discuss their future plans for the association. According to Moore, one of the earliest topics they brought to the table is revising the current hate speech policy in the student handbook to specifically list race as one of the protected categories.

In the past year, they've hosted digital conversations on housing and homelessness, policing, and racism and prisons. Most recently they co-hosted, with the Black Student Union and the Student Grant Program of the SNF Agora Institute at Johns Hopkins, a seminar with Baltimore Mayor Brandon Scott, activist Bilphena Yahwon, and the Reverend Kobi Little.

"We want to be able to be our genuine selves without having to do things like code switch or any of the other common defense mechanisms we use in general Hopkins spaces and white spaces because we want people to receive us better and not think of us simply as our race."
Diego Thompson
Community outreach executive chair

According to Bartlett, less than 40 of the more than 700 Johns Hopkins student athletes are Black. Diego Thompson, the co-chair of community outreach, said these kinds of groups are vital to creating a sense of community.

"You don't really have a larger representation on campus as a Black student. There's not necessarily a group to identify with outside of the Black Student Union, which does great work, but is very vast," Thompson said. "I think this group is able to help students connect on an individual level with people who share similar interests and experiences."

In addition to providing support for current students, Bartlett said he is interested in creating a force for meaningful community engagement with Baltimore. Soon, he said, they hope to start creating partnerships with Baltimore schools so that student athletes can be academic and successful role models for students in the community.

"People have these preconceived notions about Baltimore and use that to spread word to other people without having any lived experience to back it up," Bartlett said. "This is not only a good city, but there are great people here, and that's not just limited to the Inner Harbor and Fed Hill. We should be trying to make connections to all of these communities and get engaged with people."

Bartlett hopes to get Hopkins alumni involved with the association, and dreams of one day being a returning alum who can provide guidance to the next generation of Black Hopkins students.

"I think right now our voices are amplified because of the political moment we're in," Thompson said. "But I don't want it to be that way. I want our voices to be amplified for the next five years, and then five years after that and forever because that's the way it's supposed to be. It shouldn't have taken us this long to be given the floor to speak, but now that we have it, we want to hold onto it for as long as possible."