From a young age, Johns Hopkins senior Nihaal Rahman has dedicated time and resources to service. In high school, he volunteered at community food banks and meal delivery services, and as an undergraduate researcher at the university's Center for a Livable Future, he explores the intersections of environmental sustainability and public health.

Now, Rahman will carry forth this dedication to service and research internationally as a winner of the highly competitive Luce Scholarship, which provides training and professional placement in Northeast, Southeast, and South Asia. The Henry Luce Foundation aims to give Americans who have "great leadership potential, but little previous exposure to Asia" the opportunity to "develop a sophisticated understanding of a dynamic region that is critical to America's future and gain a new perspective of the world and America." 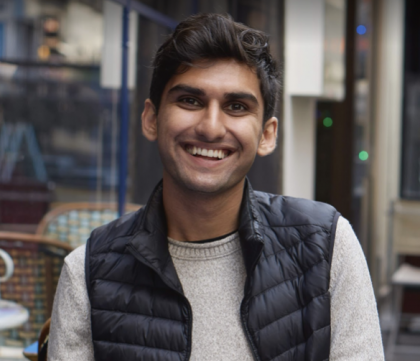 Rahman, an aspiring academic pediatrician with a double major in public health studies and environmental science, plans to use his Luce Scholarship to develop sustainable solutions to malnutrition among children in Southeast Asia.

"I think it's becoming more and more clear that sustainability and public health are just two sides of the same coin," writes Rahman. "The actions that are best for the environment are also best for humans in the long-term, and vice versa. That's why I've loved studying both of these fields, because there is a lot of overlap, and it's been interesting to see that interplay between the two fields."

After transferring to Hopkins from the University of Virginia at the start of his sophomore year, Rahman made a lasting impression on the university's service community while contributing to research on subjects including childhood health and sustainability. Notably, at the Johns Hopkins Center for Social Concern, he reinstated "Alternative Breaks," week-long immersion programs that pair JHU students with service opportunities and offer educational sessions of service and social justice issues.

Among other things, Rahman says that his work with the CSC taught him the importance of working with communities rather than imposing programs or projects in areas in need. "This notion was central to my work when reinstating the alternative spring break program, because I wanted to make sure that we weren't just sending a group of Hopkins students to a new city without any prior knowledge," Rahman says. "When I was connecting with partner organizations around the country, I made sure that we would only be supporting existing projects in those communities, instead of going into a new city and trying to forcefully start a project that was unnecessary and impossible to finish in a week's worth of time."

"I think it's becoming more and more clear that sustainability and public health are just two sides of the same coin. The actions that are best for the environment are also best for humans in the long-term, and vice versa."
Nihaal Rahman
JHU senior

The highly competitive Luce Scholarship is a 12-month program awarded annually to 15-18 seniors and recent graduates that recognizes individuals with an outstanding capacity for leadership, a record of high achievement, and mature, clearly defined career interests with evidence of potential for professional accomplishments.

While awaiting his precise placement through the program, Rahman looks forward to carrying the lessons he has learned from a lifetime of service with him during his Luce year and beyond.

"Lessons like these will definitely help me acclimate to the new communities in my host country, and I hope to continually learn from these communities I am entering," Rahman says. "The ability to practice cultural competency will be very crucial for a future career in public health and medicine, because I want to make sure any work I do is best for those populations I am trying to help."

JHU students and graduates can find more information on the Luce Scholarship application process on the website of the university's National Fellowships Program. 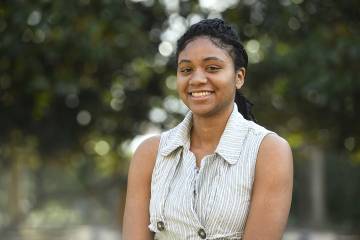 Published March 10, 2020
Maya Foster is a scientist, an activist, a dancer, musician, and designer. But through it all, one thing remains constant: she's determined to make an impact.