In their remarks, each reflects on the words and insights of the civil rights icon and discusses how his words can help lead to a better future for all Americans

Now is a moment for Americans to come together to heal the traumas of the past and work toward a more hopeful future—and to hold fast to the ideals of civil rights leader Martin Luther King Jr., said Donna Brazile, a political strategist and analyst, during a keynote fireside chat today held as part of the 39th annual Martin Luther King Jr. Commemoration at Johns Hopkins.

Brazile, who twice served as acting chair of the Democratic National Committee, started her career in politics as an intern on Capitol Hill, where she helped collect signatures for a petition to designate a national holiday in King's honor. She said she often reflects on the words and insights of King and older generations while discussing the political and social landscape of the United States.

"Being on TV live during those moments—whether it's the George Floyd protests or the count of the Electoral College—I often think about the wisdom of my grandparents, who taught us as children that we had to have faith," Brazile said. "It's the same faith that Dr. King believed. Faith when you cannot see the entire staircase but you have to take a step. And now it's important that this country take a step forward."

During remarks that officially opened the commemoration Monday, Johns Hopkins University President Ronald J. Daniels reflected on the words of a sermon King delivered in 1959, when he advised his congregation to maintain "infinite hope" for a better future in the face of violence and political losses.

"Amid a year marked by both bitter disappointments and courageous determination, we hold fast to the infinite hope that, through diligent and continued work, we too can move our society closer to greater equity and justice."
Ronald J. Daniels
Johns Hopkins University President

"Amid a year marked by both bitter disappointments and courageous determination, we hold fast to the infinite hope that, through diligent and continued work, we too can move our society closer to greater equity and justice," Daniels said.

Paul Rothman, CEO of Johns Hopkins Medicine and dean of the School of Medicine, discussed the importance of community, health, and racial equality during his address Tuesday. All three, he explained, are central to resolving public health crises such as the ongoing coronavirus pandemic and social ills such as racism.

"As we move forward, we must keep hold of the idea of community, and also remember that we have a solemn responsibility to others in our families, in our communities, and in our nation," he said. "All of us are truly bound together, every day, more tightly than we sometimes realize." 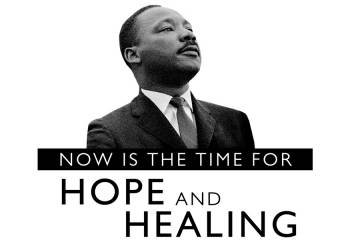 Brazile echoed those same sentiments during her talk. As chair of Washington Mayor Muriel Bowser's coronavirus task force, Brazile helped marshal district resources to deploy mobile COVID-19 testing sites for city residents, helped ensure the district's schoolchildren had equal access to the tools they'd need for remote instruction, and worked to protect Washington's homeless population, to whom the coronavirus poses a specific risk. Her mission, she explained, was that marginalized communities and communities of color would not be left behind when closures and stay-at-home orders were put in place.

The pandemic has laid bare the persistence of racism in U.S. health care, housing, education, and labor, she said. The only way forward is to come together as a nation and for American political figures to cooperate across the aisle.

"Democracy is an idea," Brazile said. "As long as we believe that it is we the people—not we the individual politicians, but we the people that govern this nation—we can move forward. We can find common ground."

Brazile's talk will be followed by a 6 p.m. screening of a pre-recorded interview between Oprah Winfrey and Barack Obama as they discuss Obama's memoir A Promised Land. Friday's events include an awards ceremony recognizing the recipients of the Martin Luther King Jr. Community Service Awards and the Levi Watkins Ideals Awards, and a virtual screening and live discussion of King in the Wilderness. 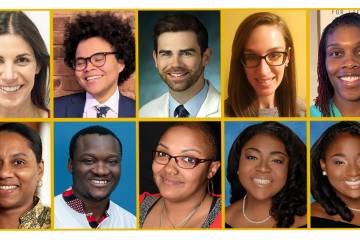