The project will pioneer new methods of instruction, research, and archival preservation that bring the history of the Black Baltimoreans to the fore

The Andrew W. Mellon Foundation on Wednesday awarded a $4.4 million grant to a team of scholars at Johns Hopkins University that is investigating the history of academic racism in higher education and building a citywide network to preserve Baltimore's Black history, culture, and arts.

The project, Inheritance Baltimore: Humanities and Arts Education for Black Liberation, will pioneer methods of instruction, research, preservation, and doctoral education that works with Black institutions to bring the experiences of Baltimore's Black community to the fore and combat institutional racism. The project will also document and preserve the ways Black people attained knowledge within and outside of academic disciplines.

The project is a collaboration between the Program in Racism, Immigration and Citizenship; the Billie Holiday Project for Liberation Arts, which is affiliated with the Center for Africana Studies; and the Sheridan Libraries and University Museums. Inheritance Baltimore will focus on three goals: 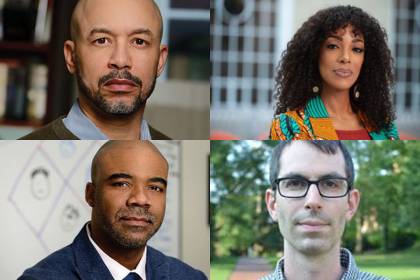 Inheritance Baltimore aims to elevate the role of the humanities in the continued revitalization of Baltimore and to advance research and record-keeping in support of reparations. "We want to cultivate the historical legacy of Black people in the city and in this region where so many African American archives are either incomplete or are being actively discarded," said Lawrence Jackson, a Bloomberg Distinguished Professor of English and history. "The university actually has a responsibility to direct resources toward the historical preservation of the complex features of Black life in the city of Baltimore."

Jackson founded and co-directs the Billie Holiday Project for Liberation Arts with Kali-Ahset Amen, an assistant research professor of sociology. The project will use the Mellon funding to host researchers, artists, archivists, and local elders for public engagement events with community groups—especially with Black churches that have been the vital repository for critical records. The project includes seminars conveying practices for securing and digitizing the works of arts, history, and literature in their possession.

"Our work has already begun with Black churches, which have been the keepers of history for so long," said Amen, the project's principal investigator. "We want their needs to drive this effort."

On- and off-campus workshops will bring together university affiliates and local keepers of Black public history. These sessions will help preserve oral histories and personal documents of longtime residents, ensuring the durability of a history that conventional research rarely seeks or obtains. These efforts include the establishment of Living History Fellowships, a residency program featuring local elders who will mentor students and deliver talks and discussions at Johns Hopkins and historically black colleges and universities in the Baltimore region.

Archiving efforts will include a portable digitization lab that can be transported to participating community groups. Gabrielle Dean, a special collections curator for the Africana Archives, and Joseph Plaster, a public humanities specialist for the Sheridan Libraries and University Museums, will lead Inheritance Baltimore's library research and preservation team. "We aim to train a local cadre of archivists and curators, comprising students and Black residents of the city, to bolster African American presence in the field as they assemble the materials to write a more complete account of Baltimore's past through an archival research consortium," Plaster said.

"We want to cultivate the historical legacy of Black people in the city and in this region where so many African American archives are either incomplete or are being actively discarded."
Lawrence Jackson
Bloomberg Distinguished Professor of English and history

The Mellon Foundation grant was awarded as part of its $72 million Just Futures Initiative, which seeks to improve equitable access to higher education, champions efforts to improve diversity among professors, and supports new research methods to chronicle untold histories of the nation's racist past.

"Johns Hopkins University is honored to be part of the Mellon Foundation's innovative Just Futures Initiative for the arts and humanities and to receive this generous grant in support of our faculty as they seek to forge new partnerships with our neighbors in Baltimore and to deepen our understanding of our history," Daniels said. "Under the leadership of Dr. Kali-Ahset Amen, Dr. Nathan Connolly, and Dr. Larry Jackson, the interdisciplinary Inheritance Baltimore project provides another important opportunity and framework to research and address the racism that continues to plague our institutions, our communities, and our nation."

The Program in Racism, Immigration, and Citizenship anchors Inheritance Baltimore's reparations efforts in academic departments and doctoral education. Under RIC's leaders, Nathan Connolly and Stuart Schrader, the project supports doctoral and faculty research on the racial history of the disciplines. It explores how academic inquiry has long been shaped by the exclusion and marginalization of Black knowledge and expertise.

Connolly, an associate professor of history, said the Mellon initiative arrives at a time when scholars across the university were looking in 2020 to "rise to the national moment," to respond creatively to the largest direct-action protests against institutional racism in American history. "Over the last century, Johns Hopkins University, like most elite U.S. institutions, rarely stood openly against segregation and racism, especially racism within its academic units," Connolly said. Black people, as a result, were forced to educate themselves in research and narrative methods that often "ran parallel to and separate from what was going on in the Ivory Tower," he said. Independent educational initiatives like the Freedom School movement of the 1960's Civil Rights era represent ongoing legacies of this history.

Inheritance Baltimore will work with Baltimore's Orita's Cross Freedom School to develop a new curriculum for combating racism in education, and to teach doctoral students the methods of Afro-centric education.