Sridevi V. Sarma, an associate professor in the Department of Biomedical Engineering, won $10,000 in Johns Hopkins Technology Ventures' Pitch It On! competition for female inventors. Sarma received the most votes from the 150 faculty, researchers, and investors who participated in the virtual event held Oct. 20. The competition was the culmination of the AccelHERator, JHTV's yearlong series dedicated to female inventorship at Johns Hopkins.

Sarma pitched EZTrack, which creates a heat map of the brain to help doctors determine the source of seizures in drug-resistant epilepsy patients. 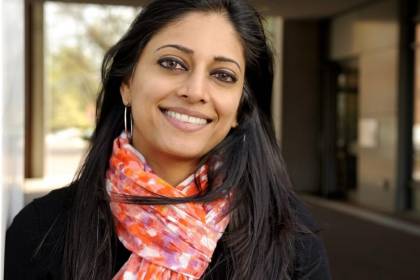 Each of the finalists—Sarma; Amanda M. Brown, an associate professor of neurology in the Johns Hopkins University School of Medicine; and V. Sara Thoi, an assistant professor of chemistry in the Krieger School of Arts & Sciences—had 10 minutes to present, giving the audience a rare look at a translational funding pitch process often done behind closed doors to industry professionals and other reviewers.

Two Johns Hopkins alumni, Melissa Fensterstock, co-founder and CEO of Landsdowne Labs, and Misti Ushio, CEO of Tara Biosystems, served as coaches, providing feedback on the substance and delivery of each of the pitches.

"The quality of all three presentations was phenomenal," Fensterstock said afterward.

Women found almost 40% of the companies in the United States annually but receive only 2% of venture funding, said Christy Wyskiel, executive director of JHTV, told the audience in opening remarks. At Johns Hopkins, women make up 44% of the faculty but only 11% of startup founders.

The goal of the AccelHERator program, funded by a federal grant from the Small Business Association's Small Business Innovation Research program, is to bring women innovators' research to fruition through applied research, translation, and entrepreneurship. Other AccelHERator programs this year included educational sessions on building a value proposition for a technology and best practices for pitching to attract investment.

"The best way to increase the ranks of female innovators and entrepreneurs is to encourage and assist them in their work," Wyskiel said after the Pitch It On! event. "The AccelHERator has been a great vehicle for celebrating this growing community at Johns Hopkins, and today's pitches were fantastic examples of the kind of groundbreaking work being done at the university."

Sarma, who leads the Neuromedical Control Systems Lab, formed a startup called Neurologic Solutions to license the EZTrack technology, which aims to help the approximately 20 million patients worldwide whose epileptic seizures cannot be treated with medication. These people can undergo surgery to identify and treat the troublesome spot in the brain, but the procedure only has an average success rate of 50%, according to Sarma.

The EZTrack cloud-based application analyzes recordings of brain waves to locate the starting point of seizures. In early testing, the technology accurately identified the surgical outcomes in treated patients 76% of the time, Sarma said.

Neurologic Solutions is seeking FDA approval for EZTrack, and Sarma said she plans to use the $10,000 to investigate insurance reimbursement for the technology.

"I wouldn't have ever done this venture if [JHTV] didn't come knocking on my door when they saw my provisional patent," Sarma said after being announced as the winner.

Thoi pitched a chemical additive technology for longer-lasting, less-toxic lithium sulfur batteries, which could store twice as much energy as a traditional lithium ion battery. Brown pitched a method for growing adult human microglia, which are essential regulators of normal brain function and can be used to develop treatments for dementia. 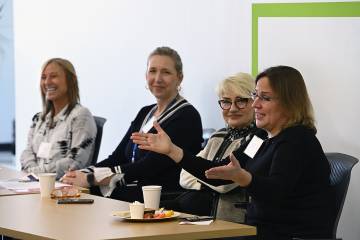