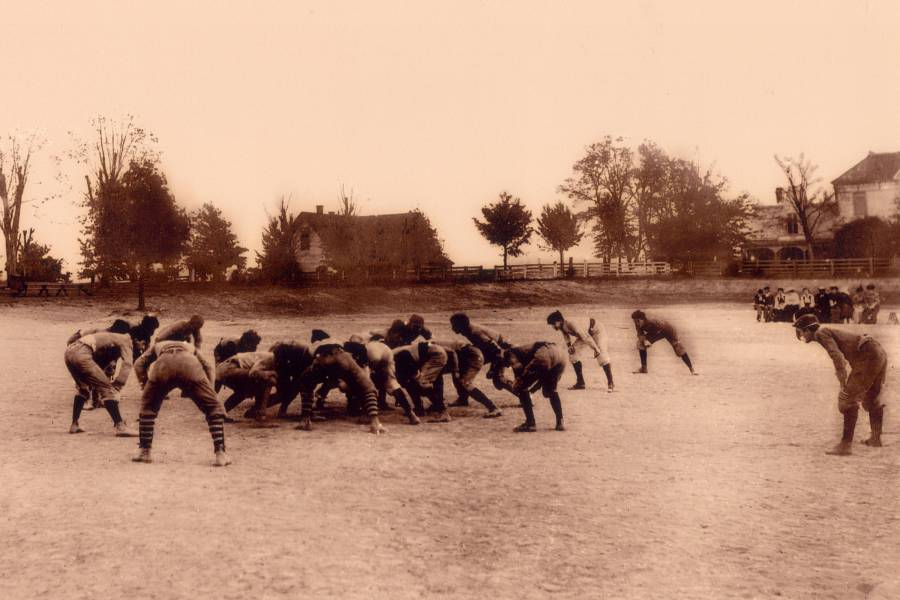 On Oct. 3, the Georgia and Auburn football programs will renew their historic rivalry, which effectively gave rise to big-time college sports below the Mason-Dixon Line. Two Johns Hopkins alums made it all happen.

For decades, hosannas have been raised to Charles Herty and George Petrie for seeding the colossus in the South known as college football. Herty, a chemistry professor, was the first coach at Georgia; Petrie, a historian, the first coach at Auburn. Each organized the varsity football programs at his respective school, and their teams first played each other on Feb. 20, 1892, in Atlanta. Auburn, then called the Agricultural & Mechanical College of Alabama, won 10-0. But the score is a minor detail.

Not just a game, Georgia vs. Auburn is revered as the "Deep South's Oldest Rivalry," page 1 fodder for the football bible. That rivalry will be renewed for the 125th time on Oct. 3 in the 92,746-seat Sanford stadium in Athens, Georgia—albeit at 20-25% capacity.

In many ways, the infatuation with college football in the South—the 100,000-seat stadiums, the megamillion dollar athletic budgets, the dominance in national championships (14 of the past 15 title winners hail from Southern states)—flowed from that rain-soaked, mud bath of a game in 1892 organized by two academics, who both attended Johns Hopkins to earn their doctoral degrees.

Yet, there remains a mystery around the relationship between Herty and Petrie (pronounced Pee-tree), and just how football entered their lives. A lot of details can get swept into history's dustbin over 130 years. 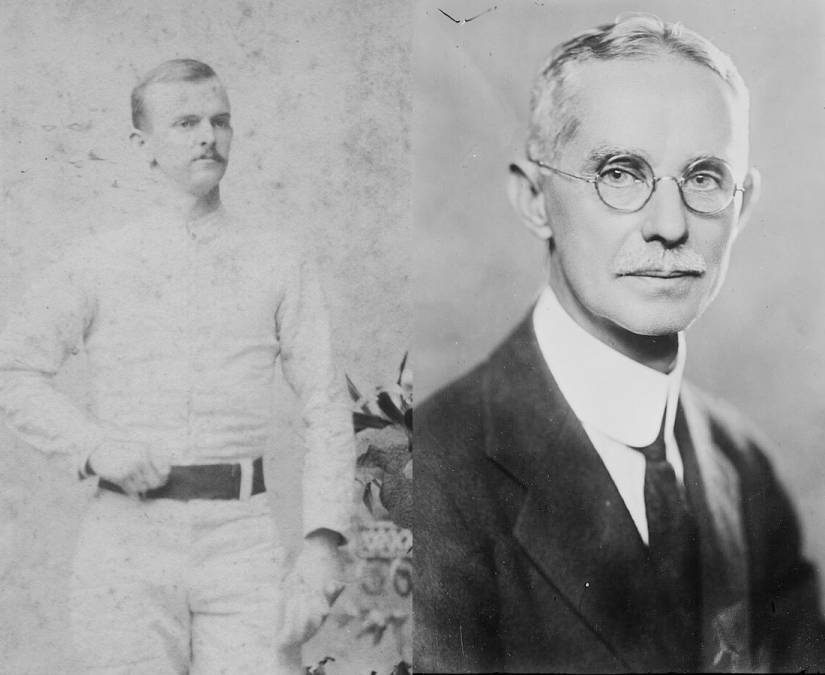 Both were sons of the South, to be sure. Herty was born in Milledgeville, Georgia and attended the University of Georgia. Petrie was born in Montgomery, Alabama, and attended the University of Virginia. They were on the Johns Hopkins campus—then located in downtown Baltimore along North Howard Street—together in 1889 and 1890. Both were working on their doctorates, with Herty graduating in 1890 and Petrie in 1891. Herty lived on West Madison St., Petrie resided on North Howard. Did they bump into each other on the street, recognize each other's distinct, two-syllable Southern speak, and talk athletics? Their courses of study were different—one a historian the other a chemist—so it is doubtful they shared classroom space. Did they attend one of JHU's seven football games in 1889, or the one game in 1890, and make a plan to introduce pigskin to the "Cotton States"?

"They were graduate students at the same time and the student body was small and they lived near each other, but they were not close friends, not from what I could find," said Mike Jernigan, the author of Auburn Man: The Life & Times of George Petrie.

In 147 boxes of Herty papers in the Emory University Library in Atlanta, not a trace of a relationship between the two men while at Johns Hopkins could be found, according to a researcher there. Jernigan, however, did find something gainful that illuminates Georgia vs. Auburn and the link back to Johns Hopkins.

Petrie's intention was to study languages at Hopkins when he enrolled in 1889, but he registered for a history class because he wanted to experience the seminar of Herbert Baxter Adams, who would become known as the founding father of the seminar method and of professional historians in the United States. Jernigan said it was because of Adams that Petrie became enthralled with history, a subject he had detested. 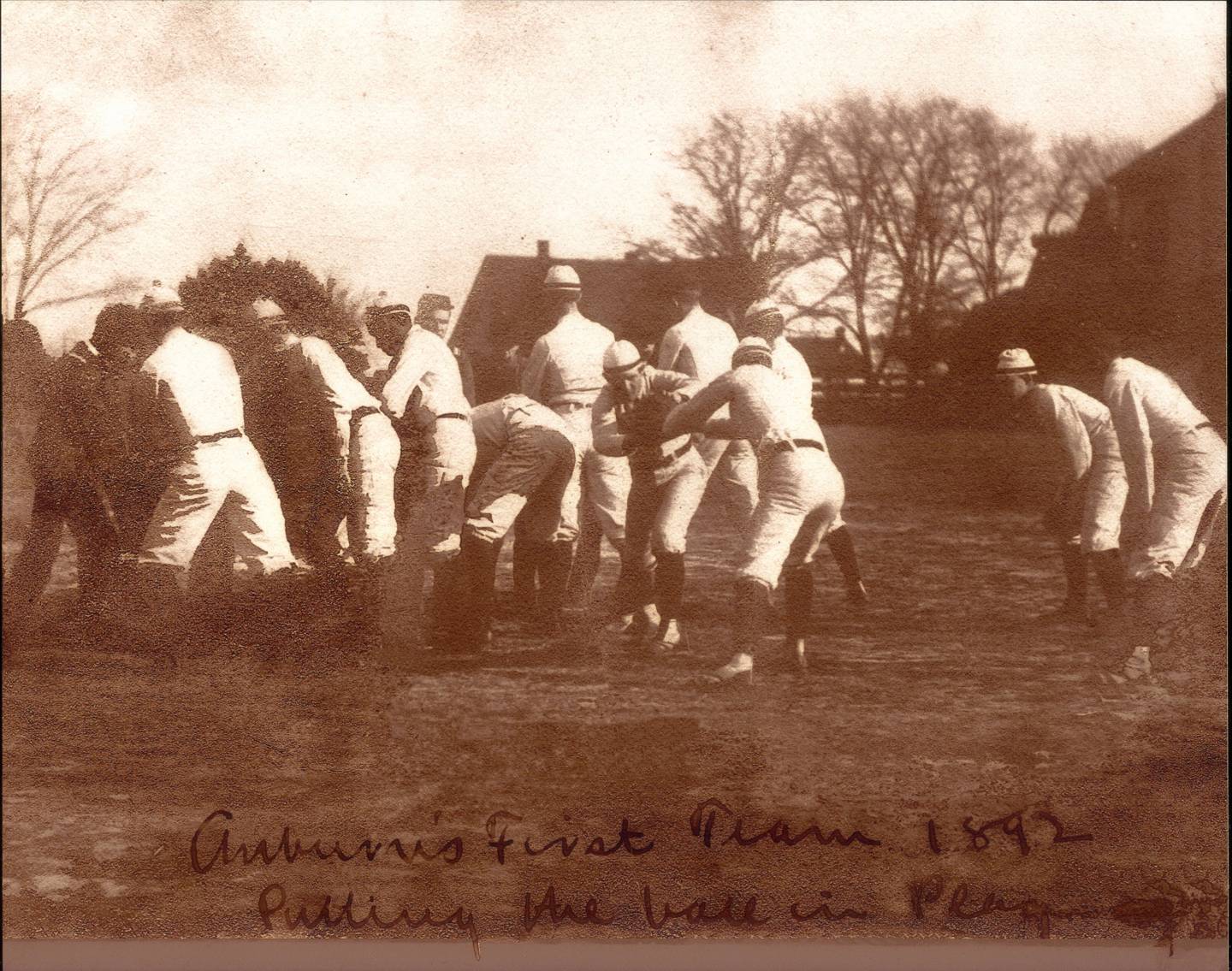 Image caption: The inscription on this photo reads "Auburn's First Team, 1892. Putting the ball in play."

Petrie would later take a history class from a visiting lecturer, Woodrow Wilson, who would become the 28th president of the United States. Wilson, who received a PhD from Hopkins in 1886, was regarded at the time as an authority on football. "Professor Wilson" coached football at Wesleyan in 1888 and 1889 and was, according to a former player on those teams, "a genius in the application of football strategy."

Petrie's relationship with Wilson goes deeper than that one class, however. Jernigan wrote in his book that Petrie's father, who lived in Charlottesville, Virginia, had come to know Wilson during his time studying law at the University of Virginia in 1879 and 1880. In Baltimore, Wilson's brother-in-law and Petrie lived in the same boarding house, and Wilson visited frequently, with football a likely topic of discussion.

When Petrie arrived at Auburn, he saw students playing "football" on a field in front of the administration building, though it was more akin to a soccer/rugby game with players kicking the ball from one end of the field to the other.

Petrie wanted to stay at Hopkins after earning his PhD, Jernigan writes, but there were no faculty openings because of a budget crisis, so he took a job as professor of history and Latin at Auburn in the fall of 1891. When he arrived at Auburn, he saw students playing "football" on a field in front of the administration building, though it was more akin to a soccer/rugby game with players kicking the ball from one end of the field to the other.

Petrie started to recruit the "huskiest" players and organize them to play a more modern game of football like the sort he might have witnessed up north at schools like Harvard, Yale, the College of New Jersey (now Princeton) and Johns Hopkins. Two of Petrie's top players at Auburn were not students but professors. The others were cadets, who had to be taught the sport. 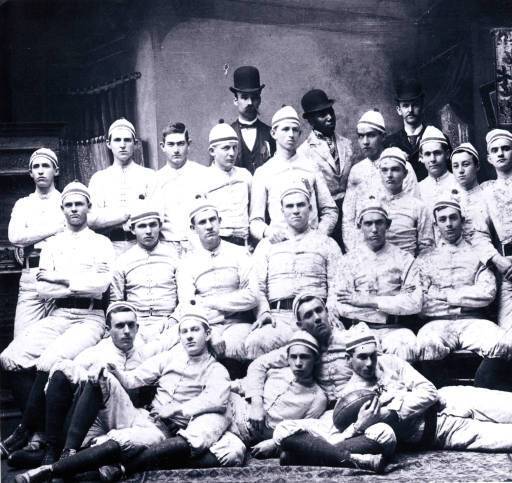 Meanwhile, Herty, who was 175 miles northeast in Athens, was busy putting together his own squad in the fall of 1891. On the first day of practice, according to multiple historical sources, he tossed a ball into the air and had students scrum for it. That was the tryout. Herty would do that 11 times to get his starting team. Whoever came up with the ball in the scrum made the cut. He went by "trainer," not coach.

The first game in the history of Georgia football was played January 30, 1892, against Mercer in Athens. UGA won, 50-0. It was assumed that Petrie, building his Auburn squad for the 1892 season, knew that Georgia had a formidable team and communicated "Let's play" to Herty to set the stage for the historic game.

As it turns out, there's more to the story than that.

Few people in the South knew the rules of the Northern game, so John Kimball, an Auburn graduate who lived in Athens, had asked Petrie to come to Athens and "umpire" the Georgia-Mercer game. Instead, Petrie sent one of his players, Frank Lupton, to umpire, Jernigan writes.

Soon after the thrashing of Mercer, through Kimball, Petrie issued an invitation to Georgia to play Feb. 20 in Piedmont Park in Atlanta, part of a three-day weekend celebrating George Washington's birthday. Lupton, the Auburn player, no doubt provided the first scouting report in the history of Southern college football. 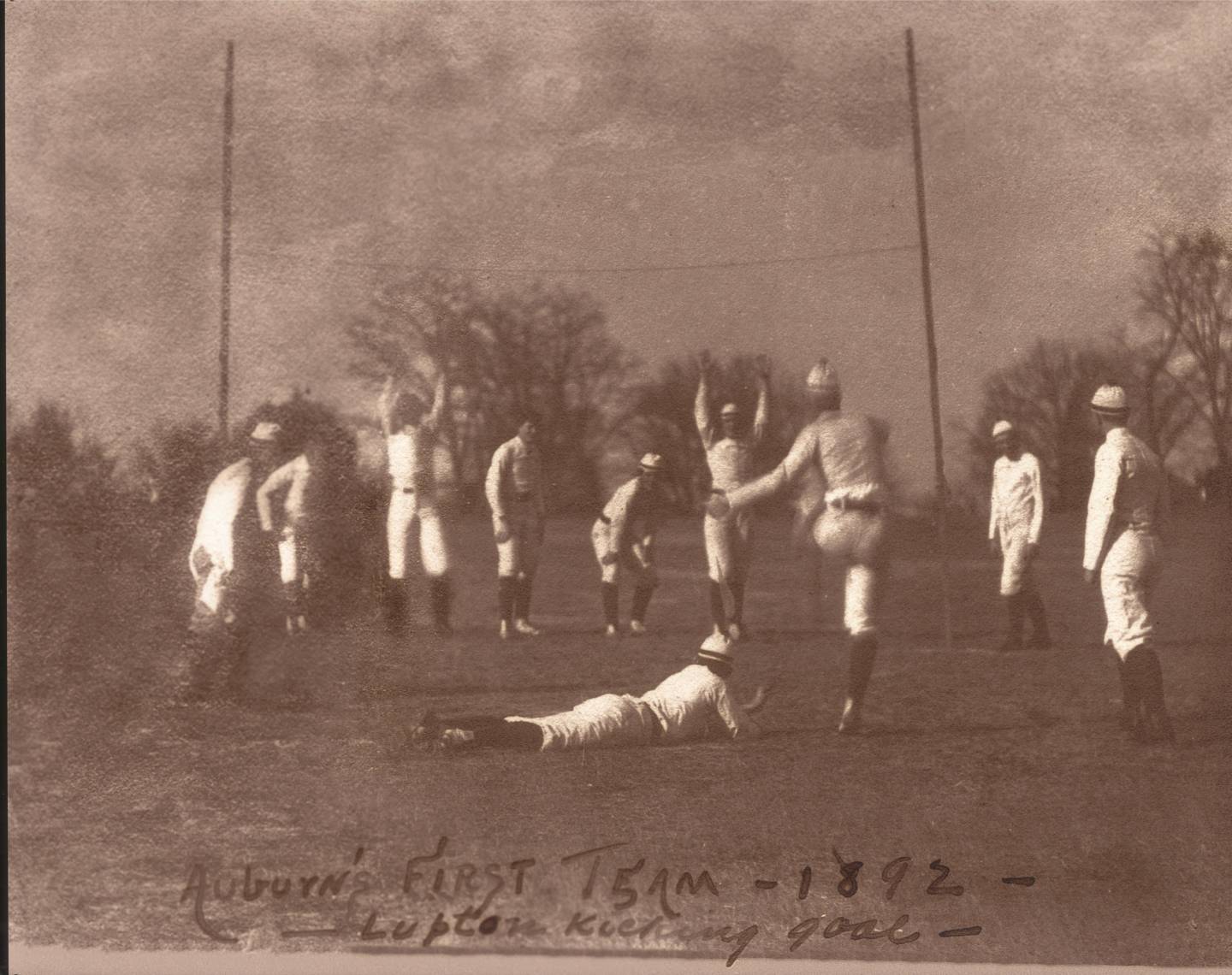 It was chilly and raining, the kind of weather and subsequent marsh fit for a, well, goat.

The Auburn uniforms of white coat and blue hose were picked out by Petrie and stitched in Boston. The uniforms, which collectively cost Petrie $35.06 of his own money, according to Jernigan's book, became caked with mud as the game wore on. On the other side of the field, adorned in a black coat with the letters "UG" was the Georgia mascot, a goat named Sir William.

According to the Atlanta Constitution, attendance for that first historic matchup was between 5,000 and 8,000, and gate receipts were $800.

Both teams used as their offense the Flying V formation. After a scoreless "first inning" of 45 minutes, Auburn scored 10 points in the second inning. According to the Atlanta Constitution, fans stormed the field. The winning team, Auburn, triumphantly walked 3 miles back to their hotel downtown.

Jernigan has pages and pages in his book detailing the lead-up to the game, the game itself, and the aftermath. (Two years later, Herty would help organize the Southern Intercollegiate Athletic Association, which included Johns Hopkins University. The SIAA would become the Southern Conference, which split and created the Southeastern Conference, now a billion dollar enterprise.) That there are documents galore is owed to the influence of Johns Hopkins University, he said. Adams, the school's history icon, preached to his students the value of "original research" and preserving documents. Jernigan said Petrie learned those lessons and saved a treasure trove of documents and newspaper clippings on the Georgia-Auburn rivalry.

Petrie himself wrote an account of the game for his hometown newspaper, The Montgomery Advertiser. He clipped out a copy and sent it to Wilson.

Herty saved documents and scraps of his life, too, but the volumes in Emory Libraries were devoted to his life in business. Born in 1867, he was the only son of a Confederate veteran. He was also a child of the Reconstruction and saw the toll the Civil War had taken on the Cotton States. Herty was devoted to trying to industrialize the South through his passion, which was chemistry, not football.

In her book Crusading for Chemistry: The Professional Career of Charles Holmes Herty, author Germaine Reed wrote, "Charles Herty played a major role … to promote and popularize chemistry among every element in American society."

It was Herty who developed the process for tapping the resin in pine trees that built the turpentine industry in the U.S. and saved thousands of trees. Herty's research into pulpwood in Savannah, Georgia, showed how pine trees could be used for the manufacture of newsprint. Reed wrote that Herty, who started the athletic program at Georgia, also helped grow the athletic department at the University of North Carolina by recruiting football and baseball coaches.

While Herty left academia in 1916, Petrie remained at Auburn as the head of the History Department and dean of the graduate school until he retired in 1942. He wrote the Auburn Creed in 1943. It remains a living document on the essence of Auburn and how students should conduct themselves. Petrie would also organize, and coach, the school's baseball team and arrange its first intercollegiate game.

The 1892 football season was the only season the two men coached. Herty went 1-1. Petrie was 2-2. In such a short period, it seems an exaggeration to say that Petrie and Herty could leave such an indelible mark. But they got there first and that, with their character and conduct, will forever distinguish them in the history of college football in the South.

Correction: An earlier version of this article mischaracterized the degree received by Woodrow Wilson in 1886. The Hub regrets the error.