Established through a $5.4 million gift from businessman and philanthropist Louis B. Thalheimer, the fund supports vital proof-of-concept and validation studies of valuable technologies at Johns Hopkins and has awarded more than $1.3 million to 16 projects since 2016. Grants range from $25,000 to $100,000. Recipients have formally reported their inventions to Johns Hopkins Technology Ventures, which is the patent, licensing, and technology commercialization arm of the university.

A record 42 researchers applied for the latest funding round. Finalists pitched their proposals virtually in late May to an outside panel of independent researchers and investors, innovation executives, and venture investors.

"The number of applicants not only set a new precedent but demonstrated the strength of the applicant pool," said Nicole Snell, alliance manager for investment partnerships and translational funding at FastForward, JHTV's startup program. 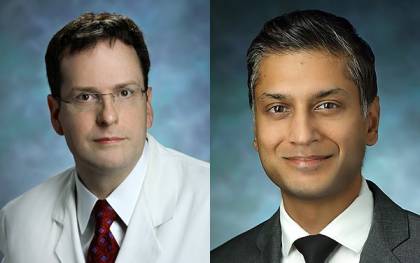 Learn more about the grantees below.

Many of the 60,000 Americans annually diagnosed with Parkinson's disease rely on deep-brain stimulation to manage their symptoms. However, DBS uses nonadaptive devices that continuously deliver the same amount of electricity to the brain regardless of the patient's symptoms and require implanting bulky hardware that can cause skin erosion and infection, as well as frequent visits to a doctor to program or adjust the device.

William S. Anderson, an associate professor of neurosurgery, and his team have developed ePACStim, an adaptive brain implant system that delivers targeted and customized electrical stimulation to suppress excessive phase amplitude coupling, or PAC, in the motor cortex, an electrophysiological biomarker specific to Parkinson's disease. The minimally invasive device allows for near-real-time wireless monitoring, and has the potential to treat other common neurological conditions marked by increased PAC levels, including Tourette's syndrome, Alzheimer's disease, and obsessive-compulsive disorder.

The technology is available for licensing through Johns Hopkins Technology Ventures, which is also pursuing patent protection. The Thalheimer funding will go toward upgrading the current ePACStim system to achieve real-time responsiveness and demonstrate motor symptom improvement in patients, as well as building a prototype ready for a pilot clinical study.

Anderson and his team participated in the I-Corps program to evaluate the potential of the technology and are in talks with Longeviti Neuro Solutions, a Johns Hopkins startup, to develop an implantable cranioplasty device to house ePACStim.

A longer-lasting treatment for wrinkles and migraines

Americans received 7.4 million aesthetic neuromodulator injections such as Botox in 2019 to make their faces look younger, creating a $5 billion market for the most commonly performed minimally invasive aesthetic procedure. These neuromodulators can also relax muscles for several medical conditions, including relief from migraines and stiff muscles.

The leading neuromodulators, however, require reinjection every three months. They can also diffuse, leading to unwanted paralysis of nearby muscles. NanoTox is a novel product that provides a localized, sustained, and linear release of the neuromodulator that requires reinjections only every six to nine months or more. It was developed by Sashank Reddy, an assistant professor of plastic and reconstructive surgery, associate researcher at the Johns Hopkins Institute for NanoBioTechnology, and medical director of Johns Hopkins Technology Ventures; and Hai-Quan Mao, professor of materials science and engineering and associate director of the Institute for NanoBioTechnology.

The investigators formed a startup through FastForward called SpaceTime to license NanoTox and the underlying platform technology. They plan to use the Thalheimer funding to fully demonstrate NanoTox's features and prepare the technology to enter investigational new-drug-enabling studies for aesthetic and medical indications. NanoTox also received funding earlier this year through TEDCO's Maryland Innovation Initiative.

"The Louis B. Thalheimer Fund for Translational Research has made a significant impact on both our faculty and their research," said Brian Stansky, senior director of FastForward. "Drs. Reddy and Mao are our first repeat recipients with their prior Thalheimer award providing funding for critical steps on LifeSprout's path to a recent $28.5 million Series A financing. Similarly, Dr. Anderson's team recently received an MII Technology Assessment award that funds key milestones built on the work funded by their Thalheimer award. We are truly fortunate to be able to provide these types of translational funding for our world-renowned faculty."