The majority of Johns Hopkins varsity sports will press pause on competition and adapt in-person activities this fall as college athletics continues to contend with the challenging realities of restarting in the midst of a pandemic.

On Tuesday afternoon, the Centennial Conference—of which Johns Hopkins is a member—announced that it will suspend intercollegiate competition for fall sports due to health and other COVID-19-related concerns. Seventeen of JHU's 24 varsity teams—including football, men's and women's soccer, men's and women's cross country, field hockey, and volleyball in the fall—compete in the NCAA Division III athletics conference.

The conference presidents will reevaluate the decision by the end of September, based on an assessment of sports-specific activities and the experiences on the member schools' campuses, all of which are located in Maryland and Pennsylvania. The presidents have already determined that football will not be played in the fall this year, though the conference announced that it will explore the possibility of shifting certain fall sports, including football, to the spring.

"It's hard for me to say right now what fall sports will look like. I would love for our teams to be able to practice. We just don't know."
Jennifer Baker
Director, Athletics and Recreation

Jennifer Baker, JHU's director of athletics and recreation, is currently working with a Centennial Conference advisory group and the Johns Hopkins Health Advisory Group on protocols for practices, workouts, and other activities for all varsity teams.

The Health Advisory Group, made up of leading subject matter experts from the Hopkins faculty, provides guidance to university leadership regarding factors and metrics that should be used to make determinations about JHU's phased reopening. Working with athletics staff and coaches, the group will make recommendations about how to modify operations to ensure the health and safety of all involved, including the greater campus community.

"It's hard for me to say right now what fall sports will look like," Baker said. "I would love for our teams to be able to practice. We just don't know."

Working with staff, Baker has devised a plan for phasing in activity—pending guidance from the Health Advisory Group and JHU leadership—that would include first practicing in small, physically distanced groups of less than 15 people. Over time the groups could grow in size, depending on health guidance at the time. Other protocols would include but not be limited to no sharing of water bottles, regular health screenings, sanitizing balls and equipment before and after play, and use of hand sanitizer.

"We will do whatever we can to minimize the potential spread of the virus and limit exposure," she said. "I don't foresee practice with no restrictions until we are further along in this pandemic and can assure for the safety of our students."

Baker acknowledged that some sports by their nature are more conducive to physical distancing, including swimming, cross country, and the other non-contact sports. She said that no decisions have been made about when and whether fans will be able to attend athletics events once they do resume.

No college athletics events have been held since mid-March, but the NCAA allowed colleges and universities nationwide to bring athletes back to campus for voluntary workouts as early as June 1. Dozens of schools have since reported athletes testing positive for COVID-19 since returning to campus, in some cases prompting workouts to be halted.

Johns Hopkins athletes currently are only permitted to do virtual team activities while also working out individually. The university typically doesn't permit organized team activities during the summer, when coaches often spend time recruiting and attending camps and tournaments in-person.

Student-athletes normally return to campus before the general student population to begin preparing for their seasons, but this year they will return at the same time as other students. Baker said she's not sure what comes next, but she said she hopes that by September, players will be able to practice together and prepare to compete in October.

College sports can learn from professional sports that have already started or are in the process of restarting, in terms of their safety protocols, Baker added. But unlike professional sports you can't put college students in a bubble and isolate them away from the general population.

"College athletes are students first and are embedded into the campus community. There is only so much bubbling you can do here," Baker said. "But we are watching what these leagues are doing. We're also watching what Division I sports are doing very intently." 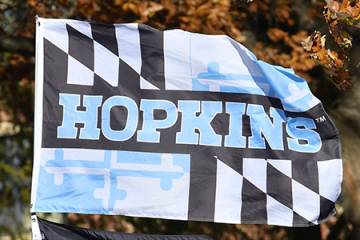 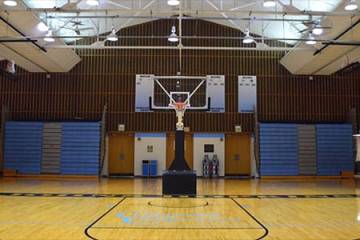 Published March 6, 2020
Blue Jays will host first-, second-round games this weekend in an empty Goldfarb Gym; individuals who purchased tickets in advance can contact the Department of Athletics for a refund