Justin Lee and Eric Song, who earned degrees from JHU in 2015, are among 30 individuals recognized for their potential to make outstanding contributions

Two Johns Hopkins alumni are among the recipients of the Paul and Daisy Soros Fellowships for New Americans, awards that recognize their potential to make outstanding contributions to the United States. 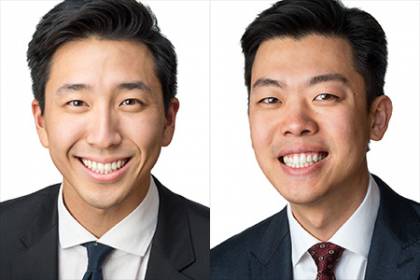 Justin Lee and Eric Song, who both earned degrees from Johns Hopkins in 2015, are among 30 Soros Fellows selected from a pool of more than 2,200 applicants. The full list of honorees was announced earlier this week.

Soros Fellows are immigrants or the children of immigrants, green card holders, or naturalized citizens. This is the first year that recipients were selected regardless of their own or their parents' immigration status. The award is accompanied by $90,000 over two years to support their graduate studies.

Born in Los Angeles to Korean immigrant parents, Lee was inspired to study medicine after his grandparents died while he was in high school. As an undergraduate student at Johns Hopkins, Lee studied a variety of science and medical fields, including biomedical research, organic chemistry, and tissue engineering. He graduated with a degree in global environmental change and sustainability before enrolling in a graduate program at the California Institute of Technology. He hopes to become a neurosurgeon and develop new cellular tools using synthetic biology that will transform the way neuropsychiatric diseases are diagnosed and treated.

Eric Song was born in Seoul, South Korea, and moved as a child with his family to Buena Park, California. After receiving his bachelor's degree in biochemistry at the University of Southern California, Song came to Johns Hopkins to pursue a master's degree in biotechnology. While at Hopkins, he conducted research on optimizing gene delivery methods to help brain tumor and cystic fibrosis patients. He is a MD/PhD student in immunology at Yale University, where he studies brain tumors. Hb