Schlegel, who has served as Bloomberg School's COO and CFO since 2009, will oversee the areas of human resources, procurement, information technology, and risk management and compliance

Johns Hopkins University's Office of Finance and Administration has chosen Jane Schlegel, currently the executive vice dean for finance and administration at the Johns Hopkins Bloomberg School of Public Health, to fill a new leadership role that will oversee the areas of human resources, procurement, information technology, and risk management and compliance.

As vice president and chief administrative officer, Schlegel will also be charged with building out and overseeing the university's emergency management capability and lending expertise on major projects related to facilities, real estate, and security. She will begin on April 30. 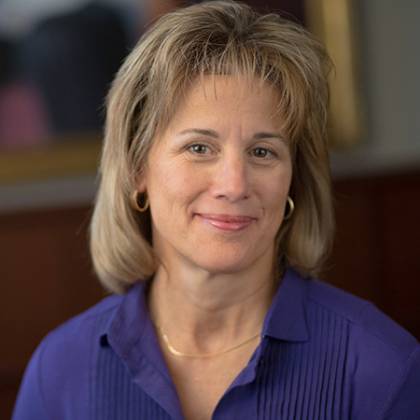 "Jane is an accomplished leader who is admired by faculty and staff and highly regarded by her peers and university leaders," Ennis says.

"I plan to use that on-the-ground experience and ask what we can make better from a client perspective," she says. "I don't want to lose the focus on who we really work for: the faculty, staff, and students."

Schlegel says she also understands the breadth of functions that fall under the administration organization, noting that her current role includes overseeing HR functions, the IT department, facilities and real estate, and purchasing across the Bloomberg School's 10 academic departments as well as serving as the school's incident commander for emergency situations. She has been responsible for the day-to-day operations of approximately 350 staff, maintenance of more than one million square feet of space, and a budget of nearly $600 million.

"I am looking forward to working with the teams at the university level to see where the opportunities are to be even more customer oriented," she says. "I think it will be definitely challenging, and fun."

Ennis described Schlegel as a "go-to" person to assist with universitywide initiatives and searches because of her division-level expertise and her insightful perspectives on issues and opportunities across the institution.

"I am confident that she will seamlessly assume the broad scope of responsibilities of this inaugural role and, in collaboration with me, her team, the divisional business officers, and senior leaders across the university, will enhance operational performance in support of the University's teaching, research, patient care, and service missions," Ennis says.