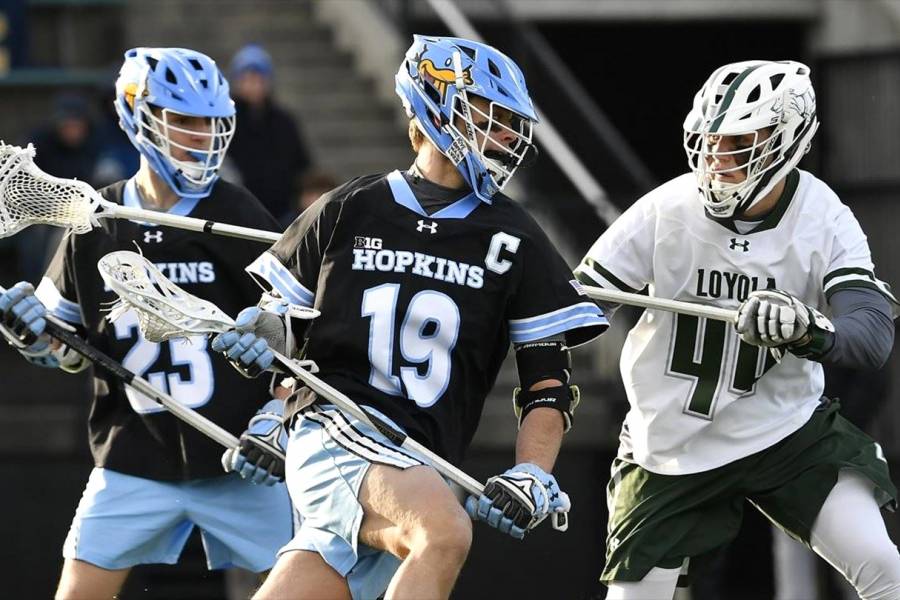 Hopkins attack comes up short in loss to Loyola

Host Loyola put together a decisive scoring run in the middle of the game, then held off a late charge by the Johns Hopkins men's lacrosse team for a 10-7 win on Saturday afternoon.

The No. 16 Greyhounds (1-1) used a 6-1 scoring spurt to turn a 4-3 lead into a 10-4 advantage early in the fourth quarter. The 11th-ranked Blue Jays (1-1) cut the deficit to 10-6 with a pair of quick goals by sophomore Evan Zinn and junior Connor DeSimone but scored just once over the final 10 minutes.

Up 4-3 late in the second quarter, Loyola extended its lead when Kevin Lindley cut to the middle, took a feed from Joey Kamish, and beat Blue Jays goalie Ryan Darby from nine yards out to make it 5-3 at the half. The Greyhounds padded the lead with unassisted goals from Aiden Olmstead and Adam Poitras in the first eight minutes of the second half, and Lindley got his fourth of the game with 4:14 on the third-quarter clock to extend the lead to 8-3.

Johns Hopkins halted the run with 1:41 to play in the third period when senior Forry Smith finished from 10 yards out after taking a nice feed from sophomore Garrett Degnon, but the Greyhounds scored twice in the first 3:23 of the fourth quarter to push the lead to 10-4 lead.

Smith paced the Hopkins attack with three goals, and Degnon added two. Zinn had a goal and two assists while taking a team-high 11 shots. Darby finished with 11 saves in goal. Complete box score

The Blue Jays return to action on Saturday when they host No. 8 North Carolina (3-0) at 1 p.m. at Homewood Field. In their first three games—wins against Colgate, Mercer, and Lafayette—the Tar Heels have totaled 57 goals while allowing just 20.