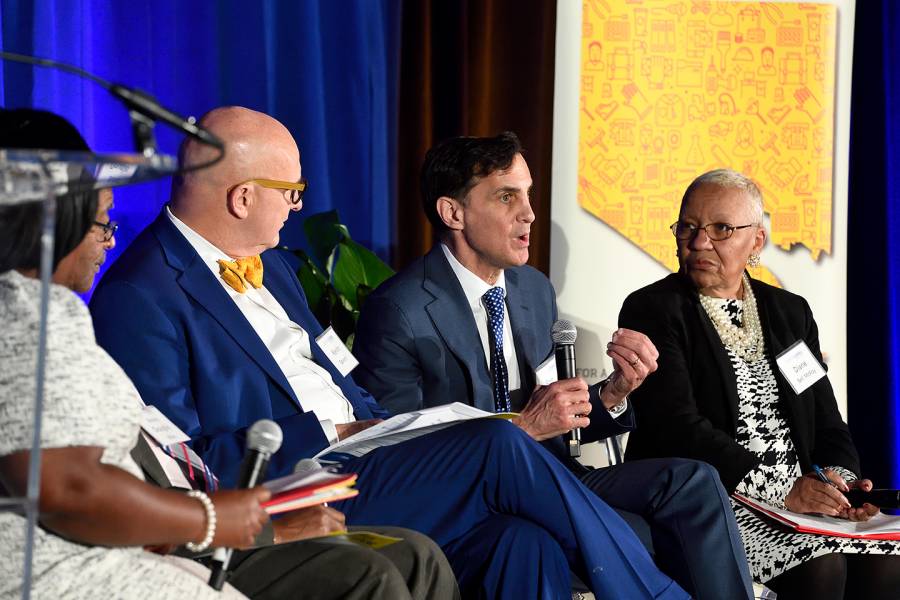 By Jill Rosen and Katie Pearce

In announcing new HopkinsLocal goals tightly focused on addressing inequality in Baltimore, Johns Hopkins is doubling down on efforts to grow the city's economy by bringing work and opportunity to the people in the city who need it most.

The university and health system surpassed their original three-year goals to build, hire, and buy locally that were articulated when the HopkinsLocal initiative launched in 2015. To date, 1,457 city residents have been hired for jobs at Johns Hopkins and an additional $113 million has been spent with city vendors.

Under the next set of three-year goals, the university and health system will continue to hire local workers and buy from local businesses and are pledging to do even more to support the city's racial minorities, women, and veterans to fuel individual and community wealth.

"With the launch of HopkinsLocal in 2015, Johns Hopkins deepened and strengthened our commitment to Baltimore and embedded the ethos of economic inclusion in all we do," said Johns Hopkins President Ronald J. Daniels. "Over the past four years, we have far surpassed our initial goals, but there remains more we can and must do to requite this commitment to our hometown. Today, our new goals apply the lessons learned so we can expand and better target our efforts, creating more jobs and opening more pathways to economic opportunity for our neighbors and their families."

University and health system leaders publicly unveiled the new goals today at a job and business fair at Baltimore's Reginald F. Lewis Museum. The event offered networking opportunities and a variety of workshops for local small businesses and employment seekers, including specific guidance on working and contracting with Johns Hopkins.

In the next phase of HopkinsLocal:

Johns Hopkins will not only continue to increase its number of local hires, but it will also expand its targeted city neighborhoods and increase its focus on the career advancement and growth of these new hires. Specific goals include:

The university and health system will not only continue to buy more from local-owned, minority-owned, women-owned, and veteran-owned companies, but they will advise targeted vendors on strategies to grow their businesses and develop new jobs. Specific goals include:

Johns Hopkins will not only continue to increase participation with disadvantaged minority, women, and local construction businesses, but also develop programs to support their growth and capabilities, and increase their jobs. Specific goals include:

Lastly, the university and health system pledge to assign at least $75 million of the Johns Hopkins endowment to be managed by a minority-owned firm.

"This effort further builds on our commitment to Baltimore by connecting Johns Hopkins with local people and businesses," said Kevin Sowers, president of the Johns Hopkins Health System. "To truly succeed, Johns Hopkins and Baltimore must work together. Our goal is to increase economic opportunity, so that our success is the community's success."

"Our new goals apply the lessons learned so we can expand and better target our efforts, creating more jobs and opening more pathways to economic opportunity for our neighbors and their families."
Ronald J. Daniels
President, Johns Hopkins University

In addition to surpassing their original economic and employment goals for HopkinsLocal, the university and health system have committed tens of millions annually to minority-owned, women-owned and disadvantaged businesses in the design and construction industry. In addition, 74 design and construction businesses completed the BLocal BUILD College program, 548 previously convicted individuals were hired at the university and health system, and 26 non-local companies agreed to hire, procure, or invest in Baltimore.

On Tuesday evening, community leaders joined Daniels, Sowers, and other stakeholders at an event on the university's Homewood campus to discuss economic inclusion in Baltimore and the next phase of the HopkinsLocal initiative. Alicia Wilson, Johns Hopkins' vice president for economic development, moderated a discussion in which Daniels and Sowers were joined by Bishop Douglas Miles, pastor of Koinonia Baptist Church, and Diane Bell-McKoy, president and CEO of Associated Black Charities, to talk about the origins of HopkinsLocal, the lessons learned in the first four years, and the next steps.

Two Baltimore business owners and a recent Johns Hopkins hire also spoke at the event, about both their experiences with HopkinsLocal and the significant impact a strong economic foundation can make for families, communities, and the city as a whole.

"The success of HopkinsLocal is a direct result of the power of meaningful local partnerships," Wilson said. "Our success is shared—shared with those we hire, those we buy from, and those we build with locally. We are in Baltimore, of Baltimore, and share a destiny with Baltimore. 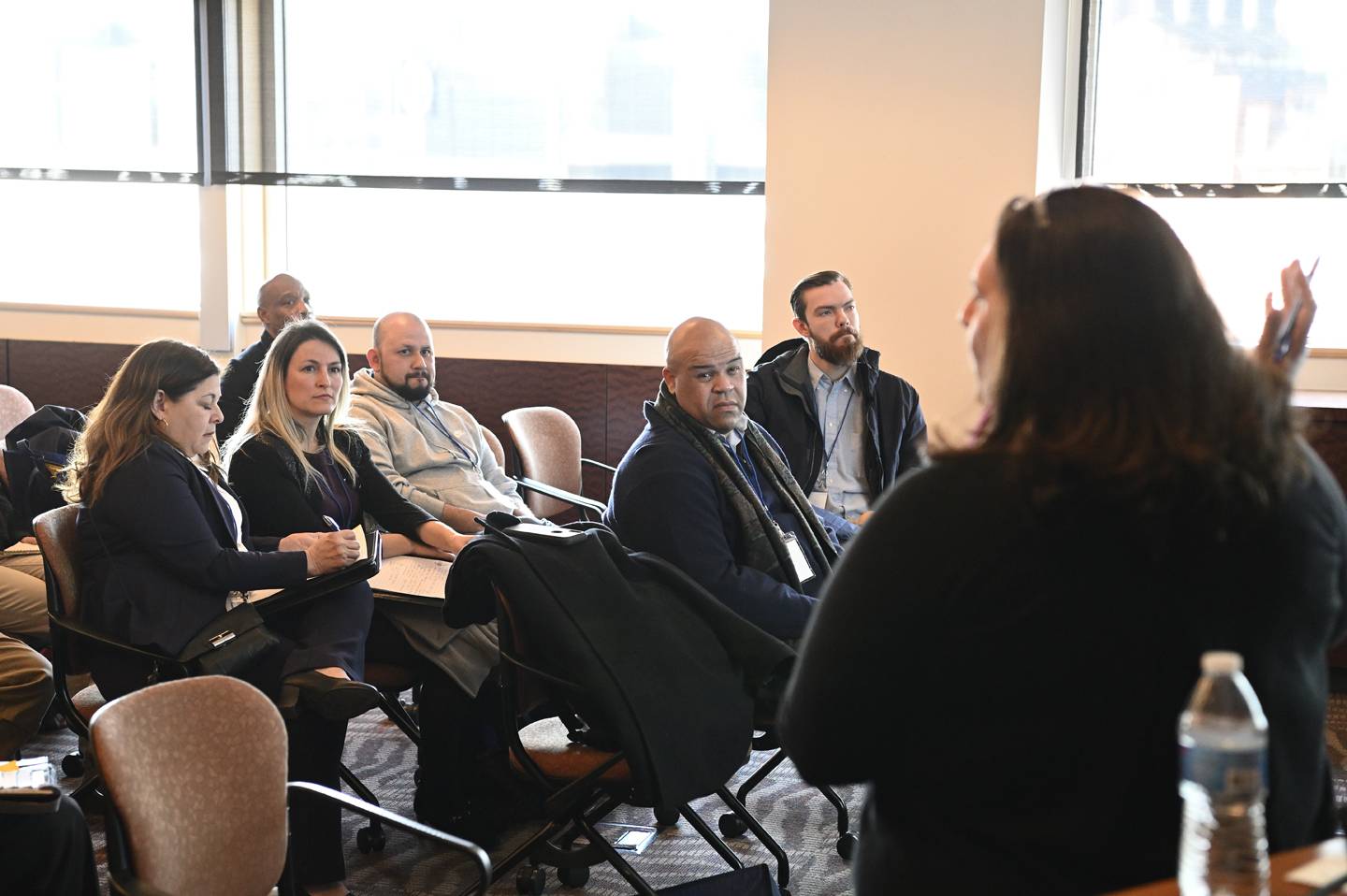 Image caption: Today's job and business fair at the Reginald F. Lewis Museum offered a variety of workshops for local small businesses and employment seekers, including specific guidance on working and contracting with Johns Hopkins

"We are redoubling these efforts not just because it's the right thing to do," Wilson added during remarks at today's event, "but more importantly because Johns Hopkins' success is and always will be intertwined with the success of Baltimore."

One of today's workshops focused on the process for vendors to build purchasing relationships with the university and health system. Representatives from Johns Hopkins emphasized that location matters: the HopkinsLocal efforts specifically aims to increase the number of contracts with businesses based inside of the city. In some cases, that means encouraging firms to relocate here.

"If we can, we want to encourage you to move into the city, put an office here, and hire city residents," said Patricia Sainsott, a small business assistant at the university.

In another workshop, Johns Hopkins recruiters gave tips for applying for positions at university, including how to navigate the jobs.jhu.edu website. Talent acquisition consultant Darrell Coffey recommended joining the JHU Talent Network to create a candidate profile, then setting up job alerts to be among the first to know about new and relevant openings.

Darcy Sullivan, a member of the new HopkinsLocal advisory council, said she came to today's event to see what the HopkinsLocal effort looks like in practice.

"Since the council just started, I'm interested in what Hopkins is doing as far as publicity and action in the community—I'm interested in learning who's here and what's being talked about," said Sullivan, an employment specialist with the Maryland Food Bank. "They've put together a lot of different resources for people." 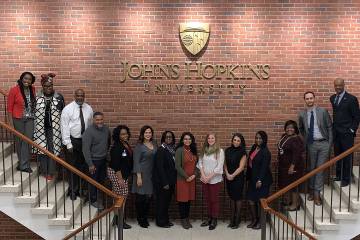 Forming the vision for HopkinsLocal