Blue Jays open their 13-game season on Feb. 8 at home against Towson 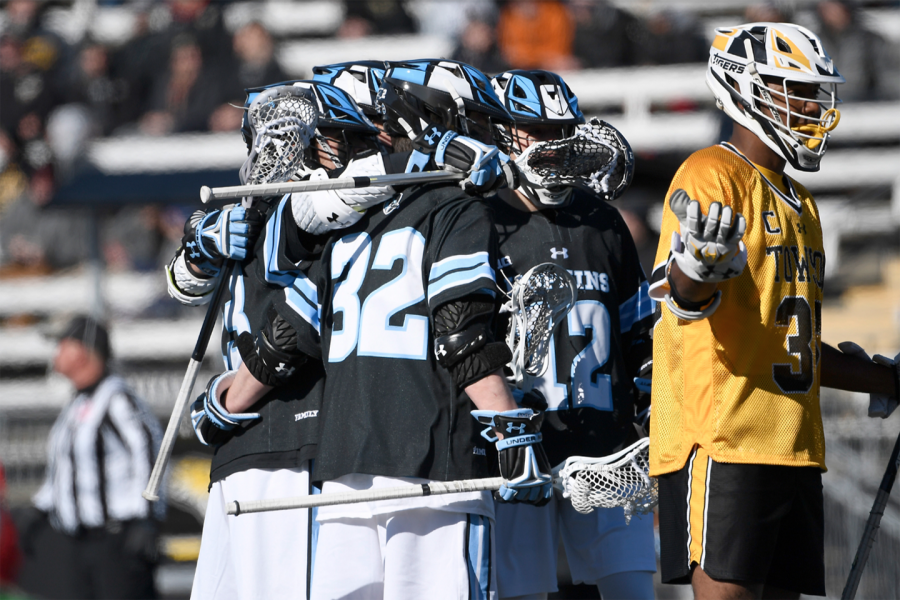 Five teams that made the NCAA tournament last spring are among the 13 teams on Johns Hopkins University's 2020 men's lacrosse schedule, which begins with a game against Towson on Feb. 8 at Homewood Field.

The Blue Jays open Big Ten Conference play March 28 against Michigan at Homewood Field and wrap up the regular season at home on April 25 against rival Maryland.

Hopkins finished the 2019 season with an 8-8 record that included two wins against Maryland and an overtime loss to top-ranked Penn State in the Big Ten tournament championship game. The Blue Jays season ended with a loss to Notre Dame in the first round of the NCAA tournament.

Hopkins has named three captains for the 2020 season—senior midfielder Forry Smith, senior defenseman Owen Colwell, and sophomore attackman Joey Epstein. Smith becomes just the 15th Johns Hopkins player since 1950 to serve as a captain more than once. Epstein is the first sophomore captain at Johns Hopkins since Kevin Mahon in 1975.

Feb. 22 vs. North Carolina, TBA: North Carolina visits Homewood Field for the 49th renewal in this series. Johns Hopkins topped the Heels 11-10 last season in Chapel Hill to grab a 26-22 series lead. Six of the past 11 games in the series have been decided by two goals or fewer, and the visiting team has won four straight.

March 7 vs. Syracuse, TBA: This will be the 59th all-time meeting between the Orange and the Blue Jays with Johns Hopkins holding a 30-27-1 series advantage. The teams first met in 1921 when they played to a 4-4 tie. Since 1995, 17 of the 31 games between the two teams have been decided by two goals or fewer, and 14 of those have been one-goal affairs.

March 10 vs. Mount St. Mary's, TBA: Johns Hopkins and Mount St. Mary's tangle for the eighth time since their first meeting, a 19-6 Blue Jays victory in 2006. Johns Hopkins has won all seven previous meetings, including last season's 11-4 victory. Hopkins has scored at least 11 goals in all seven previous meetings; the Mountaineers have been held to six or fewer in six of the seven.

March 14 at Navy, TBA: After a two-year hiatus, the Johns Hopkins-Navy series renews for the 91st time. The teams first met in 1908 (a 6-1 JHU victory), and Hopkins leads the all-time series 62-27-1. Since 1998, eight of the 11 games between JHU and Navy played at the Naval Academy have been decided by one goal.

March 17 at Delaware, 7 p.m.: The Blue Jays and Blue Hens meet for the 12th time in a series that began with a 19-6 Johns Hopkins victory in 1980. JHU has won all 11 previous meetings, including last season's 12-10 come-from-behind victory at Homewood Field. Hopkins has scored at least 14 goals in seven of the previous 11 games against Delaware.

March 28 vs. Michigan, 1 p.m.: Big Ten play opens as Michigan visits Homewood Field. Hopkins owns a 7-0 series lead against the Wolverines, who are making their fifth trip to Baltimore since the series began with a 17-8 Blue Jays victory in 2013.

April 4 or 5 at Rutgers, TBA: Johns Hopkins and Rutgers meet for the 41st time in a series that dates to a 13-0 Blue Jays victory in 1920. JHU leads the all-time series 34-6 after grabbing a 15-13 victory against the Scarlet Knights last season at Homewood Field.

April 11 vs. Penn State, TBA: The 2020 meeting between Johns Hopkins and Penn State will be the 13th since the Blue Jays and Nittany Lions first met in 1916 (a 14-1 JHU victory). Johns Hopkins leads the all-time series 9-3 and has won four of seven since men's lacrosse debuted in the Big Ten in 2015. In the seven meetings since the Big Ten was formed in 2015, Hopkins and Penn State have combined for at least 21 goals in all seven games and 24 or more in four of the seven.

April 18 or 19 at Ohio State, TBA: One of the most competitive series in the Big Ten renews for the 15th time when Johns Hopkins visits Ohio Stadium. The Blue Jays lead the all-time series 9-4, but the teams have split the eight meetings since the Big Ten added men's lacrosse in 2015. The Blue Jays have outscored the Buckeyes 92-90 in those eight games, with six of the eight decided by three goals or less.

April 25 vs. Maryland, 2 p.m.: All-time meeting number 120 in the greatest rivalry in college lacrosse will take place on Homecoming at Homewood Field. The Blue Jays lead the all-time series 74-44-1 after sweeping the Terrapins last season. The lower ranked team has won eight of the past 12 Johns Hopkins-Maryland games, including all three games in JHU's current three-game winning streak against the Terps.