Four Johns Hopkins faculty members have been elected as fellows of the American Association for the Advancement of Science, a lifetime distinction that recognizes their outstanding contributions to science and technology. 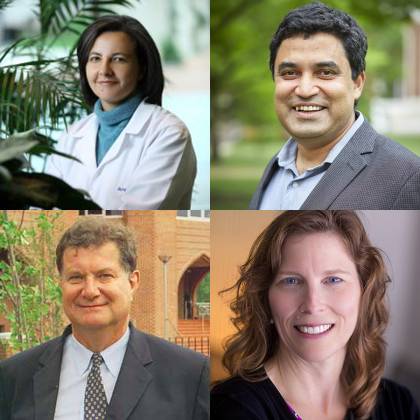 Fellows are elected each year by the member-run governing body of AAAS. The 2019 group, which includes 443 fellows, will receive official certificates and rosette pins during a ceremony in February.

The distinction is unrelated to the annual list of fellows announced each spring by the American Academy of Arts and Sciences.

The AAAS fellows from Johns Hopkins University and their areas of expertise are:

Armanios is a professor of oncology at the Johns Hopkins School of Medicine. Her research focuses on dysfunction of telomeres, the protective ends of chromosomes. When telomeres are abnormally short, it prevents cells from dividing effectively and contributes to the development of cancers and other syndromes such as dyskeratosis congenita, a premature aging syndrome. She is the clinical director of the Telomere Clinic at Johns Hopkins.

Gracias is a professor and director of graduate studies in the Department of Chemical and Biomolecular Engineering at the Whiting School of Engineering. His research focuses on the design, development, and characterization of miniaturized devices and intelligent materials and systems. At Johns Hopkins, he has collaborated extensively with clinicians to apply the capabilities of micro and nanotechnology to modern medicine. He was elected fellow for distinguished research contributions to three-dimensional micro and nanoscale assembly.

Norman is an astrophysicist in the Department of Physics and Astronomy in the Krieger School of Arts and Sciences and an astronomer in the Space Telescope Science Institute. He is the founding co-director of the Institute for Planets and Life, which combines the interdisciplinary expertise of scientists from Johns Hopkins University, the Johns Hopkins Applied Physics Laboratory, and the Space Telescope Science Institute. He specializes in the study of molecular clouds, star formation, plasma astrophysics, and the formation and structure of galaxies, among other fields.

Platz is a cancer epidemiologist and deputy chair of the Department of Epidemiology at the Bloomberg School of Public Health. She specializes in research on prostate and colon cancers and studies the association of genetic, epigenetic, and lifestyle factors that affect the incidence and recurrence of these cancers. She has co-led the Cancer Prevention and Control Program at the Sidney Kimmel Comprehensive Cancer Center at Johns Hopkins since 2008. 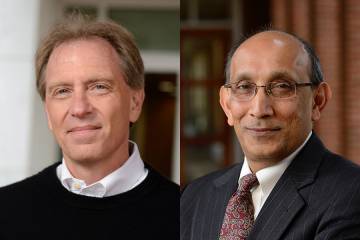 Two from Hopkins elected to AAAS

Published Nov 27, 2018
Gregory Hager and K.T. Ramesh are both faculty members in the Whiting School of Engineering