Seniors Maggie Coulson and Emily Maheras scored, and goalkeeper Caitlin Hendricks posted her fourth consecutive shutout to propel the Blue Jays to the NCAA third round 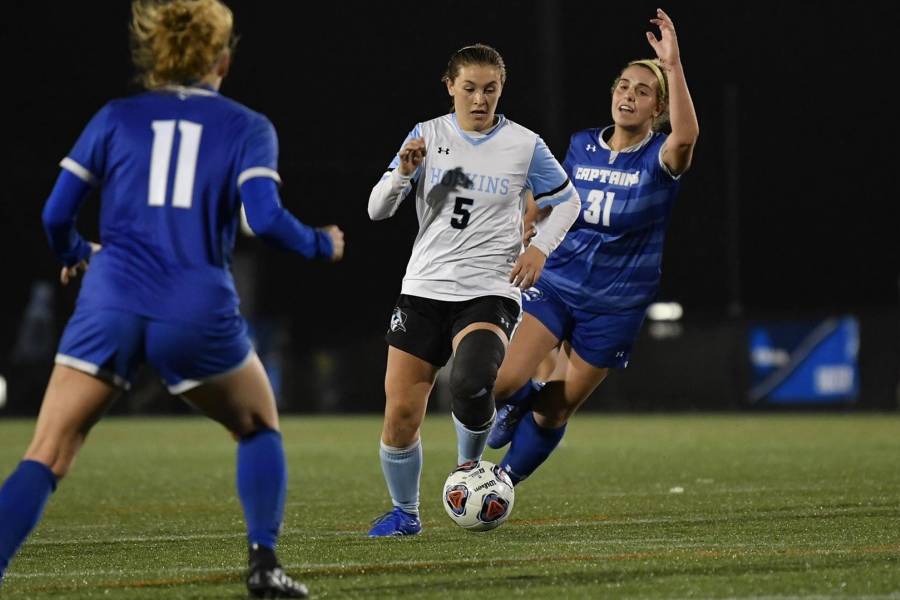 Image caption: Senior Maggie Coulson scored her fourth goal of the season to help Johns Hopkins to a 2-0 win against Christopher Newport in an NCAA tournament game played at Homewood Field.

The win sends the Blue Jays (16-2-4) to the NCAA round of 16 for the 10th time in program history. Hopkins will face Centennial Conference rival Dickinson in a third-round game. It will be the third meeting between the Blue Jays and Red Devils this season—the teams tied 2-2 during the regular season, and JHU scored a 2-0 win in the conference tournament final a week ago. Complete NCAA DIII women's soccer tournament bracket

Coulson got the scoring started, finding the back of the net from just outside the penalty box in the 24th minute. Seven minutes later, Maheras scored her team-best 16th goal of the season off a feed fro Maddy Rocks.

Johns Hopkins owned an 8-2 edge in shots on goal, and JHU goalkeeper Caitlin Hendricks made a pair of saves. Hendricks has posted four consecutive shutouts—a run that also includes a 2-0 first-round win against Penn State Berks on Friday—and has an active scoreless streak of 440 minutes.

Christopher Newport finished with a record of 16-4-2.