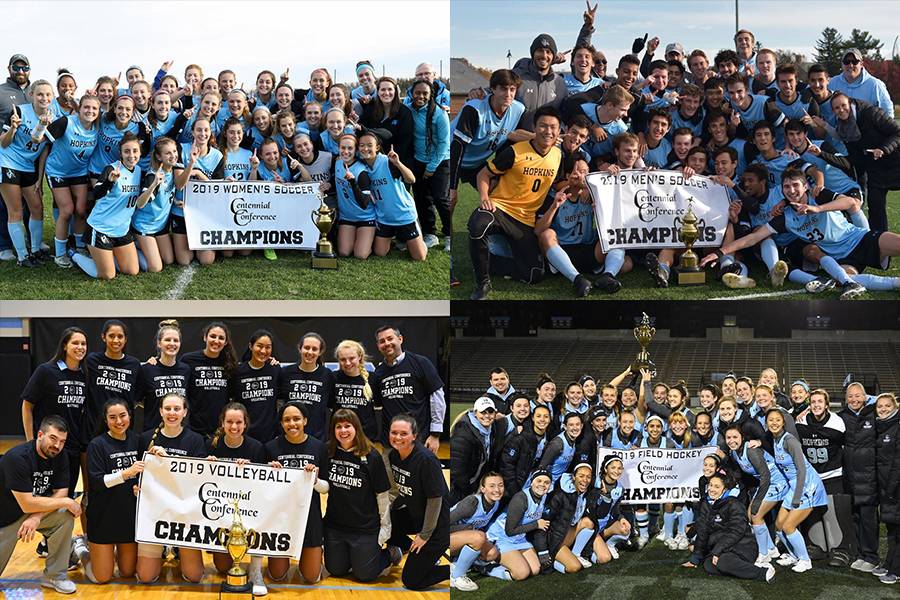 It was a banner weekend for Johns Hopkins athletics teams, which went a perfect four for four in winning Centennial Conference championships.

Michaela Corvi and Katie McErlean each scored a goal, and the No. 6 Blue Jays (17-2) held off No. 7 Franklin & Marshall (16-3) by a score of 2-1 in the conference championship game at Homewood Field. It marked the second consecutive league title for JHU, which will host NCAA tournament games beginning Saturday. Hopkins will face the winner of a game between Messiah and Worcester State. Complete NCAA Division III field hockey bracket

No. 6 Hopkins continued its record-breaking run, improving to 29-0 with a straight-set victory against Franklin & Marshall (26-24, 25-23, 25-20) in the conference final at JHU's Goldfarb Gym. Simone Bliss had 15 kills and 10 digs and was named tournament MVP for the Blue Jays, who have won four consecutive Centennial Conference titles. In 12 matches this season against Centennial Conference opponents this season, JHU did not lose a set. Hopkins awaits the pairings for the NCAA tournament, which will be announced on Monday afternoon.

Emily Maheras and Maggie Coulson scored first-half goals, and No. 12 Hopkins (14-2-4) hung on for a 2-0 victory against top-seeded and 11th-ranked Dickson in the conference final in Carlisle, Pennsylvania. Maheras, who also scored the lone goal in a 1-0 semifinal win against Haverford, was named tournament MVP. It marked the 12th Centennial Conference title for JHU, which will make its 15th consecutive NCAA tournament appearance, a streak that dates to 2005.

Third-ranked Johns Hopkins (16-2-1) erased a pair of one-goal deficits for a 3-2, come-from-behind win against the tournament's top seed and host Franklin & Marshall in Lancaster, Pennsylvania. Liam Creedon converted a penalty kick in the 62nd minute to tie the score at 2, and Alejandro Maclean netted the game-winner for the Blue Jays eight minutes later. Jake Kooyman scored a first-half goal for Hopkins and also assisted on Maclean's game-winner. NCAA tournament pairings will be announced today.