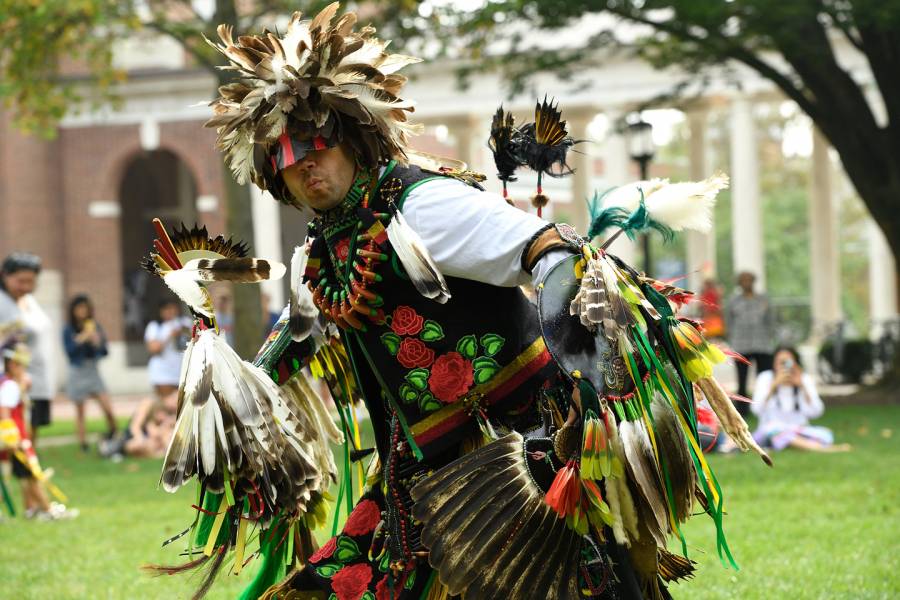 When Joshua Bertalotto arrived at Johns Hopkins as a first-year student in 2014, he knew his new life would require some adjustment. But he didn't realize how much he would miss the large Native community he was used to in Louisiana as a member of the Tunica-Biloxi tribe.

"It wasn't until it wasn't there that I realized that it felt like something was missing," said Bertalotto, who graduated in 2018 with a degree in sociology and public policy. "This sense of community is vital to us all."

To create that sense of community and continuity for other Native students, Bertalotto co-founded Indigenous Students at Hopkins, a group that aims to encourage the growth of the Native student population at Hopkins and to advocate for its needs. Today, the group will host the second Indigenous Peoples Day Pow Wow, an event that celebrates Native culture and vocalizes the group's mission.

"The experience of Native American and indigenous students is too often overlooked or not really explored," says Kwame Phillips, assistant director of programming for the university's Office of Multicultural Affairs. "This event is a way to learn more about what it means to be Native American from those who live that experience every day."

Bertalotto founded the group in 2016 with Ty Andrews, a senior majoring in public health. They were motivated by an invitation from JHU President Ronald J. Daniels to provide feedback on a draft version of the Roadmap on Diversity and Inclusion, which details the university's ongoing efforts to address race, diversity, and equity across the institution.

"I was super excited to see this document. I had been following along, and I decided I was going to read all 80 pages before I go and sit there and meet with the president," Bertalotto said. "Then I read it and realized there was no mention of Native students in that report, and it was, I guess, kind of a shocking moment."

Bertalotto voiced his concern to Daniels soon after the document's release, and university administration responded positively, he said.

In the past few years, the number of Native students has grown, topping 1% of the incoming class for the first time in 2017 and increasing to 3% American Indian and Alaskan Native students in the Class of 2023, which arrived on campus in August.

After speaking with Daniels, Bertalotto and Andrews began a Native students initiative focused on creating a space for Native students on campus, and by 2017, their effort led to the creation of an official student organization. Andrews said she hopes to build a support system for incoming Native students, something she felt was missing in her first year on campus. In addition to advocacy and community work, the Indigenous Students at Hopkins work to partner with the Native community in Baltimore. These partnerships are vital to help counteract a history of neglect of Native communities in the city, she said.

Indigenous Peoples Day was first proposed as an alternative to Columbus Day in 1989 in South Dakota as a way of replacing what was seen as a celebration of colonialism with an observance that acknowledges and affirms indigenous people in the Americas and their organization against injustice.

Today's Pow Wow takes place from 11:30 a.m. to 1:30 p.m. on Keyser Quad and will feature Native dancers, music, and food, as well as tables from local Native organizations from Hopkins and the Greater Baltimore community.

The event is co-sponsored by Hopkins' Center for American Indian Health, and opens with tribal music, tabling, and a food tasting from the Piscataway-owned catering company Copper Kitchen. It will then transition into a grand opening with tribal dancers and singers and a Pow Wow directed by Dennis Zotigh, a member of the Kiowa Gourd Clan and San Juan Pueblo Winter Clan and a writer and cultural specialist at the Smithsonian National Museum of the American Indian in Washington, D.C.

During the Pow Wow, intertribal dance groups and individuals will perform in traditional and modern styles. Andrews said she hopes people come out, have a good time, and take a moment to learn. According to Bertalotto, it's a chance for the community to learn a little bit about their values.

"We're a community that values culture, and values history, and values tradition," Bertalotto said. "This is an opportunity to bring people together who can talk about what that means for us, what being a Native student at Hopkins means to us all."