Alanna Shanahan, Kevin Shollenberger, and Jennifer Baker will take on new roles as the university devotes new resources to student health and well-being

As part of Johns Hopkins University's ongoing efforts to improve student well-being, three university leaders will take on new roles before the start of the 2019–20 academic year. 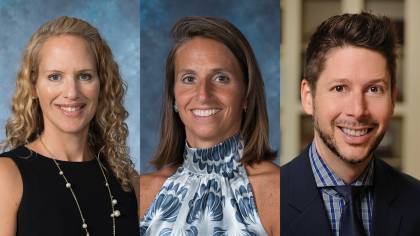 Shanahan, Shollenberger, and Baker will begin their new roles Aug. 12. Dean of Student Life Smita Ruzicka will continue to be the primary contact for Homewood students, serving as leadership liaison, and as a steward for diversity and inclusion, student engagement, residential life, student conduct, crisis management, and support services.

"These changes reflect a continuous challenge to ourselves to improve support for our students," says Provost Sunil Kumar. "They also provide us with an opportunity to recognize and promote leadership talent from within the organization."

As vice provost for student affairs, Shanahan will expand her ongoing efforts to engage students in meaningful ways. During her three-year tenure as director of athletics and recreation, she has worked to enhance the student experience and foster school spirit through a variety of initiatives both on and off the playing field. Working with the broader student affairs team, Shanahan has spearheaded numerous student-focused projects, including plans for the upcoming expansion of the O'Connor Recreation Center and the highly anticipated Hopkins Student Center, as well as serving as co-chair of the Homewood-Peabody Well-Being Working Group. She also led the Blue Jays to three consecutive top-10 finishes in the Learfield IMG College Directors' Cup, the annual ranking of athletic programs' competitive success

"My three years serving Hopkins Athletics and Recreation have been a privilege," Shanahan says. "I look forward to my expanded role and continuing the work of Kevin Shollenberger and his leadership team to support the learning and growth of our exceptional students. Strong partnership with students, faculty, and staff will help enhance the Hopkins experience for all members of our community."

Shanahan earned master's and doctoral degrees in higher education administration from the University of Pennsylvania's Graduate School of Education and went on to serve as the deputy director of athletics and senior woman's administrator. At Penn, she was appointed to numerous administrative committees focused on the student experience, including the Title IX Compliance Committee.

In his new role as vice provost for student health and well-being, Shollenberger will focus on student health priorities and will continue to provide oversight of Student Disability Services. He will be responsible for coordinating the university's current wellness, mental health, and primary care resources, moving them toward a more seamless universitywide model that removes barriers for students to access services and resources.

This increased attention to student well-being reflects the recommendations of the Task Force on Student Mental Health and Well-Being, a universitywide group convened by JHU President Ronald J. Daniels in 2016 to ensure that Johns Hopkins is aligned with national best practices to support the mental health and wellness needs of all students. As a trained counselor, Shollenberger is a passionate advocate and ideally suited for this new role within the Hopkins community, Kumar wrote in a message announcing the changes.

"Johns Hopkins University places the utmost importance on the wellness of our students, which is fundamental to both academic and personal growth," Shollenberger says. "We strive to foster an environment that empowers students to address their unique mental health and wellness needs, increases awareness about available supports, and offers an open dialogue about mental health."

Baker, who joined Hopkins in September 2017, will be Hopkins' fifth director of athletics and recreation since 1950. During her tenure, her duties have included overseeing the day-to-day operation of the Department of Athletics, directing revenue-generating initiatives, and short- and long-term budget planning for Johns Hopkins' highly successful 24-sport varsity athletic program.

"I'd like to thank Alanna Shanahan, Provost Kumar, and President Daniels for the opportunity to lead the storied and tradition-rich program that is Hopkins Athletics and Recreation," Baker says. "Johns Hopkins is a unique and special institution, and I am proud of the success of our athletic and recreational programs each and every day. It will be an honor to lead and to serve this department and continue to work under Alanna's leadership. I look forward to working alongside our campus partners as we advance our relentless pursuit of excellence, both in competition and in the classroom."

In addition to serving as the sport administrator for women's lacrosse, football, men's and women's basketball, and women's soccer, and providing administrative support for men's lacrosse, Baker recently led the search to fill Johns Hopkins' head football coaching position and has been actively involved in the hiring of other coaches and staff members. Among her notable initiatives at Johns Hopkins has been the launch of Blue Jays LEAD, a leadership development program for student athletes.

Baker spent three years at Cornell University, where she was associate director of athletics for facilities and founded the Big Red Leadership Institute. She graduated from the United States Naval Academy with a degree in aerospace engineering and was a member of the USNA's women's lacrosse team, which won a club national championship while she was a member. After graduation, Baker spent seven years in the Navy, including three years as a pilot and four as a construction manager and facilities engineer. She later earned an MBA and a master's in mechanical engineering from Cornell. Prior to Hopkins, Baker was senior manager of corporate real estate, facilities, and operations at Under Armour.

A Baltimore County native, Baker attended Hereford High School, where she was a member of the girl's lacrosse program. Several members of Baker's family are Hopkins alumni, including her father, David Dowell '66; her uncle, Brice Dowell '70; and grandfather, Robert Dowell '38.