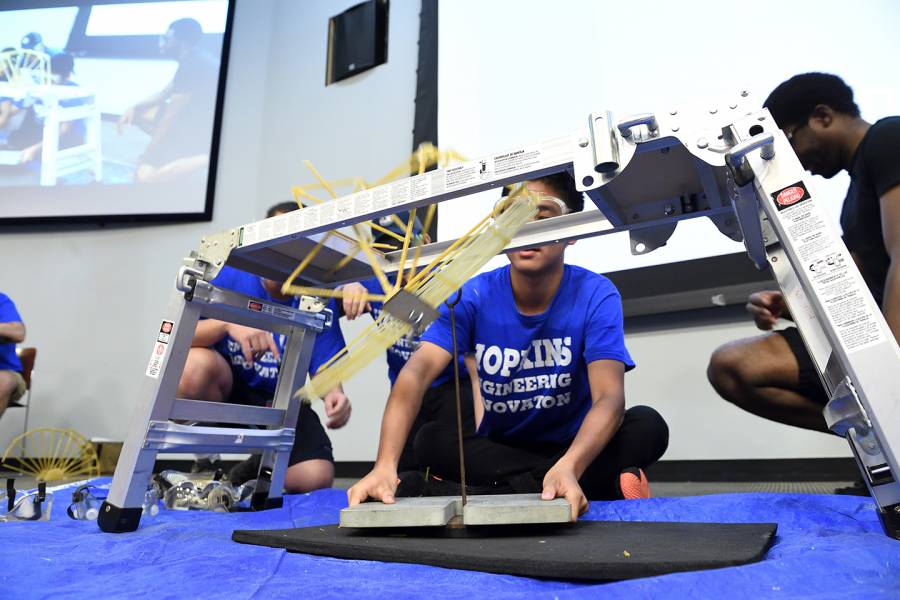 Hold the tomato sauce. Last week on the university's Homewood campus, high school engineering students served up their spaghetti with a big helping of glue.

The 11th annual Spaghetti Bridge Competition challenged participants in the four-week Johns Hopkins Engineering Innovation precollege program to design and construct the strongest possible miniature bridge out of only dry pasta and epoxy. On Friday morning, the students' families, faculty members, and staff gathered in Hodson Hall and Shaffer Hall to see which team's bridge could hold the most weight (added slowly, kilo by kilo) before shattering.

Offered by Whiting School of Engineering's Center for Educational Outreach, Engineering Innovation was held this summer at 15 sites from Maryland to California. The program's participants—rising high school juniors and seniors—attend college-level lectures, solve problems, test theories, and, ultimately, learn to think like engineers.

This year, more than 500 students took part across the country, with 189 students spending the summer at JHU.

Amy Wang, who traveled to Baltimore from Connecticut to attend the program, said she and her fellow team members were surprised by how challenging it was to build with something as simple as spaghetti.

"In our labs, we learned that spaghetti is stronger in tension and weaker in compression. For our bridge, we wanted all the beams in compression to be bigger and stronger. But working with sticky glue and dry spaghetti is not as easy as it seems—spaghetti is pretty unforgiving!" said Wang.

Update from the #JHUEI Bridge Breaking Day: Some of these spaghetti bridges are strong (final weight: 22kg). pic.twitter.com/RMvKZC3tGf

Working with the pasta certainly put all of the students' problem-solving skills to the test. Some bridge designs were tall and intricate; others were short and simple. Most students opted for a truss bridge design, which relies on connecting triangles to support heavy loads. While a few bridges collapsed as soon as the students attached the first weight, most bridges were able to support a considerable amount of weight, much to the crowd's amazement.

At the Homewood competition on Friday, Mohammad Al-Makhamil, Moayad Alsalhi, Thomas Kiely, and Eric Zhang of Team Piggiest Bard (an anagram for Spaghetti Bridge) emerged the victors, with their bridge holding an impressive weight of 46 kg, or 101 pounds.

Lyu attributed his team's success to a thoughtful design. "We did some research and decided to go with a circular arch design for our bridge. We thought this would take advantage of the tension capacity of spaghetti and avoid too much compression—otherwise, the whole thing will buckle," he said.

But once again, dry spaghetti proved to be an unreliable material. "We broke one of the beams right before the competition. If we hadn't, I think we may have been able to hold even more weight," said Lyu.

Though top honors and bragging rights go to members of the team whose bridge bears the most weight, the students also try to outdo each other by coming up with the catchiest team name, usually involving a pasta pun. Teams this year included "Alfredo Tornado," "The Saucy Posse," "Mission Impastable," and "Let's Spaghett-It."