Three Johns Hopkins researchers have received grants from the Human Frontier Science Program, an international organization dedicated to supporting the study of the complex mechanisms of living organisms:

Founded by a collective of scientists from around the world, the selective Human Frontier Science Program awards grants to international teams in an effort to "combine their expertise in innovative approaches to questions that could not be answered by individual laboratories." Since 1990, awards have been granted to more than 6,000 scientists from more than 70 countries, and 25 of these awardees have gone on to win the Nobel Prize.

The Hub caught up with these researchers to discuss their areas of study.

What the mosquito nose knows

To hungry mosquitoes, nothing smells better than their next meal, but their attraction to humans drops precipitously when they're full.

With the goal of stemming the spread of diseases like malaria, Diego Giraldo, a postdoctoral fellow at the Bloomberg School for Public Health, studies how the internal states of mosquitoes affects their olfactory response to humans. He hopes his research helps the development of new ways of discouraging mosquitoes from biting humans.

"If we understand what makes them want to find us, we can figure out how to develop tools that change their ability or willingness to find us," Giraldo said.

Giraldo, who works in assistant professor Conor McMeniman's lab in the Department of Molecular Microbiology and Immunology, aims to determine whether the presence of malaria parasites in a mosquito affects its attraction to humans. To that end, he and his team trace the brain sensory nerves of mosquitoes to determine how the smell of humans is coded in the brain.

This research may be used to help develop mosquito repellants and traps, utilizing these changes in their smell processing to attract or chase away the insect.

Piecing together the genetic code

Much like the 26-letter alphabet that forms the basis for more than 130 languages, the building blocks of life can be stripped down to just 20 amino acids. These amino acids create a wide array of complex proteins that make life as we know it possible.

There are more than 500 different amino acids, but only 20 are used in all living organisms, and Stephen Fried, an assistant professor of chemistry at Hopkins, is eager to learn how and why they made it into the genetic code.

Fried, along with collaborators from the Czech Republic and Japan, will tackle the question by combining different amino acids into "alternative genetic codes" in the lab and observing what proteins emerge. The Fried Lab at Johns Hopkins will carry out the first step in the endeavor: generating tools such as specially engineered biomolecules that are able to switch out amino acids.

"Could have life emerged if we used different building blocks, or are our building blocks truly special and we're lucky nature found them and used them?" wonders Fried. "The neat thing is that we can take such blue-sky ideas and actually test them by taking advantage of modern biochemical techniques."

Like birds, primates, and other insects (and even humans from time to time), mosquitoes attract mates through a courtship "dance."

For more than a century, scientists have studied the movements of the mating ritual of the mosquito and the distinctive sounds generated by its wings during its midair dance. But the scientific tools needed to gather detailed data about how these sounds are altered during courtship currently don't exist.

Mechanical engineer Rajat Mittal will lead a research effort to develop a first-of-its-kind flow-acoustic computational model that will simulate the generation, direction, and intensity of these wing-tones based on the experimental data provided by collaborators at the University of Greenwich in London who will study free-flying mosquitoes in a laboratory. The goal is to create and deploy a wide range of experimental and computational modeling tools to learn more about the insect's delicate dance and examine how mosquito swarms respond to external sounds.

Mittal hopes that the knowledge gathered from these studies will help researchers devise environmentally friendly strategies to disturb the flight and mating of mosquitoes, and to also design effective insecticidal and surveillance traps. 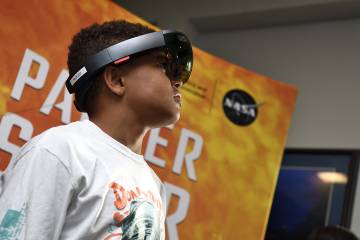 Published June 13, 2019
Researchers and scientists from across Johns Hopkins showcase their work to demonstrate importance of federal funding