A leading theoretical anthropologist, Das conducts research that intersects with fields such as philosophy, medicine, economics, and politics

Johns Hopkins anthropologist Veena Das has been elected to the prestigious Fellowship of the British Academy for the humanities and social sciences. 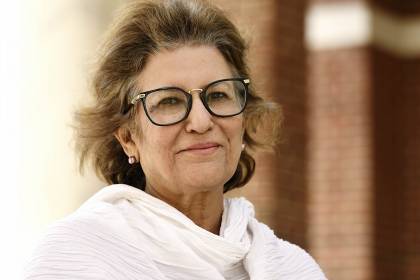 The British Academy described Das as "one of the most influential and productive of social anthropologists writing today." A professor in the Department of Anthropology in the Krieger School of Arts and Sciences, she was recognized by the organization for her wide-ranging and interdisciplinary theoretical work that touches on the intersection of anthropology with other fields such as philosophy, medicine, economics, and politics.

Das joined Johns Hopkins University in 2000. She is a fellow of the American Academy of Arts and Sciences and of the Academy of Scientists from Developing Countries. She was awarded a John Simon Guggenheim Fellowship in 2009.

The British Academy is a funding body for research and a forum for debate and engagement. Each year, up to 76 scholars who have achieved academic distinction in the humanities and social sciences are invited to join the Fellowship of the British Academy based on their scholarly research activity and publication. The community currently includes 1,400 world-leading scholars and researchers.

"The British Academy has always recognized pioneering research in the humanities and social sciences, and 2019 is no exception," said David Cannadine, president of the British Academy, in a news release announcing the new fellows. "This year we have elected a particularly multi-skilled and versatile cohort of Fellows whose research crosses conventional academic boundaries. ... Their work has opened rich new seams of understanding and discovery, offering new perspectives on long-standing and emerging challenges alike."