Ashani Weeraratna holds appointments in the Bloomberg School of Public Health, the School of Medicine, and the Sidney Kimmel Comprehensive Cancer Center at Johns Hopkins

In the world of cancer research, Ashani Weeraratna is known for making breakthroughs.

In 2002, for instance, a paper she co-wrote challenged some of the established beliefs about the signals that drive the spread of melanoma, the most dangerous form of skin cancer. The surprising findings from the study rattled many researchers in the field.

"I was a postdoc, and the signaling pathway we discovered played an unexpected role in cancer," she recalls. "But the data were there."

Later, Weeraratna's work led her down a path of cancer research that, despite its utmost relevance, remains underdeveloped: examining the role that aging plays. 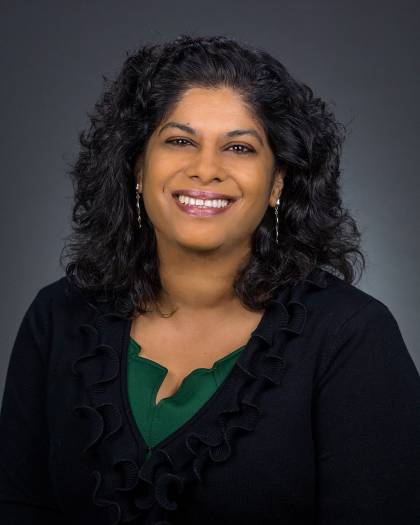 "Really, the number one prognostic factor for cancer is aging—and the cancer in older patients is often more aggressive and harder to treat. Yet only a handful of people around the world really work on this," she says. "It's been fascinating to explore this and discover all these new things."

In 2016, Weeraratna and her lab were the first to look at the role of aging microenvironments—the normal cells and structures surrounding a tumor—in driving metastasis.

Now, Weeraratna will join Johns Hopkins University as a Bloomberg Distinguished Professor of cancer biology. In addition to expanding her melanoma research, she plans to build a strong aging and cancer program within the Bloomberg School of Public Health, where she'll serve as the inaugural E.V. McCollum Professor and Chair of the Department of Biochemistry and Molecular Biology.

She will hold joint appointments in the School of Medicine's Department of Oncology and the Sidney Kimmel Comprehensive Cancer Center at Johns Hopkins.

For Weeraratna, coming to Johns Hopkins is "a natural returning home," she says. She started her medical career as a research technician in the Kimmel Center's oncology unit, and returned in 1998 for her postdoctoral fellowship in the Experimental Therapeutics and Pharmacology lab.

"We are delighted to welcome Dr. Weeraratna back to Hopkins as a Bloomberg Distinguished Professor and department chair at the Bloomberg School of Public Health," says Johns Hopkins Provost Sunil Kumar. "She is a renowned research scientist, particularly known for her work at the intersection of cancer and aging, and will bring tremendous value to the Department of Biochemistry and Molecular Biology and the university.'

Weeraratna takes on her new role after eight years with the Wistar Institute, an international leader in biomedical research. Most recently, she was co-leader of its Immunology, Microenvironment, and Metastasis Program. Next year, she will become president of the Society of Melanoma Research, which recognized her as Young Investigator of the Year in 2006.

Born in Sri Lanka and raised in Lesotho in southern Africa, Weeraratna, who goes by "Ashi," took an interest in cancer research from a young age. She came to the U.S. in 1988 to pursue those ambitions, studying biology at St. Mary's College of Maryland before earning her PhD in molecular and cellular oncology at George Washington University.

After her postdoctoral work at Hopkins, Weeraratna landed at NIH, as a scientist in the National Human Genome Research Institute. She worked with Jeffrey Trent, whose lab had just identified the Wnt-5a protein as being upregulated in melanoma—a significant discovery for the field.

"When I got there, he said, 'Hey, figure out what this does,'" Weeraratna recalls.

The first decade of her lab work, she says, was devoted to understanding Wnt-5A's role in driving metastasis: activating signals on cells that made them leave the primary tumor site and colonize distant organs, resist therapy, and evade the immune system.

Weeraratna moved next to NIH's National Institutes on Aging, heading its cancer biology unit. Though her specialty remained melanoma, here she began to advance her research on aging and cancer.

"I couldn't help but be influenced by the fact that all of my colleagues worked on aging," she says.

At the Wistar Institute, Weeraratna's lab focused on both specialties. "It's one of the best places in the world to do melanoma research, and this is also where my work on aging and cancer truly blossomed," she says.

Her work in melanoma prevention includes a public health approach. For example, she helped lead a campaign to introduce sunblock dispensers throughout Philadelphia and talk to elementary, middle, and high school children about the dangers of tanning.

"We're delighted to welcome Ashani to the Bloomberg School," says Dean Ellen J. MacKenzie. "She's exactly the type of leader we need: a lab scientist with deep experience, and a strong, visionary advocate for public health."

Adds Paul B. Rothman, dean of the Johns Hopkins School of Medicine and CEO of Johns Hopkins Medicine, "Dr. Weeraratna is a groundbreaking researcher, exploring crucial questions about cancer and aging. She is an ideal addition to our broad Johns Hopkins effort to better understand how cancer develops, how we can prevent it, and how we can vanquish it once it appears. We are all excited to have her back in Baltimore."