Two Johns Hopkins undergraduate students have been named Astronaut Scholars in recognition of their promise in science, technology, engineering, and mathematics. 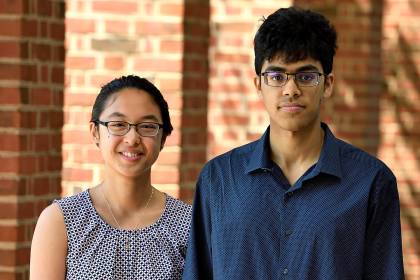 Recipients of the award are given a $10,000 scholarship, a paid trip to the Astronaut Scholarship Foundation's Innovators Weekend in the fall, and the opportunity to network with fellow scholar alumni and with the founding astronauts themselves.

Le said it's the opportunity to connect with the Astronaut Scholar community that excites her most about the award.

"There is so much support and expertise there," Le said. "I'm looking forward to meeting people in my cohort and see where other scholars have ended up. I want to see if I can play that role for people moving forward."

Le has been working in a Johns Hopkins research lab since her sophomore year of high school. While attending Baltimore Polytechnic Institute, she was able to join Erika Matunis' lab at the School of Medicine, studying stem cell competition in the Drosophila melanogaster testis. In the lab, she seeks to understand how genetic mutations cause competition and may affect the rate in which older fathers pass on genetic disorders to their children.

Le said having the opportunity to stick with this lab through high school and her undergraduate experience has helped her grow as a researcher and a scientist. Starting in the fall, she aims to apply to graduate programs with a goal of pursuing a biophysics PhD.

This is Ayyappan's second year in a row receiving the Astronaut Scholarship. He said he was excited and astonished to be named again.

"It's incredibly humbling," Ayyappan said. "The competition is so fierce, that to be selected again is an honor."

During his time at Hopkins, Ayyappan has worked on the molecular imaging of cancer and helped develop biomedical devices to improve breast biopsy procedures in low-resource settings.

Ayyappan said he is currently most interested in imaging and systems biology, and is looking to pursue his MD and PhD following graduation.

Students interested in applying for the Astronaut Scholarship and other nationally competitive scholarships can contact the National Fellowships Program for more information.