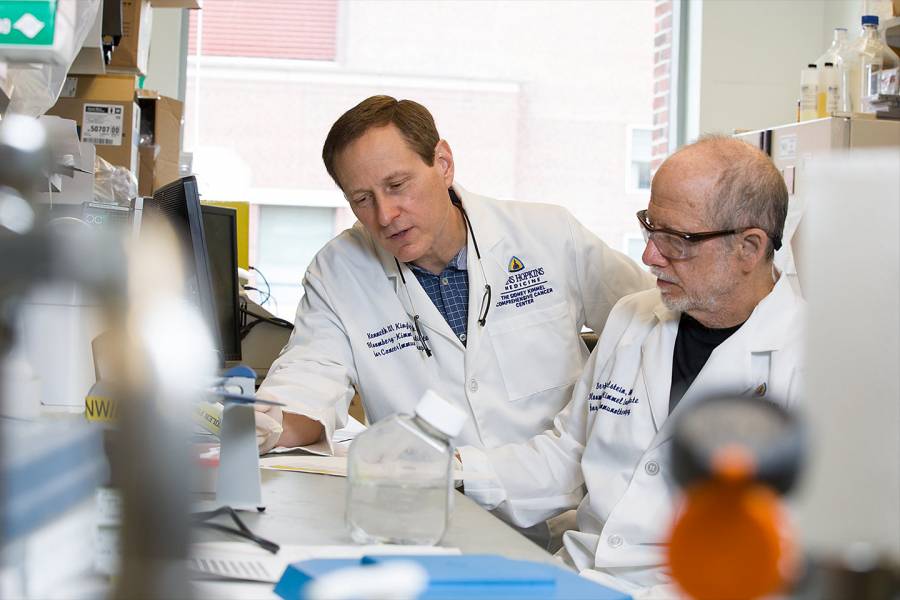 Image caption: Kenneth W. Kinzler (left) and Bert Vogelstein are two of the inventors of CancerSEEK.

CancerSEEK, pioneered at Johns Hopkins, will be developed by Thrive Earlier Detection Corp., a new company that launched last week with $110M in Series A funding

A pioneering blood test developed by Johns Hopkins researchers that makes cancer detection a part of routine medical care has received the largest Series A investment ever for a Johns Hopkins-licensed technology.

The test, CancerSEEK, is a liquid biopsy test designed to detect multiple cancer types at earlier stages of the disease. It will be developed by Thrive Earlier Detection Corp., a new company that launched last week with $110 million in Series A funding. Third Rock Ventures, a Boston-based health care venture firm, led the financing.

Thrive will have offices in Massachusetts and Baltimore and will conduct its research and development at the 1812 Ashland building, part of Johns Hopkins' innovation hub on the East Baltimore campus. The company will initially will have 25 employees and occupy 18,000 square feet of office space in Baltimore.

"This is a milestone moment in the development of Johns Hopkins' biotech ecosystem."
Christy Wyskiel
Johns Hopkins Technology Ventures

Alongside the CancerSEEK technology, Johns Hopkins also has licensed to Thrive a foundational DNA sequencing technology, Safe-SeqS, and a suite of supporting biomarker technologies.

"This is a milestone moment in the development of Johns Hopkins' biotech ecosystem," said Christy Wyskiel, head of Johns Hopkins Technology Ventures, the division of the university that licenses technology and supports university startups. "Johns Hopkins researchers are at the forefront of advancements in cancer screening technology, making Baltimore fertile ground for the commercialization of these discoveries into products that revolutionize health care."

CancerSEEK is designed to be used in routine medical care with the goal of identifying multiple cancer types at earlier stages, complementing colonoscopy, mammography, and other screening tools. To support physicians and patients in acting upon the results of the test, Thrive aims to offer an integrated service that provides support in result interpretation, confirmatory diagnostic testing, and guidance for additional clinical care where appropriate.

Thrive also plans to draw upon demographic and phenotypic information, historical clinical data, radiology and pathology imaging, behavioral data, information from retrospective clinical studies of relevant cohorts, among other sources, to create a learning loop that fine-tunes test performance and expands the number of people who can benefit from earlier cancer screening over time. 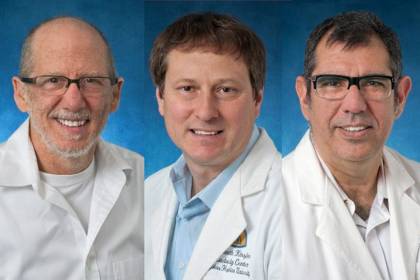 "Over the past 30 years we have made great strides in understanding how cancer works. Now, by combining this knowledge with the latest in molecular testing technologies, it has been possible to develop a simple blood test for the detection of many cancers at relatively early stages," said Bert Vogelstein, professor of oncology in the Johns Hopkins Sidney Kimmel Comprehensive Cancer Center who is one of the inventors of CancerSEEK and Thrive's scientific co-founder. "We envision a future where routine preventive care includes a blood test for cancer, just as patients are now routinely tested for early stages of heart disease. Such testing does not have to be a scary, expensive, or complicated process. We know that if cancer is caught early enough, it often can be cured."

Other inventors of CancerSEEK from the Kimmel Cancer Center include Kenneth W. Kinzler, a professor of oncology and co-director of the Ludwig Center at Johns Hopkins with Vogelstein; and Nickolas Papadopoulos, an expert in cancer diagnostics and professor of oncology and pathology. Kinzler, Papadopoulos, and Vogelstein are among the founders of Personal Genome Diagnostics, or PGDx, another Johns Hopkins spinoff that provides advanced genome testing products and services.

CancerSEEK interrogates genomic mutations in circulating tumor DNA and cancer-associated protein markers in plasma to identify abnormalities that are common across multiple cancers. CancerSEEK has received Breakthrough Device designation from the U.S. Food and Drug Administration for the detection of genetic mutations and proteins associated with pancreatic and ovarian cancers.

In a retrospective study of multiple cancer types published in Science in 2018, CancerSEEK was shown to perform with greater than 99% specificity and with sensitivities ranging from 69% to 98% for the detection of five cancer types—ovarian, liver, stomach, pancreas, and esophageal—for which there are no screening tests available for average-risk individuals.

"The Johns Hopkins Sidney Kimmel Comprehensive Cancer Center has been a leader in cancer research and treatment for more than 45 years," said Paul Rothman, CEO of Johns Hopkins Medicine and vice president for medicine of The Johns Hopkins University. "I am excited to see the work of our researchers has been affirmed by this opportunity, which hopefully will lead to more breakthroughs in cancer care."

A prospective study of CancerSEEK in healthy individuals, the DETECT study, is already under way to better understand its performance and how to implement its findings in patient care. The study is led by investigators at the Johns Hopkins University School of Medicine, in partnership with Geisinger and Thrive. Study enrollment is complete and the data are being analyzed. 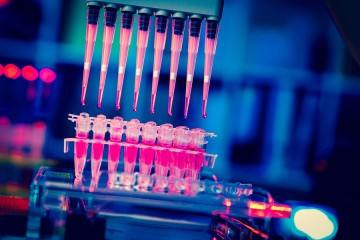 Published Jan 19, 2018
CancerSEEK is a noninvasive test that can detect cancers of the ovary, liver, stomach, pancreas, esophagus, colorectum, lung, or breast