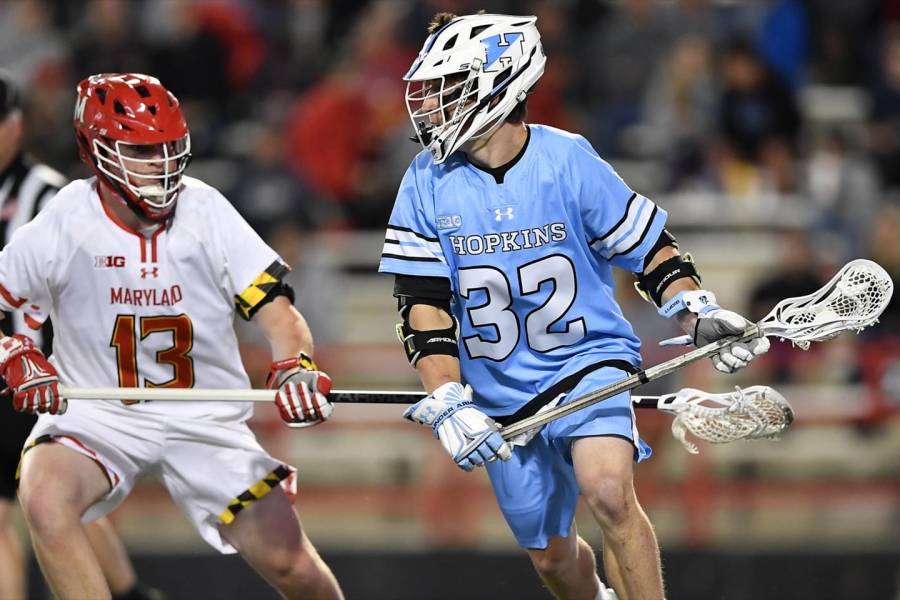 Image caption: Johns Hopkins attackman Joey Epstein, who led the Blue Jays with 35 goals and 18 assists during the regular season, is the first freshman in league history to be named to the Big Ten Conference's first team.

Three members of the Johns Hopkins University men's lacrosse team received all-Big Ten Conference recognition on Tuesday, including first-year attackman, who was a first-team honoree and a unanimous selection as the league's freshman of the year.

Epstein became the first freshman in league history to earn first-team all-conference honors, and he is the second Johns Hopkins player to be named Big Ten freshman of the year, joining Joel Tinney, who was recognized in 2015. Through 13 games, Epstein leads the Blue Jays in goals (35) and assists (18) and has registered at least two points in 12 of 13 games thus far. His 35 goals are just two shy of the JHU single-season record for a freshman, and his 53 points are just eight away from the rookie record.

Foley, who routinely draws the assignment of covering the opposition's top attackman, has totaled one goal, three assists, 20 ground balls, and a team-high 12 caused turnovers this season. This is the second consecutive season that he has earned second-team all-conference recognition.

Williams, also a repeat second-team selection, ranks third on the team in goals (20) and second in assists (15). In five Big Ten games this season, he has 12 goals and four assists.

Hopkins (7-6) earned the No. 2 seed in the upcoming Big Ten tournament and faces third-seeded Maryland on Thursday night at 7:30 p.m. in Piscataway, New Jersey. Top-seeded Penn State meets host Rutgers in the first semifinal at 5 p.m., and the winners will square off Saturday at 7 p.m. in the conference championship game.