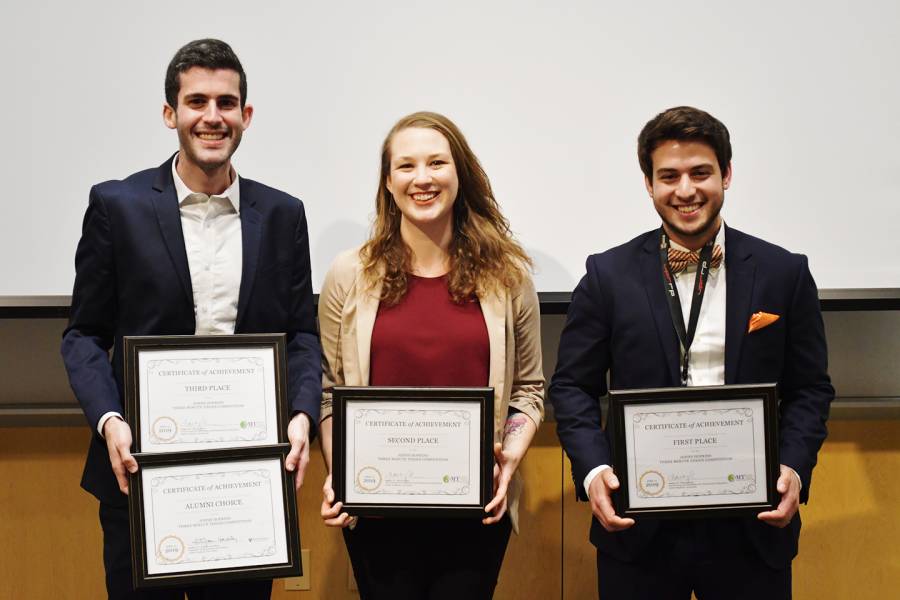 Three minutes is just enough time to listen to a pop song, cook an egg, or brush your teeth.

But is it enough time to sum up your life's work?

That's what 32 Johns Hopkins doctoral students had to do in the university's fourth annual Three-Minute Thesis competition.

The event, originally conceived at the University of Queensland in Australia, asks PhD students to sum up their theses for an intelligent but nonspecialist audience, in just three minutes. The students who are able to do so most succinctly and compellingly walk away with a cash prize.

The field of 32 was narrowed down during preliminaries to a group of 12 finalists who competed in front of both live and livestream-watching audiences as well as a panel of six judges, including Johns Hopkins faculty, alumni, and last year's winner.

Organizer Kate Bradford said this year the competition saw an increased level of participation from across the university. The 12 finalists represented six of JHU's eight doctorate-granting schools.

Eduardo Martinez-Montes, who studies biochemistry and cellular and molecular biology at the Johns Hopkins School of Medicine, took home the $1,000 first-place prize for his presentation, "The Lazy Librarian." 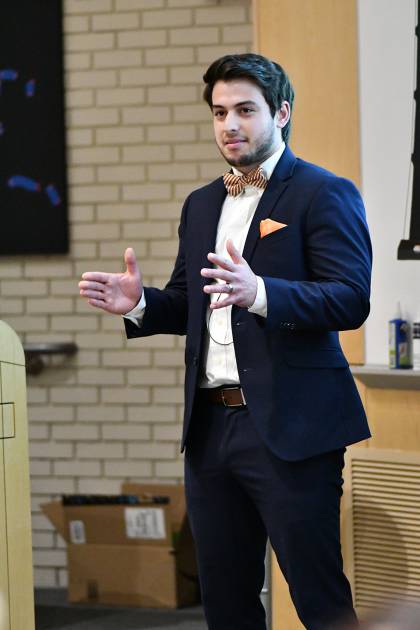 Rather than summing up his work dryly, Martinez-Montes used an extended metaphor, comparing the body's DNA to a library, and his field of epigenetics to the ways the library is organized. From that grounding, he introduced the audience to acute myeloid leukemia, or, as he described the disease, The Lazy Librarian.

"I've always liked stories," Martinez-Montes said. "That's one of the reasons I liked science, because we get to discover and tell stories, and it seemed like an elegant way of putting that into action."

Second place went to Katie Overbey, who studies environmental health and engineering at the Johns Hopkins Bloomberg School of Public Health. Overbey said she spent weeks running her presentation, "Application of Novel Laboratory Methods to Identify Infectious Norovirus in the Environment," by her boyfriend and her roommate to make sure the information was digestible.

"It's really hard, because you're so into your own research, and you think every little detail is so important," Overbey said. "To take a step back and figure out what's actually important is hard."

"A lot of people are out there doing really impactful, cutting-edge research, and unfortunately a lot of times it ends up tucked away in a journal somewhere. We need to be able to advocate for our work in order for it to have an impact."
Ben Ackerman
PhD student, biostatistics

Ben Ackerman, a biostatistics student at the Bloomberg School, earned third place for his presentation "Clinical Trials: How Do Their Results Translate to the Real World." He also took home the contest's first Alumni Award, voted on by more than 250 viewers of the Three-Minute Thesis livestream on the Johns Hopkins Alumni Association's Facebook feed.

Ackerman said he wanted to prove that even a complex topic like statistics can be made accessible for a general audience. His first draft, however, was full of statistical jargon. With each pass he took at his presentation, he cut out specialized language until he was left with a presentation that was accessible to all.

"A lot of people are out there doing really impactful, cutting-edge research, and unfortunately a lot of times it ends up tucked away in a journal somewhere," Ackerman said. "We need to be able to advocate for our work in order for it to have an impact."

Jarrett Venezia, who studies molecular macrobiology and immunology at the Bloomberg School, took home the People's Choice award for his presentation "Why Do Good Macrophages Go Bad?"