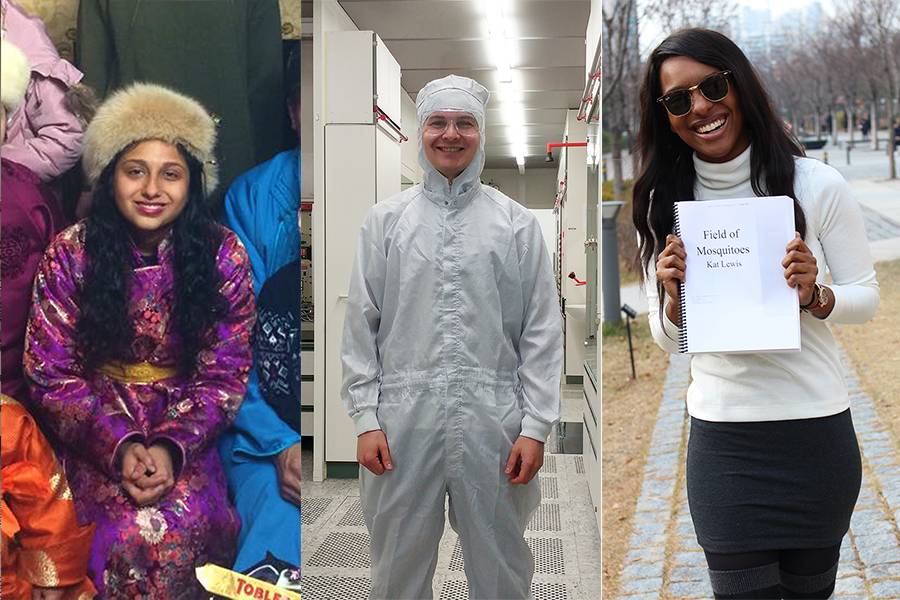 Image caption: From left to right: Mallika Iyer, Alex Kossak, and Katherine Lewis have spent the past school year working on projects in locations outside the U.S.

Quantum physics in Germany, novel writing in South Korea, and teaching English in Mongolia—these are some of the projects Johns Hopkins scholars are undertaking this year as part of the Fulbright U.S. Student Program, the government's flagship international educational exchange program.

During the 2018-19 Fulbrights cycle, Johns Hopkins University sent 15 current students and recent graduates to locales around the world for a variety of research, study, and teaching experiences.

Hopkins ranked among the nation's top producers of Fulbright students during the 2018-19 cycle, according to an annual report published by The Chronicle of Higher Education, and has been a top producer for the past nine years. JHU currently ranks 11th for the ratio of applicants to winners and is tied for 23rd in terms of the number of grants awarded among research institutions.

Since its start in 1946, the Fulbright Program has selected more than 390,000 participants based on academic merit and leadership potential and provided them with the opportunity to exchange ideas and work on solutions to shared international concerns.

Johns Hopkins plans to announce its next round of Fulbright winners in May, and the university's National Fellowships Program is hosting a series of information sessions this month for the upcoming application cycle. Prospective U.S. citizen applicants—undergraduates with degrees by August 2020, graduate students, and alumni—must submit their intent forms by May 12 (for Homewood, Peabody, and the School of Education) or June 10 (for East Baltimore and SAIS).

The Hub caught up with three recent JHU grads who are currently completing their U.S. Fulbright Programs abroad. They shared updates via email on their projects and cultural experiences.

Under the Fulbright English Teaching Assistant program, Iyer is spending her year working with high school and university students just outside of Mongolia's capital city, Ulaanbaatar. She teaches two or three 90-minute classes each day in English grammar and conversation skills and hosts one-on-one sessions for students who want extra practice. 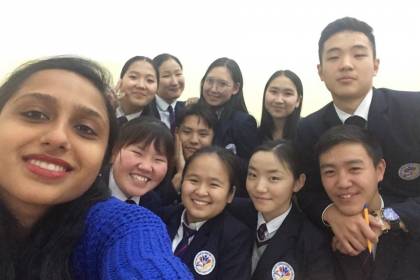 Image caption: Mallika Iyer takes a selfie with her students

Outside of work, Iyer says she likes to hang out with new friends in Ulaanbaatar's coffee shops and karaoke bars. She's also traveled beyond the urbanized capital into more remote and untouched parts of the country.

"I have gotten really into horseback riding, which is an integral part of the culture and a great way to take in Mongolia's stunning landscapes," she writes. "I've also spent a lot of time traveling to different parts of Mongolia and staying in gers [yurts] with local families."

Iyer, who graduated from Hopkins last May with degrees in public health and history, plans to pursue her master's next year in social and behavioral interventions at JHU's Bloomberg School of Public Health.

The most important lesson she's learned during her Fulbright experience? "Roll with the punches! Don't over-predict," Iyer says. "I have planned a 90-minute lesson that the students finished in 20 minutes. I've taken a couple of strange countryside detours. The best form of being prepared is to just prepare yourself that anything can happen."

Kossak is based in Stuttgart, Germany, this year at the Max Planck Institute of Solid State Research, where he spends his days working in the lab with 2-D quantum materials and attending seminars by scientists and professors from around the world. 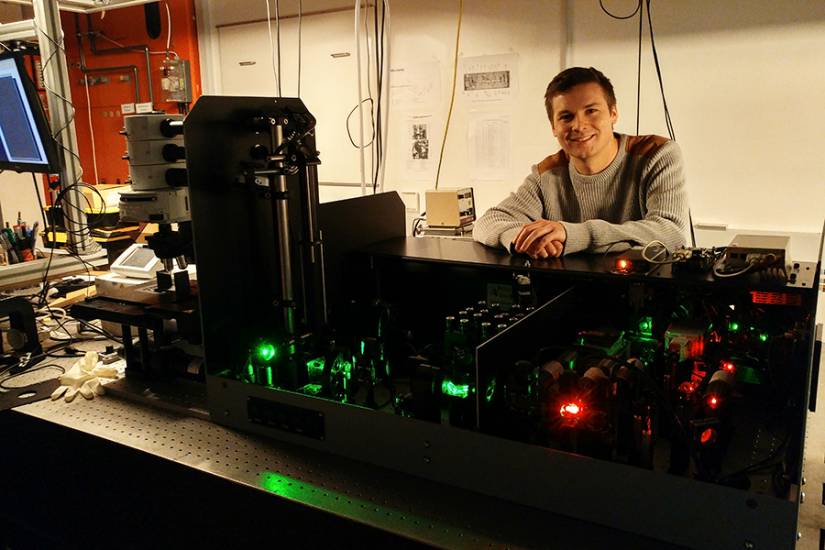 He says the cultural transition to Germany has been relatively smooth, given its similarities to the U.S., though he's had to adjust to a new type of Sunday: most stores are closed, and everyone takes a break from work that day. "The work-life balance in Germany is much better than in the U.S.," Kossak writes, "which does wonders for your mental health."

Kossak is conducting his research under a Fulbright Study/Research grant in physics, in between earning his bachelor's and master's in chemistry and materials science from Hopkins and starting a PhD program in materials science at MIT next year.

In Stuttgart, Kossak says, he's immersed himself in collaborative work with scientists from all types of backgrounds.

"Our department is home to people from Korea to Indonesia to Israel to Costa Rica and beyond, and it's when you bring all of these people together that you can truly look at a problem from all angles," he writes. "Together, we can help each other solve the current challenges in research and answer the endless questions in science."

Lewis, who earned her bachelor's degree in JHU's Writing Seminars, is currently spending her days in Seoul, writing her first novel under a Fulbright Study/Research grant in the creative arts. 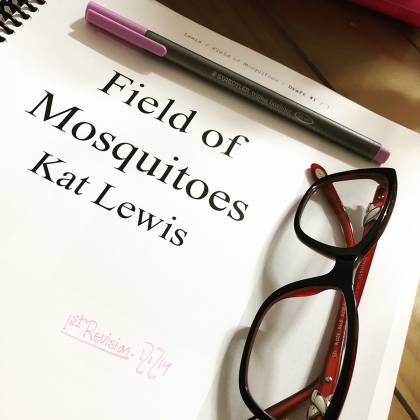 She describes her novel, Field of Mosquitos, as "a dark thriller" integrating themes of Korean folklore and centered on a black film student studying abroad in Seoul.

Lewis says she's learned that "immersion really is the best way to improve language skills," though she still makes some embarrassing mistakes with her Korean: "For instance, I once meant to text a friend 'I'm sorry,' but I misspelled a word and actually said, 'I'm a rat.' We had a good laugh about that, and these little details related to speaking a second language have been great experiences to write about in my novel."

Culturally, Lewis says she's had to adjust to her conspicuousness as an African-American woman in South Korea: "I get stared at a lot, and people frequently take photos of me without asking permission." Early on, she learned that wearing sunglasses out in public helped lessen that attention.

When she's not writing and research, Lewis likes to go for runs in Gyeongui Line Forest Park or visit Seoul's high-tech movie theaters, which "project the scenes around you so that your whole visual field, including your periphery, is completely immersed in the film," she writes. "The theater did this when I saw Aquaman, and I really felt like I was there under the water with the characters."

Next year, Lewis plans to continue her novel while in the MFA program at the University of San Francisco.

For more information on the Fulbright program and how to apply, visit the university's National Fellowship Programs website.