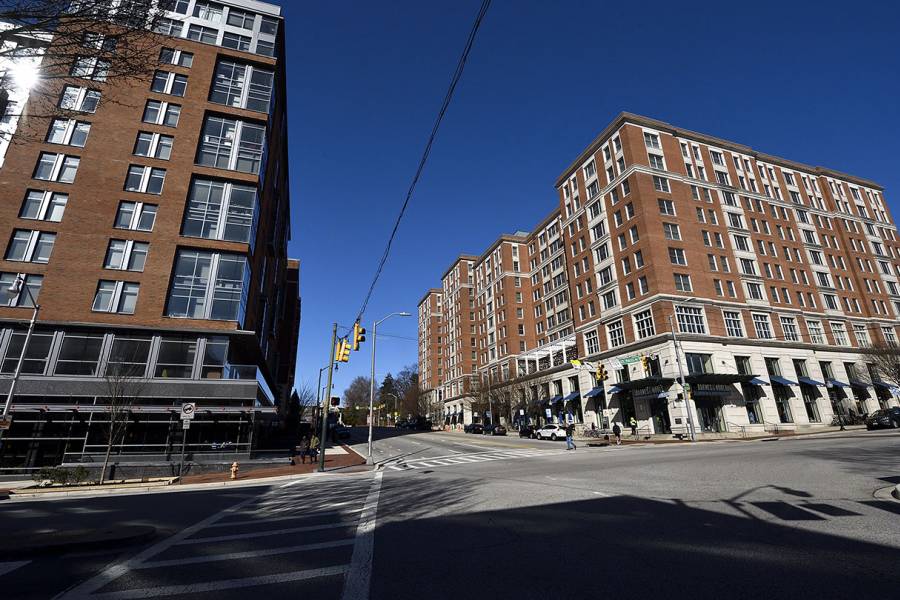 Image caption: The intersection of St. Paul Street and 33rd Street in Charles Village will get a facelift as part of a streetscape project near Johns Hopkins University's Homewood campus.

Johns Hopkins University will begin construction this week along a two-block stretch of St. Paul Street near the university's Homewood campus, the first steps of a multifaceted streetscape project designed to transform part of the Charles Village corridor into a vibrant, walkable retail district.

Between now and December, streetscape and landscape improvements are planned along St. Paul Street from 31st to 33rd streets, and along 33rd Street from St. Paul to Charles streets. Walking and bike paths will be introduced in raised medians down the center of 33rd, creating an attractive, shaded corridor connecting the Homewood campus to shopping and restaurants in neighboring Charles Village.

"We are very excited to begin this important project in coordination with the community, local businesses, and the city," said Bob McLean, JHU's vice president for facilities and real estate. "Not only do we expect to improve safety for our students, community residents, and visitors, but the streetscape will help further identify Charles Village as a distinctive destination."

Image caption: An artist's rendering shows a new median with a walking and biking path on 33rd Street between St. Paul and Charles streets, near the east entrance to the university's Homewood campus.

The project is expected to enhance pedestrian safety along St. Paul and 33rd streets in the heavily-trafficked area near the university's east entrance. Sidewalks will remain open and businesses will be accessible while construction is ongoing.

The St. Paul streetscape project is the culmination of a multiyear coordination effort by the university with community groups and local businesses, as well as the Baltimore City Department of Transportation. It represents the latest investment in the Charles Village community by Johns Hopkins and its public and private partners. Previous projects include a $28 million reconstruction of North Charles Street, completed in 2014, and the construction of the Nine East 33rd building, which features restaurants, student housing, and retail.

In addition to the new walking and bicycle paths, planned improvements include:

Additionally, traffic lanes will be modified and new traffic signals will be installed, and bus stops will be temporarily relocated:

For detailed construction plans of all five phases of the streetscape project, including lane closures and guides to available parking, visit the Facilities and Real Estate website.