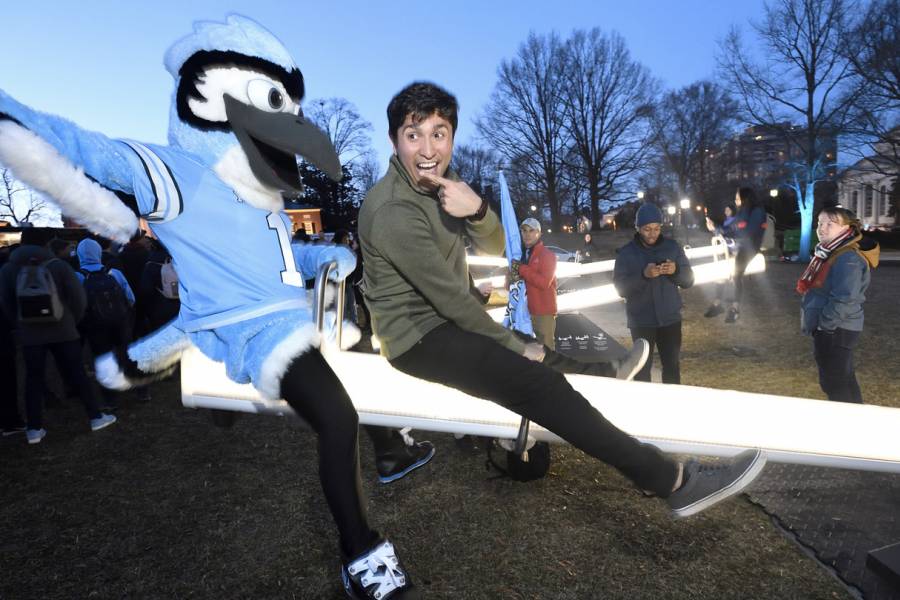 Long-sought social space for Johns Hopkins students will be built at intersection of Charles and 33rd streets, is expected to be completed by end of summer 2024

But none of those spaces has satisfied the need for a true student center, a nonacademic, campus social space for students. That point has been clearly and repeatedly echoed by generations of Hopkins students who have sought—as an April 2018 op-ed in the student newspaper titled "We need a student center" put it—a place to "promote social life at Hopkins, boost school spirit, and encourage campus activities beyond the classroom."

At long last, the wait for such a space is over.

On Tuesday night, at a special event held on the Beach, JHU President Ronald J. Daniels announced to a crowd of several hundreds students that the university intends to move forward with plans to build a student center at Homewood. The facility, made possible through fundraising and generous philanthropic support, will be a home for all Hopkins students, tailored to their needs and shaped by their input.

"As the needs of our student body have evolved, so has the desire for a different and dedicated student center taken hold," Daniels wrote in a message to the Hopkins community Tuesday night. "This will be a new kind of space for us—one that is not academically focused, but entirely social by design. … It will be a site to which everyone lays equal claim and from which everyone benefits."

The future student center will be situated at the intersection of 33rd and Charles streets—an area that includes the current location of the Mattin Center—and serve as a welcoming entrance to the Homewood campus. The new building will seek to keep alive the spirit of creativity made possible by the many donors—including Christina Mattin, a 1976 Hopkins graduate—who supported the center's creation in 2001 as a home for the visual and performing arts on campus.

The location was selected based on the flow of students on and off campus from the Charles Street corridor and on its proximity to the heart of Homewood activity, including the Beach and campus libraries. Initial estimates suggest that the project could be completed by the end of summer 2024.

"I'm very excited about the impact this facility will have on the student experience," said Kevin Shollenberger, vice provost for student affairs. "The addition of a university student center to the Homewood campus will serve as a game-changer for our students, who have long noted the need for a space that promotes relaxation, socialization, and interaction with friends outside of studying."

Efforts to establish a student center at Johns Hopkins are nearly as old as the university itself. In 1884, 25 undergraduates noted the need for a place to gather that wasn't academically oriented. Baltimore banker and future university trustee Eugene Levering donated the funds for the building, which became the original Levering Hall.

But by 1916, the university had picked up and relocated to the Homewood property, leaving Levering Hall behind. The building now known as Merrick Barn, a 19th-century dairy barn, was home to a barber shop and snack bar and served as the main campus hangout from 1916 until 1929.

The present-day Levering Hall operated as a campus branch of the YMCA from 1929 until 1969, when it was purchased by the university and turned into a student union. Over the years it has expanded to include dining options and event spaces, including the Arellano Theater and the adjoining Glass Pavilion, which opened in 1974. But the student body quickly outgrew those spaces, and calls for a multipurpose student center persisted.

"I think the student center is really going to revolutionize student life at Hopkins. I think it will be a platform for creating a more positive culture around mental health, diversity and inclusion, civic engagement, and so much more."
AJ Tsang
Hopkins senior, SGA president

A 2003 report by the university's first Commission on Undergraduate Education recommended developing "campus facilities to support the need for informal, social interaction as well as for group study." In a 2011 survey, undergraduate students who were asked to rank needs on the Homewood campus overwhelmingly identified a student center as their No. 1 priority.

Beginning in 2014, the university worked with an architectural firm on a feasibility study and preliminary concept design, a process that included two student focus groups. The findings reinforced the need for a student center on campus and confirmed the Mattin Center area as the best location.

"It's so inspiring to see an entire century of student advocacy and SGA advocacy culminate in this incredible moment," said senior AJ Tsang, executive president of JHU's Student Government Association and a vocal supporter of efforts to build a student center on the campus.

"It's so exciting, too, because I think the student center is really going to revolutionize student life at Hopkins. I think it will be a platform for creating a more positive culture around mental health, diversity and inclusion, civic engagement, and so much more. And I really hope it will be an inclusive and accessible space where students from all across Hopkins can come together and celebrate what it means to be a Blue Jay."

Added Lauren Paulet, a sophomore international studies major who has also been among those advocating for a student center: "Hopkins doesn't currently have as many spaces for students to get away from academics and dedicate time to ourselves. We should have a time and a space reserved for academics and other spaces available for student organizations to come together, because those organizations are what really unify us."

As for what shape the new student center will take and what it will contain, those determinations will be made with input from the university community, including students. An advisory committee with student members will play a key role in the multiyear process, Daniels said. This effort will be led by Alanna Shanahan, director of Athletics and Recreation, who will work closely with the Student Affairs and Facilities teams.

More information will be shared this spring about ways in which students can stay informed, provide feedback, and get involved.

"We are truly grateful to the many generations of students—including this one—who have advocated for such a space," Daniels wrote in his universitywide message. "Today, you can say that your legacy, your gift, has been not only to add your voices to that call, but to have had that call answered."