The U.S. government is quietly funding controversial scientific research to create airborne versions of highly infectious diseases, and the results of an experimental accident could be catastrophic, two public health researchers write in an op-ed published by The Washington Post today.

Tom Inglesby, director of the Center for Health Security at the Johns Hopkins Bloomberg School of Public Health, joins Harvard epidemiologist Marc Lipsitch in condemning research to enhance strains of bird flu to make the disease transmissible by air. Similar research previously sparked a public outcry and was discontinued in 2014. Officials at that time imposed a moratorium on such research until studies could be approved by a specially created review board to consider the dangers.

This month, Science independently confirmed with the National Institutes of Health that funding had been approved for two studies, one conducted in the U.S. and one conducted in the Netherlands, that aim to enhance forms of bird flu. No additional information has been made public regarding the studies, the researchers involved, or the process that was or wasn't in place to review them.

"Amazingly, despite the potential public-health consequences of such work, neither the approval nor the deliberations or judgments that supported it were announced publicly," Inglesby and Lipsitch write. "The government confirmed them only when a reporter learned about them through non-official channels."

They add that this kind of research is "not ordinary science." Rather, they argue, these studies have the potential to create pandemic pathogens that could infect millions of people with a dangerous virus. Although the majority of scientific experiments are safe, Inglesby and Lipsitch suggest that the risks in this case outweigh the potential benefits for society.

We have serious doubts about whether these experiments should be conducted at all. We also suspect that few members of the public would find compelling the rationale that the best way to fight the flu is to create the most contagious, lethal virus possible in a lab. But with deliberations kept behind closed doors, none of us will have the opportunity to understand how the government arrived at these decisions or to judge the rigor and integrity of that process. 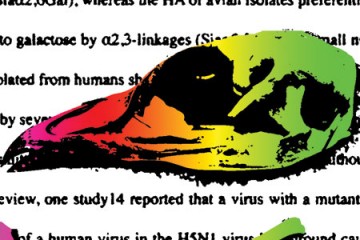 Published Winter 2012
Publishing scientific research might prevent the next pandemic, but critical information could fall into the wrong hands / Johns Hopkins Magazine