Supporters, opponents of legislation that would allow Johns Hopkins to establish a university police department head to Annapolis for hearings

Supporters and opponents of a bill that would authorize Johns Hopkins University to establish its own police department are in Annapolis today for public hearings on the issue in front of Maryland legislative committees.

The legislation, the Community Safety and Strengthening Act, is designed to improve safety on and around the university's Baltimore campuses and was introduced during the current General Assembly session by state Sen. Antonio Hayes and Del. Cheryl D. Glenn, both of Baltimore. The bill would authorize Johns Hopkins to replace its current contingent of armed off-duty Baltimore police officers with sworn university police officers in response to community input. It also proposes new funding for initiatives and programs designed to strengthen communities in Baltimore and across the state.

Dozens of supporters and opponents are expected to offer testimony in Annapolis, and many more are expected to submit letters to the committees. A diverse group of university, health system, and community leaders, as well as Hopkins students and faculty members will testify in support.

JHU President Ronald J. Daniels will testify that the legislation will enhance safety and security at the university's campuses in Baltimore, contribute to public safety for the city as a whole, and bring resources to community development, youth engagement, and economic opportunity efforts, including with matching funds from Johns Hopkins.

"This comprehensive approach to public safety will strengthen our communities while also upholding the highest standards of transparent, constitutional, community-based and publicly accountable policing," his prepared remarks say.

Several prominent current and former leaders from Baltimore have spoken out in favor of the bill, including Maryland Congressman Elijah Cummings, former Baltimore mayor and current University of Baltimore President Kurt Schmoke, and Kweisi Mfume, a five-term Baltimore congressman and former president of the NAACP.

Mfume submitted a letter of support for the bill to committee members ahead of the hearings, noting that "violent crime in our city has risen to staggering heights." Mfume adds that the legislation requires the JHU police department to go further than police departments at Baltimore's other universities by "requiring a Hopkins police department to be held to greater public accountability and oversight standards than any other law enforcement agency in the state."

Garrett Patrick, a third-year MD-PhD student at the School of Medicine, will be among those in Annapolis speaking in favor of the bill today. He said he's seen an uptick in robberies and other types of crime in his neighborhood adjacent to the university's East Baltimore campus—crimes he says could be more effectively dealt with by a university police department.

Patrick started an online petition late Wednesday for medical students to voice support for the legislation; by Thursday afternoon, it had been signed by about 115 people.

"I've received more than two dozen emails from people thanking me for starting this petition," said Patrick, who also sent a letter in support of the bill to committee members with signatures from 20 residents of his East Baltimore neighborhood.

Those who oppose the legislation will also be represented at today's committee hearings. Students Against Private Police plans to send a group to Annapolis to speak out against the bill, a contingent that includes undergraduate and graduate students, and also members of the community. The coalition of more than a dozen Hopkins student organizations has also collected more than 30 written testimonies opposing the legislation and expects to receive more, according to a representative of the group.

In a statement issued following the introduction of the bill earlier this month, the group says the proposed police department would "inherently lack accountability," "likely increase harm to marginalized communities," and "lack residents' and students' support."

Those concerns are echoed in an open letter opposing the university's efforts to establish a police department that was signed by more than 100 Hopkins faculty members. The letter says that the proposed introduction of armed police officers on campus could "decrease public safety, endanger our own students, and increase risk."

Mary Jo Salter, professor and director of undergraduate studies in JHU's Writing Seminars program, said she shares the concerns of other faculty members about the presence of guns on campus, but also counts herself as a supporter of the legislation.

"I respect the reasoning of those who oppose the new force," she said, "but I do think the process has been democratic. Views have been solicited on campus, and it is ultimately Maryland legislators who will vote on the bill."

The university's efforts to create a small, publicly accountable police department follow months of campus and community discussions about how to respond to an increase in crime both citywide and near JHU's campuses. The bill proposes three layers of community oversight and numerous public reporting requirements, a response to the desire for transparency and accountability conveyed during many of those conversations.

The conversations were part of a wide-ranging effort to hear from students, faculty, staff, community members, and city leaders about their concerns with safety; evaluate different models for university-based policing; and gather feedback on ways to reduce crime on campus and in neighboring communities. That effort included more than 125 meetings with various stakeholder groups, a public discussion series during the fall semester that featured local and national experts, and open community forums.

Those efforts led to the submission of an interim study report, published in December, which presents findings from the university's research and community engagement. It recommends creating a small, university-based police department to replace the current contingent of armed, off-duty Baltimore City police officers and sheriff's deputies who form part of the university's security operation near its Homewood and East Baltimore campuses.

When fully staffed after three to five years, the proposed Hopkins police department would be made up of about 100 people, including approximately 65 fully sworn officers who would be trained and certified to carry firearms in the course of their duties, just like the other university police departments in Baltimore. The officers would receive additional training on de-escalation techniques, crisis response, and racial profiling prevention, among other critical skills, as outlined in the interim study report and the draft bill. The majority of the security personnel at the university—about 1,000 people—would remain unarmed. 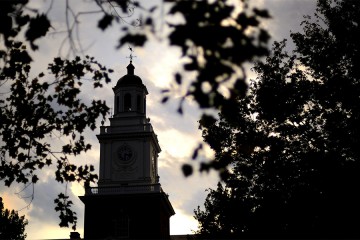