A stirring tribute to the power of voices at annual Martin Luther King Jr. Commemoration 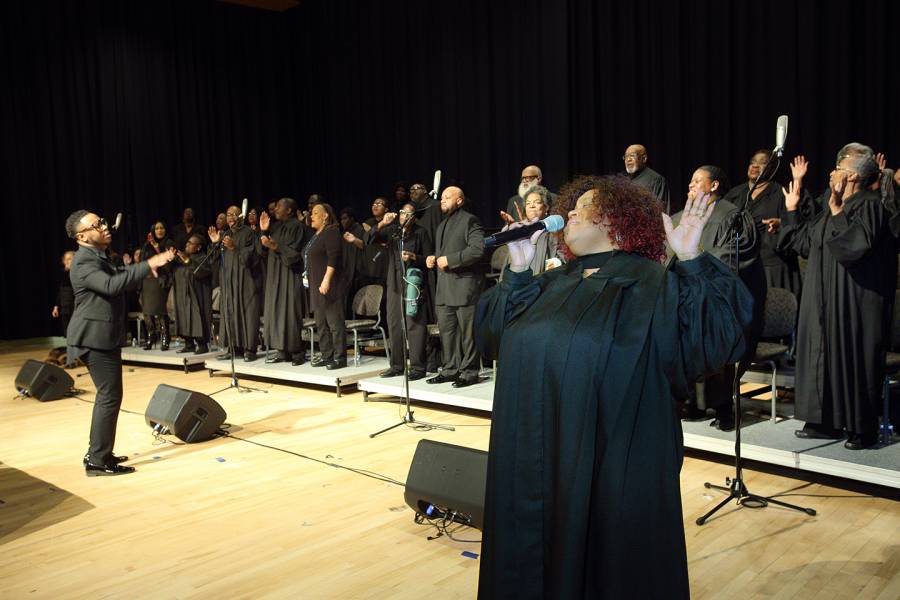 The choir, now in its 25th year, opened with Hezekiah Walker's "I Feel Your Spirit" and ended with the civil rights protest anthem "We Shall Overcome," imbuing the space with a spirit of unity and togetherness, and of shared history.

It was a fitting start to an event for which the theme was "Celebrating the Power of Voices." When the choir—made up of Johns Hopkins employees and Baltimore residents—sang a rendition of "How Excellent Is Thy Name" for a musical interlude, their energetic performance inspired members of the audience to join in. An encore refrain earned a standing ovation.

"There is absolutely no other place you can go to get this kind of music for 25 years," said master of ceremonies Kenneth Grant, who retired as vice president for general services at Johns Hopkins Hospital this month. 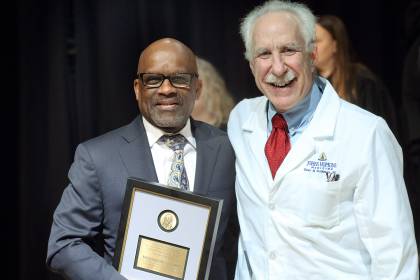 The annual commemoration event, held on the university's East Baltimore campus, celebrates the legacy of Martin Luther King Jr. and the spirit of service at Johns Hopkins. The event was founded by Levi Watkins Jr., a dedicated civil rights advocate and the first black chief resident of cardiac surgery at Johns Hopkins Hospital. He made medical history by implanting the first automatic heart defibrillator in a patient in 1980. Watkins died in 2015 at age 70.

During the commemoration, eight recipients of the Martin Luther King Jr. Community Service Awards were recognized for their outstanding contributions assisting people in need.

"I think we would all agree that if we would just pause and listen to the many voices that are crying out for help and put in place the many ways in which Dr. King has taught us to display our humanity, there is no doubt that the change we seek and so desperately need would be realized," Grant said.

In his keynote address, Derrick Johnson, president and CEO of the NAACP, spoke about how voices have the power to lift people up. He described a tribe in Africa in which members greet each other by acknowledging the divine spirit within one another and recognizing the power of the other person's voice. 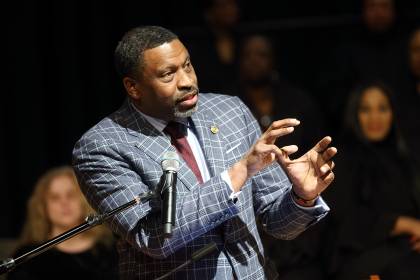 But Johnson also spoke of the eroded state of American civil discourse and the ways in which voices can be used to stoke bias and promote injustice.

To conclude the event, the Levi Watkins Jr. Ideals Award, which recognizes an individual who exemplifies the life and teachings of Martin Luther King Jr., was given to Gregory Branch, who co-founded Unified Voices and has served as the choir's director for 25 years. The award was also presented to Grant, who has helped organize the Martin Luther King Jr. Commemoration since 1993. 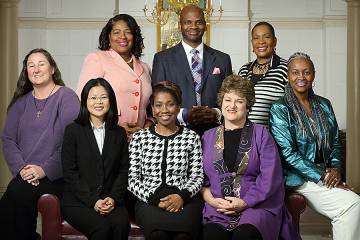