Forster, a board member since 2009, will succeed Jeff Aronson on July 1

Louis J. Forster's connections with Johns Hopkins span four decades—as an undergraduate and graduate student; a leadership volunteer throughout the institution, including the university board of trustees; a philanthropic supporter of faculty innovation; and the proud parent of a recent alumnus and a current junior in the university's Krieger School of Arts and Sciences. 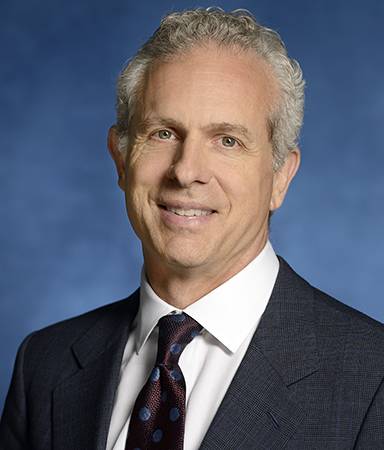 Forster is poised to take on a new commitment to his alma mater in 2019. He has been elected as the 17th chair of the university's board of trustees and will begin a six-year term on July 1. Forster will succeed Jeffrey H. Aronson, who will remain on the board.

"I am thrilled to have the trust and confidence of the board of trustees," Forster says. "We have a dedicated and committed board of incredibly able people."

The Johns Hopkins board of trustees, originally formed in 1867, has fiduciary responsibility for advancing JHU's mission and goals through wise stewardship of all of its resources for the common good and for generations to come. The board also guards the university's integrity and reputation, ensuring that it fulfills the purposes for which it was established.

Forster earned a bachelor's degree in international studies from Johns Hopkins in 1982 and a master's degree from the School of Advanced International Studies in 1983. He holds a law degree from Harvard University.

First elected to the university's board in 2009, he became vice chair in 2015 and has served on almost every one of the board's 12 committees. He is currently on seven committees, including Student Life, which focuses on the quality and substance of students' experience beyond academics, and Finance, which he has chaired for the past six years.

Forster is the parent of current and former Blue Jays: his son David graduated in 2014, and his daughter Julia is a member of the Class of 2020.

"Lou is an unflagging champion of his alma mater, and the idea of a university embodied by Johns Hopkins to transform lives through, as Lou likes to say, its seemingly perpetual power of discovery," said Ronald J. Daniels, president of Johns Hopkins University. "I look forward to working with him as he builds on the foundation of forward-thinking stewardship of our great university, exemplified by his immediate predecessors, Jeff Aronson and Pam Flaherty."

"I am delighted that the board unanimously elected Lou to be the next chair of this amazing institution," said Aronson, who began his six-year term as board chair in 2013. "He cares deeply about Johns Hopkins and its people and will bring to this role his many strengths, from strategic thinking to financial acumen, and, most importantly, his warmth and collegiality."

Forster has been a partner for the past four years of Green Visor Capital, a venture capital fund management business focused on financial technologies. Prior to taking his position at Green Visor, he was a partner and senior managing director of Cerberus Capital, where he worked for 16 years, primarily in Tokyo. Earlier, he was a managing director and partner at Angelo, Gordon & Co. He began his career at Goldman Sachs.

Tagged board of trustees