1982 Hopkins graduate led the Blue Jays to 221 wins over his 29 seasons as head coach, was named national DIII coach of the year in 2018 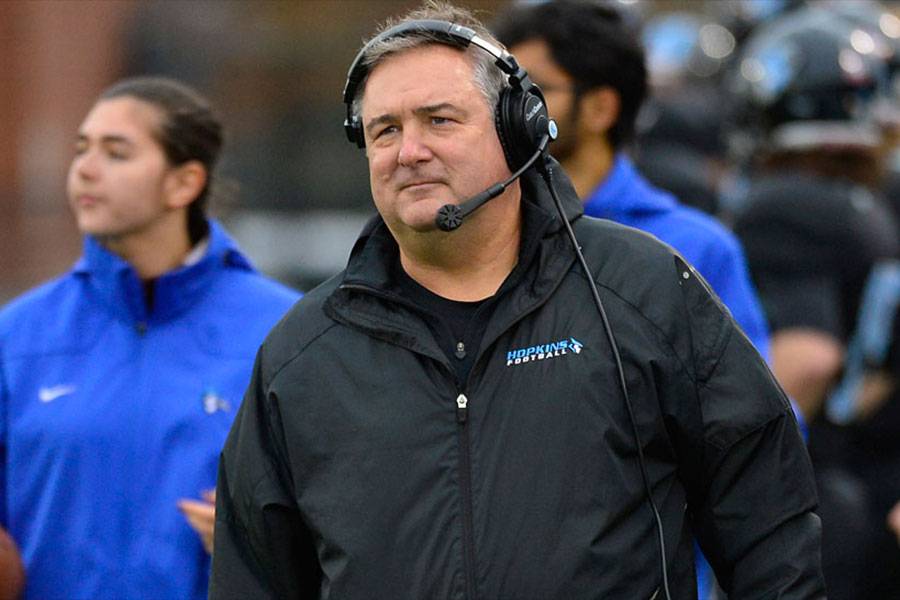 Jim Margraff, the winningest football coach in Johns Hopkins University history and a widely admired leader who was named the 2018 D3football.com National Coach of the Year last month, died suddenly at his Baltimore-area home earlier today. He was 58.

Margraff, a former Hopkins quarterback who served as head coach at his alma mater for 29 years, died less than one month after guiding the Blue Jays to the NCAA Division III semifinals for the first time in school history and winning a program-record 12 games.

"[Jim Margraff] left an indelible impact on all he touched, and he made us all better. We will forever be thankful for the unparalleled experiences he provided for so many over the course of his highly successful career."
Alanna Shanahan
Director of Athletics and Recreation

"Jim Margraff was a thoughtful, humble, passionate, and exceptionally talented leader, and our thoughts and prayers are with his family and friends at this difficult time," Johns Hopkins Athletics Director Alanna Shanahan said. "He left an indelible impact on all he touched, and he made us all better. We will forever be thankful for the unparalleled experiences he provided for so many over the course of his highly successful career."

Margraff's 221 wins are the most in school and Maryland state history and also ranked third among active Division III head coaches at the end of the 2018 season. In addition to being named the D3football.com Coach of the Year in 2018, he received the AFCA's Region 2 Coach of the Year and is a nominee for that organization's National Coach of the Year honor.

Margraff gradually built the Blue Jays into one of the most formidable and most consistent Division III football programs in the country. Over the past decade, JHU has won 10 consecutive Centennial Conference championships and has participated in the NCAA playoffs in nine of the past 10 seasons.

As a player, Margraff was JHU's starting quarterback for four seasons, from 1978 to 1981, and finished his playing career as the Blue Jays' all-time leader in pass attempts, pass completions, passing yardage, and touchdown passes. As a co-captain during his senior year, he helped lead Hopkins to a 7-2 record, matching the school's all-time record for wins in a season at the time.

He was inducted into the Johns Hopkins Athletic Hall of Fame in 1997.

Jim Margraff will be honored at an on-campus memorial service at 5 p.m. on Saturday, Jan. 26, in the O'Connor Recreation Center on the university's Homewood campus. Members of the Margraff family will greet guests beginning at 3:30 p.m. Parking will be available at various campus locations.