'Be bold,' the 41st U.S. president told students at university's undergraduate diploma ceremony on May 22, 1996 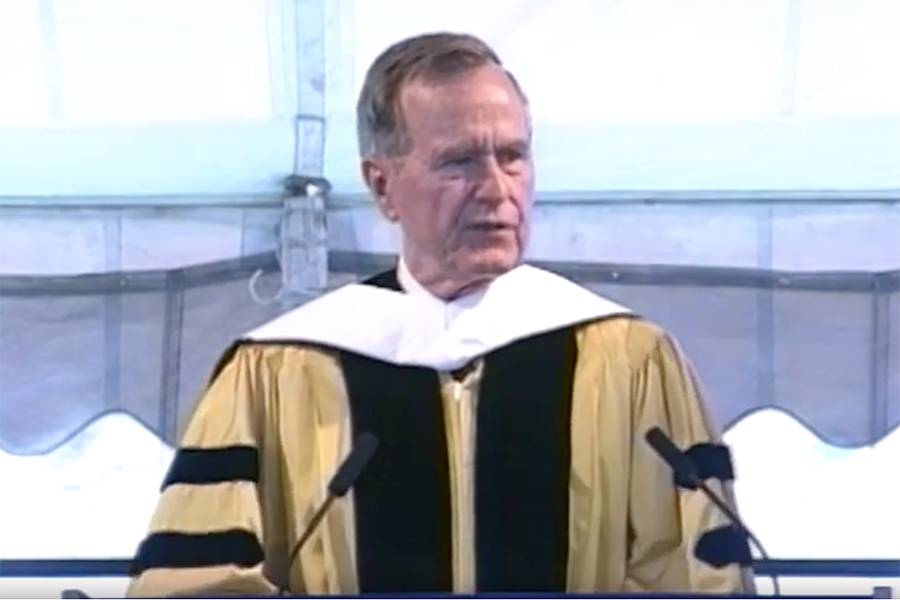 On a sunlit day on the Keyser Quad, former President George H.W. Bush—then just two and a half years out of office—spoke at Johns Hopkins University's 1996 undergraduate diploma ceremony about what he had learned during a lifetime of public service.

At the May 22, 1996, event, Bush spoke in support of the ideals of individualism, risk-taking, and dreaming about your own future. But he said it's the "neighbor helping neighbor" spirit that "made this country the kindest and the gentlest and the strongest in the world.

"No exercise is better for the human heart than reaching down and lifting someone else up, and to serve others, to enrich your community. This truly defines a successful life," Bush said. "For success is personal and it is charitable, and it is the sum not of our possessions, but of how we help others."

Bush, who received an honorary degree from Johns Hopkins in 1990, spoke about the impact of the end of the Cold War and his optimism for the future of the country before leaving attendees with these words:

Bush, the nation's 41st president, died Friday at his home in Houston. He was 94.

A state funeral will be held at the National Cathedral in Washington, D.C., at 11 a.m. today. A funeral service will be held Thursday at St. Martin's Episcopal Church in Houston, and the former president will be buried at his presidential library in College Station, Texas, after a private ceremony later in the afternoon.