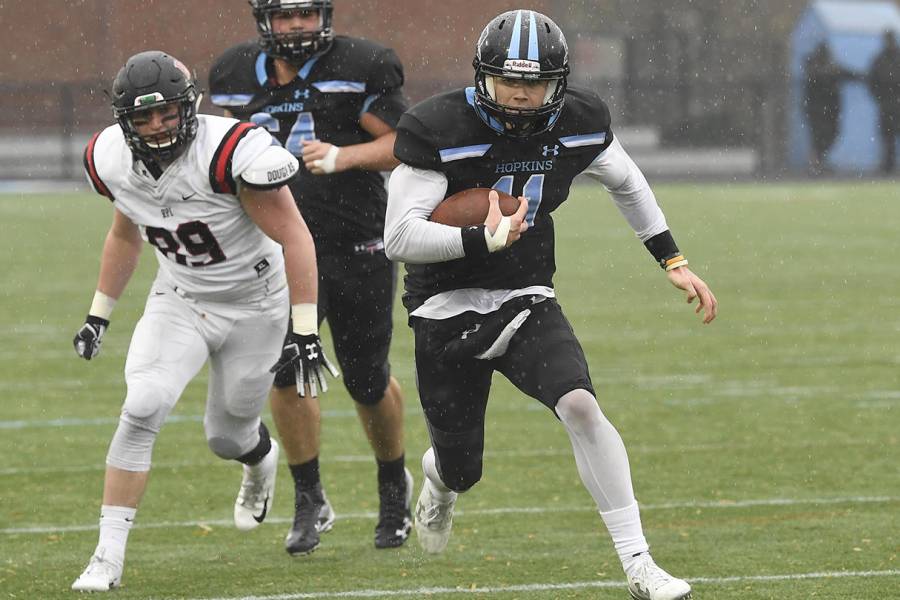 Image caption: Johns Hopkins QB David Tammaro ran for 81 yards and passed for 284 yards in a 37-14 win against RPI in an NCAA Division III playoffs quarterfinal.

The Blue Jays reach the 12-win mark for the first time ever with a 37-14 victory against RPI, advance to face top-ranked Mount Union

For the first time in the history of the program, the Johns Hopkins football team is headed in the semifinal round of the NCAA Division III playoffs.

The Blue Jays (12-1) punched their ticket with a methodical 37-14 win against RPI on Saturday afternoon at Homewood Field in a game in which Hopkins never trailed.

JHU advanced to face top-ranked Mount Union (13-0) on Saturday in Alliance, Ohio, at noon. The Purple Raiders have played in 19 of the past 22 Division III finals, winning 12, and own the longest winning streak in college football at 28 games.

Wisconsin–Whitewater and Mary Hardin–Baylor square off in the other semifinal, with the winners meeting on Dec. 14 in the Stagg Bowl in Shenandoah, Texas. The three teams that join Hopkins in the semifinals have combined to win the past 13 Division III national titles. Complete NCAA playoffs bracket

On Saturday, Johns Hopkins got two first-half touchdown runs from Stuart Walters to take a 17-7 halftime lead, The Blue Jays took the opening kickoff of the second half and went 78 yards on 13 plays, and Hogan Irwin capped the drive with a 2-yard score to make it 24-7. Junior quarterback David Tammaro added two second-half touchdowns—one on a 2-yard run, the other on a 7-yard pass to Luke McFadden to cap the scoring for JHU.

Johns Hopkins totaled 521 yards of offense on the day. Walters finished with a team-high 115 yards rushing, and Tammaro added 81 yards on the ground to go with 284 yards passing.