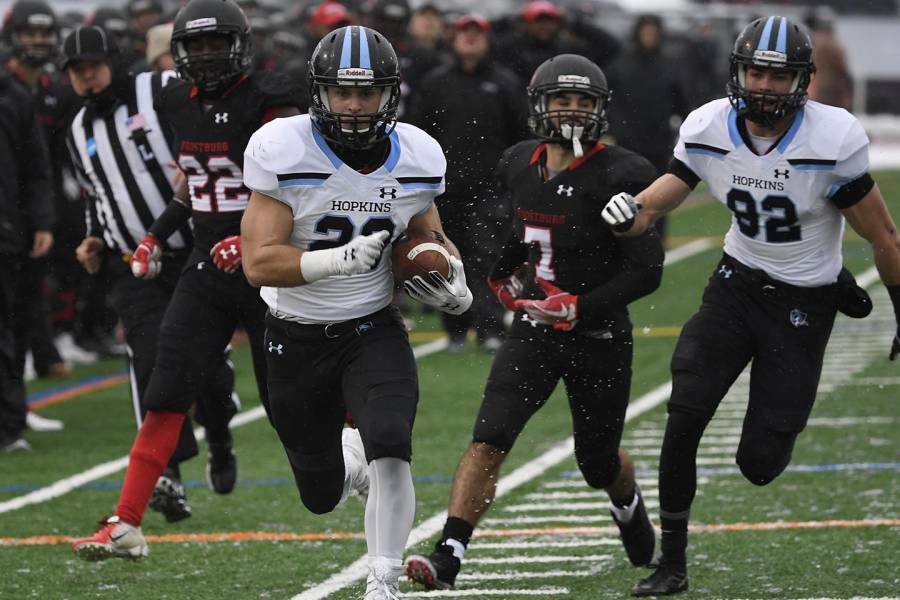 Blue Jays pile up 647 yards of offense, pull away from Frostburg for 58-27 win to advance in the Division III playoffs

The Johns Hopkins University football team piled up 647 yards of total offense and got four touchdowns from senior Tyler Messinger, pulling away in the second half for a 58-27 win against sixth-ranked Frostburg in the second round of the NCAA Division III playoffs on Saturday.

With the win, Hopkins (11-1) advanced to the quarterfinal round for the second time in the program's history. The Blue Jays will host RPI—which advanced with a 21-13 upset win against No. 3 Brockport—on Saturday at noon at Homewood Field. The winner will move on to the NCAA semifinals to face the winner of a game between Mount Union and Muhlenberg. NCAA Division III playoff bracket

JHU trailed 20-19 at halftime against the Bobcats (10-1) but scored four touchdowns in less than six and a half minutes in the third quarter to take control. Messinger gave the Blue Jays the lead for good with a 52-yard scoring run. After the Hopkins defense recovered a fumble, JHU struck again on a 2-yard touchdown run by quarterback David Tammaro.

Another turnover—this time an interception by Macauley Kilbane—set up another Hopkins scoring chance, and Tammaro connected with Luke McFadden on a 50-yard TD pass. After Frostburg went three-and-out on its next possession, Tammaro found Dane Rogerson with a 19-yard touchdown strike, giving Hopkins a 48-20 lead.

Defensively, Robert Fletcher led the way with 12 tackles—including a sack—and an interception, one of four turnovers forced by the Blue Jays.

Johns Hopkins last played in an NCAA quarterfinal game in 2009.